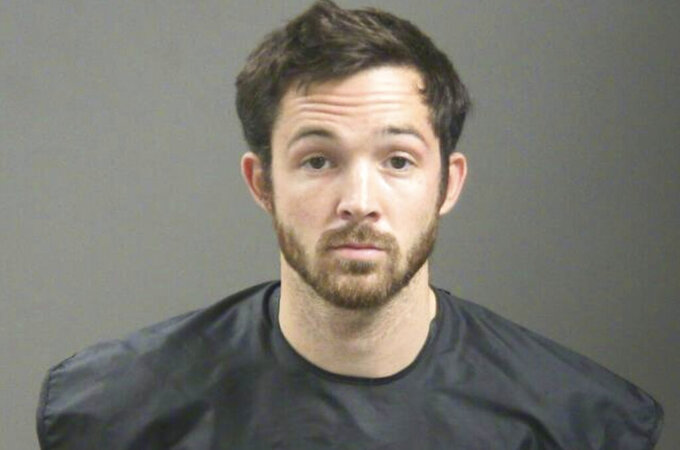 Tyson Foods’ Chief Financial Officer John R. Tyson __ a great-grandson of the company’s founder __ has been charged with public intoxication and criminal trespassing after allegedly entering a stranger’s home and falling asleep on her bed.

According to an incident report provided by the Fayetteville, Arkansas, police department, officers received a call early Sunday morning from a woman who had returned home to find a man she didn’t know sleeping in her bed.

When officers arrived, they tried to wake Tyson, but said his movements were “sluggish and uncoordinated” and there was an odor of intoxicants on his breath and body, according to the police report. His clothes were found on the floor by the bed.

He was charged with public intoxication and criminal trespassing and released late Sunday on a $415 bond. He is scheduled to appear in court on Dec. 1.

Tyson on Monday apologized for the incident and said he is getting counseling for alcohol abuse.

“I am embarrassed for personal conduct that is inconsistent with my personal values, the company’s values and the high expectations we hold for each other here at Tyson Foods,” Tyson said in a companywide memo that was provided to The Associated Press. “I made a serious mistake and this has caused me to reflect deeply on the impact my actions can have on others.”

Tyson, 32, is the son of Tyson Foods Chairman John H. Tyson. After working as an investment banker at J.P. Morgan, Tyson joined Tyson Foods in 2019 and led its sustainability and enterprise strategy teams. On Sept. 27, the company based in Springdale, Arkansas, promoted him to executive vice president and chief financial officer.

Tyson is the second high-profile food-industry executive arrested in Fayetteville in the last two months.

In September, Beyond Meat Chief Operations Officer Doug Ramsey was arrested and charged with felony battery and making a terroristic threat after biting a man's nose during an argument in a parking garage at the University of Arkansas.

Ramsey had spent more than 30 years at Tyson Foods before joining Beyond Meat last year. Beyond Meat suspended Ramsey after the incident. He left the company in mid-October.