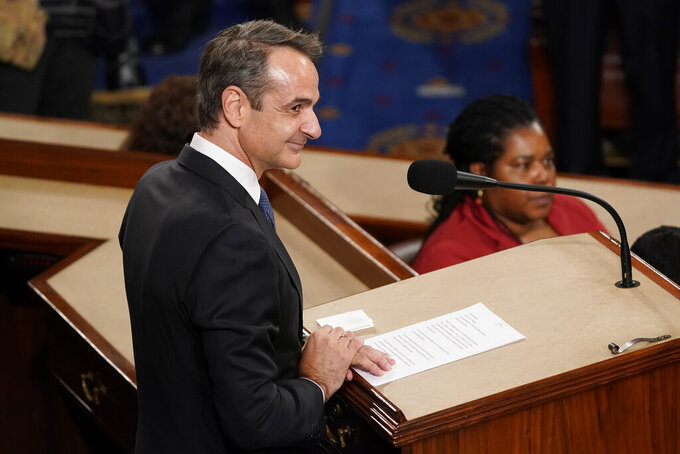 J. Scott Applewhite, ASSOCIATED PRESS
Greek Prime Minister Kyriakos Mitsotakis calls for support for Ukraine, during a speech to a joint meeting of Congress, at the Capitol in Washington, Tuesday, May 17, 2022. (AP Photo/J. Scott Applewhite)

BOSTON (AP) — Greek Prime Minister Kyriakos Mitsotakis told graduates of Boston College in his commencement address Monday that it is their sacred duty to protect democracy in an age when it is coming under increasing stress.

The future of democracy looked unassailable when his generation graduated from college in the late 1980s, Mitsotakis said, roughly the time when the Berlin Wall fell and the Soviet Union collapsed.

But the world since then has seen a rise in populist and autocratic leaders who disdain the pillars of democracy such as free expression, a free press and free elections, he said during his keynote address in front of about 4,450 graduates.

“My generation thought that democracy was easy, neglecting the fact that it requires constant effort and systematic engagement,” said Mitsotakis, whose wife and son are both Boston College alumni.

Graduates are also heading into a world at time of war in Europe that is causing untold misery and threatening a global recession, as well as during a time of climate change, human kind's most complex problem, he said.

But he expressed optimism.

“I have such great faith in your generation not to repeat the mistakes of the past," he said.

Everyone can embrace responsibility and do their part, he said.

“Your first responsibility is to radically reimagine democracy in the 21st century, by first of all, not neglecting your civic duties,” he said. “I do not suggest all of you should become politicians. But for those of you who are contemplating public service, I wholeheartedly encourage you to pursue this path. Because, think of it, if the best and brightest don’t enter the public domain, then you are leaving space for others to do so.”