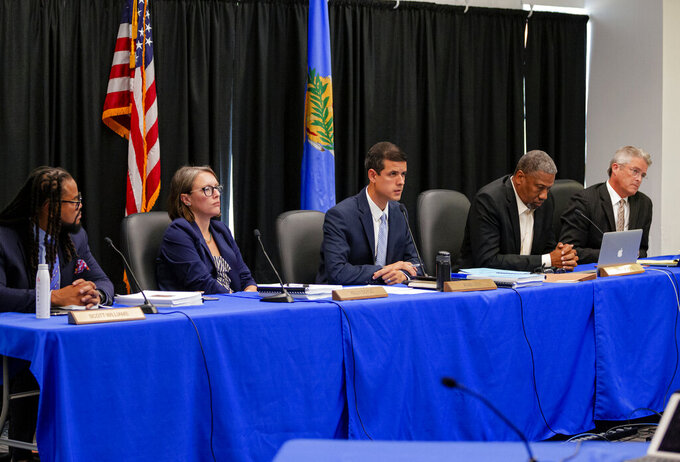 Chris Landsberger, ASSOCIATED PRESS
CORRECTS SOURCE TO THE OKLAHOMAN INSTEAD OF TULSA WORLD - The Oklahoma Pardon and Parole Board listens to presentations during the Julius Jones clemency hearing at the Kate Barnard Community Corrections Center in in Oklahoma City, Okla. on Monday, Nov. 1, 2021. The board voted 3-1 on Monday to recommend clemency for Jones and that his sentenced be commuted to life in prison with the possibility of parole. The 41-year-old Jones has always maintained his innocence in the 1999 shooting death of Edmond businessman Paul Howell. (Chris Landsberger/The Oklahoman via AP) 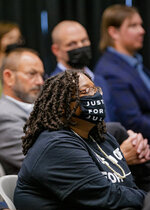 OKLAHOMA CITY (AP) — Oklahoma's Pardon and Parole Board on Monday recommended that Gov. Kevin Stitt spare the life of Julius Jones, a man who has been on death row while proclaiming his innocence for more than two decades in the 1999 killing of a suburban Oklahoma City businessman.

The board recommended in 3-1 votes that Stitt grant Jones clemency and commute his sentence to life in prison with the possibility of parole after hearing from Jones, 41, who testified via video link from the Oklahoma State Penitentiary in McAlester. Several members of the panel agreed they had doubts about the evidence that led to Jones’ conviction. One board member, Scott Williams, recused himself from the vote because of an existing friendship with an attorney who has advocated for Jones.

“I continue to believe there is still doubt in this case," said board member Kelly Doyle.

The lone vote against clemency came from Richard Smothermon, a former prosecutor, who said he believed Jones was not being truthful in his testimony.

“To believe in Mr. Jones' theory of the case, you have to disbelieve every other piece of evidence in the case," including testimony from law enforcement officers, independent witnesses and physical evidence, Smothermon said.

Jones' fate now rests with Stitt, who must decide whether to let Jones be executed or commute his sentence.

“Governor Stitt is aware of the Pardon and Parole Board's vote today," Stitt spokeswoman Carly Atchison said in a statement. “Our office will not offer further comment until the governor has made a final decision."

Stitt’s predecessor, fellow Republican Gov. Mary Fallin, rejected three separate recommendations for clemency for people on death row. The last time a governor granted clemency to someone on death row was in 2010, by Democrat Brad Henry.

The Oklahoma Court of Criminal Appeals has set a Nov. 18 execution date for Jones. The state resumed lethal injections last week after a six-year hiatus, putting a man to death for the 1998 stabbing death of a prison cafeteria worker.

Jones was convicted of first-degree murder and sentenced to die in the 1999 shooting death of Paul Howell during a carjacking in the Oklahoma City suburb of Edmond.

He admitted to the board on Monday that he began shoplifting clothes, jewelry and electronics, but denied that he ever committed any violent acts. He also denied committing a separate carjacking to which he pleaded guilty, saying he made the plea on the advice of his attorney.

“Yes, I made mistakes in my youth, but I did not kill Mr. Paul Howell," Jones told the panel.

Jones also testified that he was at home with his parents and siblings on the evening when Howell was killed, but prosecutors said Jones himself previously told his trial lawyers that wasn't true.

“Jones repeatedly and unequivocally told his attorneys that his parents were mistaken and that he was not at home the night of the murder," said Assistant Attorney General Jennifer Crabb.

Crabb said Jones is a recognized member of the Bloods gang and that he has continued to commit criminal acts while in prison, including possessing contraband and using other inmate's pin numbers to make telephone calls. She also said Jones has had so much money deposited into his inmate account in the last couple of years that he has sent $18,000 to family and friends.

Jones’ case drew attention after it was profiled in “The Last Defense,” a three-episode documentary produced by actress Viola Davis that aired on ABC in 2018. Since then, reality television star Kim Kardashian West and athletes with Oklahoma ties, including NBA stars Russell Westbrook, Blake Griffin and Trae Young, have urged Stitt to commute Jones’ death sentence and spare his life.

Jones alleges he was framed by the actual killer, a high school friend and former co-defendant who was a key prosecution witness. But Oklahoma County District Attorney David Prater and former state Attorney General Mike Hunter have said the evidence against Jones is overwhelming.

Jones also maintains his trial was contaminated by a racist juror, but the Oklahoma Court of Criminal Appeals rejected that claim.

Trial transcripts show witnesses identified Jones as the shooter and placed him with Howell’s stolen vehicle. Investigators also found the murder weapon and a bandanna with Jones’ DNA in an attic space above his bedroom. Jones said in his commutation filing that the gun and bandanna were planted there by the actual killer.

But Jones' attorney, Amanda Bass, said his criminal trial was corrupted by the use of junk forensic science, jailhouse informants and a plea deal for the co-defendant who testified against him.

“In these ways and more, the criminal justice system failed Mr. Howell," Bass said. “It also failed Julius by condemning him to death for something he did not do."

Paul Howell's sister, Megan Tobey, testified before the board that she distinctly remembers seeing Jones shoot her brother in front of his two young daughters.

“He is the same person today as he was 22 years ago. He’s still getting into trouble. He’s still in a gang. He’s still lying. And he still feels no shame, guilt or remorse for his action," Tobey said. “We need Julius Jones to be held responsible."