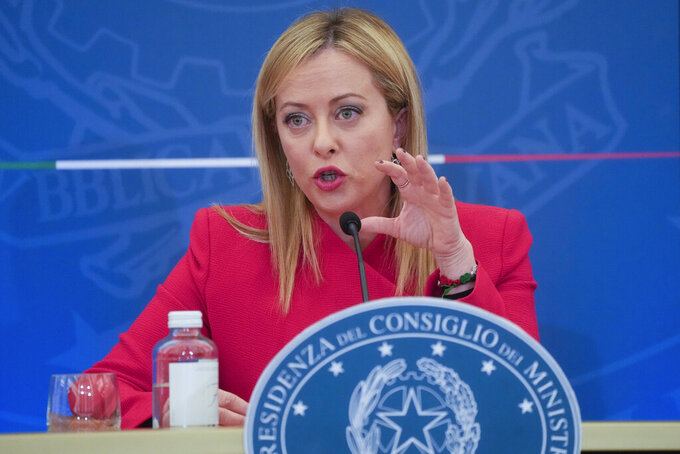 The budget modifications show a clear political shift, doing away with a basic income and a decade-old pension reform that Meloni and her right-wing allies have long attacked while coming up with new measures to promote Italy’s perennially low birth rate.

Most of the money was earmarked to maintain campaign promises to offer further help to families and businesses coping with a surge in energy costs, and was on top of more than 60 billion euros already pledged by the previous government of Mario Draghi.

The bulk of the adjustment went to tax credits and other measures to help businesses keep producing while also incentivizing them to hire women and young workers. Italy has one of the lowest rates of women in the workplace in the OECD.

Other measures also signaled a shift from previous governments, including a phase-out by the end of next year of the so-called “citizens’ wage,” the crowning achievement of the 5-Star Movement, which was in power from 2018-2021. Meloni had vowed to abolish the expanded welfare program altogether during the campaign, arguing that it encouraged people to stay on welfare when they could work and was abused by fraudsters.

The changes announced Tuesday would knock eligible workers out of the system after eight months or after they refuse a job offer, and requires recipients to actually live in Italy.

Meloni also outlined a series of initiatives to address Italy’s low birthrate. The country has one of the world’s lowest birthrates and one of its oldest populations, a “demographic winter” that experts have warned about for decades given the implications for the country’s costly pension system.

To encourage families to have more children, Meloni announced a 50% increase in the “baby bonus” checks parents receive the first year after the birth of a child and a 50% increase for three years for families with more than three children. Women who choose to extend maternity leave beyond five months for an extra month can do so on 80% of their salary rather than 30%. Meloni, Italy’s first woman premier, also announced a reduced tax on feminine hygiene products and items for newborns.

“We continue to look at today, not realizing we won’t have a tomorrow,” Meloni said of the declining birthrate.

Infrastructure Minister Matteo Salvini also announced changes to the pension system, saying people who continue working after 41 years of contributing into the pension system would receive a 10% bonus. He also announced that the government had taken the first steps to reactivate a decades-long, on-again-off-again project to build a bridge between Sicily and the Italian mainland and intended to seek EU funding for it.