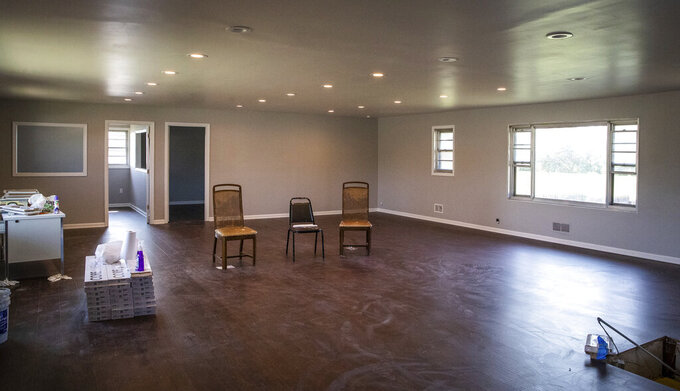 Mykal McEldowney, ASSOCIATED PRESS
ADVANCE FOR PUBLICATION ON SUNDAY, AUG. 22, AND THEREAFTER - A look inside the remodel of a former daycare, Monday, Aug. 2, 2021, that will reopen as the Ross Center East, a community center for residents near the intersection of 42nd and Post Road. Dee Ross, founder of the Dee Ross Foundation, says that there won't be any officers for staff in the community center. He wants ever room to be used for the community. There will be mental health, financial and literacy resources provided. There will be a large community garden that will stretch the entire length of the house in the back, near the Dee Ross Community Park. Downstairs will offer music and art rooms, and an intimate space for community meetings. One room in the basement will house 1,000 pre-made COVID-19 resource kits with masks, sanitizer and other goods. (Mykal McEldowney/The Indianapolis Star via AP)

Ross, who goes by Dee, was atop his tricycle on the sidewalk outside his family’s apartment. They lived at a complex just east of the intersection of 42nd Street and Post Road on the far east side of Indianapolis.

A man ran across a nearby field, shooting another person running. The shot man “laid out right in front of me” and bled to death, Ross said.

His grandmother ran out to grab Ross and bring him inside, but he was “frozen, traumatized.”

It took two decades for Ross to realize the effect that trauma had on his life. He grew up to be a Post Road gang leader and Ross, now 31, has lost dozens of friends to gun violence, many of them from the 42nd and Post community, he said.

“I didn’t have outlets or role models growing up in this area at all,” Ross said. “There really wasn’t a loving presence in our community at all.”

It took Ross watching two of his friends kill each other in 2013 for him to realize “something’s gotta give,” he said. After that “mind-shifting” encounter, Ross launched the Ross Foundation in 2014, which became a registered nonprofit in 2016.

Through the foundation, Ross set out to end generational trauma, poverty and hopelessness, he said.

“People look at me and say, ‘He’s from our neighborhood,’” Ross said. “‘He used to be in the streets. He used to live in poverty. I respect him. I can relate to him. So now, I can see myself in him.’”

The area around 42nd and Post was “thriving” for decades, Ross said. The nearby U.S. Army post at Fort Benjamin Harrison offered employment and drew people to live in the neighborhood.

But Fort Harrison’s closing in 1991 led to job loss and people moving out of the area. Apartments built to house Fort Harrison workers sat vacant, including Towne and Terrace, where Ross used to live.

Slowly, other entities began to close, leaving 42nd and Post without a pharmacy or grocery store in walkable distance. The nearest Kroger, ALDI and Walmart are all about three miles away.

Now, crime is prevalent around 42nd and Post. A 2019 IndyStar analysis found that the Indianapolis Metropolitan Police Department dispatched officers to the Towne and Terrace apartment complex more than 3,500 times from 2008 to July 2018.

Leneice Robinson moved to Indianapolis to be close to her mother after her father died. For a Robinson, she lived on the north side of Indianapolis and “loved it out there,” but eventually it got too expensive, and she found herself in the 42nd and Post area. The 42-year-old nursing assistant now lives near the corner of 38th Street and Post Road.

“The younger kids are starting to do the crimes,” Robinson said. “The government, I don’t think, cares about this area too much.”

At its root, crime is intertwined with poverty, Ross said. If people’s basic needs of food, clothing and shelter are not met, it increases crimes of necessity, which can cause mental health trauma, unemployment and declines in high school graduations.

That’s what motivated him to start the foundation in his home neighborhood, where the need was greatest and where the “burner fire” was, Ross said. The foundation’s efforts started small: food, toy and back-to-school giveaways, Easter egg hunts, peace marches.

“We realized that was just putting a Band-Aid on things — how can we get to the root causes?” Ross said. “Our strength is working outside of the four walls, getting into the trenches.”

A key way the foundation does this is through its community outreach team, led by 22-year-old Nia Belton. She and three other paid employees walk the streets of the far east side almost daily, knocking on doors and asking people what help they need. In a given week, Belton said she and her team talk with 50 or 60 neighbors.

Most residents answer their doors with skepticism, thinking the team works for “slumlords” trying to take advantage of renters, Belton said. Once they realize the Ross Foundation is only there to offer resources and services, Belton said they “appreciate that on a level that’s almost unmatched.”

“I don’t know many nonprofits willing to show up at your door to offer help,” Belton said.

“We want you to get better. We want to see the community as a whole do better.”

The Ross Foundation, in partnership with EmployIndy, also has a call center that employs about 10 people from the community to follow up on the outreach and connect people with resources they need.

Trejina Harrington’s son Dante Lott was just 16 when he was murdered April 2, 2010. Harrington “can’t even describe” the pain she’s endured every day for the last 11 years since losing her son.

“Just like an ocean wave, the grief comes and goes, comes and goes, and it will never ever cease,” said Harrington, 49, of the far east side. “Only God has kept me here to this day.”

Ross knew Dante from school and calls Harrington “mama,” she said. Harrington’s grief was still fresh when Ross asked her to be part of A Mother’s Cry, a group in the foundation for mothers who have lost children to gun violence and other tragedies.

The group can never lift away the pain of losing her son, but it gives Harrington and other mothers a space to express their grief, when and how they need to, she said. For A Mother’s Cry and all the other things Ross does in the community, Harrington said she’s “very grateful.”

“I thank God for him every day,” Harrington said. “He’s like an octopus — his arms are everywhere.”

A Mother’s Cry and other programs through the foundation rely heavily on a team of about 100 volunteers, which the foundation calls “members” said volunteer coordinator Katina Roqueta. They’re always looking for more members, she said.

Roqueta has seen the tangible difference the foundation has had. Last Thanksgiving, Roqueta knocked on a woman’s door, only to be met with anger and an attitude. As soon as Roqueta explained they were bringing a Thanksgiving meal from the Ross Foundation, the woman broke down and wept gratefully on Roqueta’s shoulder.

“Dee (Ross) thinks about that stuff,” Roqueta said. “If there’s an issue, he’s gonna get to it and make sure to turn all the stones up, to get things done correctly.”

The southwest corner of the 42nd and Post intersection looks quite different from the other three. Instead of a gas station, liquor store or fish mart, the southwest corner is home to some of the latest of Ross’s contributions to the community.

Dee Ross Community Park, constructed last summer, was built intentionally for children to have a “place to live — they shouldn’t worry about dying,” Ross said. He plans to add a paved basketball court and splash pad in the grass field surrounding the playground.

Next door is Ross Center East, a community center undergoing renovations and scheduled to open in September. Neighbors will be able to take cooking classes using ingredients from the community garden attached to the center, produce music in the basement recording studio or meet in the community room to organize a street clean-up. His goal is to open centers like this across Indianapolis and the state.

Since public transportation is sparse on the far east side, the Ross Foundation acquired a shuttle bus that will have various pick-up and drop-off locations throughout the neighborhood.

“We want to eliminate all the excuses and challenges and barriers that one may have when it comes to having access to resources,” Ross said. “That’s bridging the gap.”

Anyone on the far east side can come to the foundation for help, but it especially targets those “most likely to kill each other or be shot,” Ross said.

Many people dying from gun violence in the area are Ross’s age or younger, he said. His life story, going from gang leader to community activist, serves as a “blueprint to transition from the streets into something more positive,” he said.

“It’s not the whole community that is bad,” Ross said. “Yeah, there’s a few bad apples, so our approach to our crime prevention is to target those few bad apples with love, resources, support and a plan to help them transition out of surviving to thriving.”

To learn more about the Ross Foundation, go to www.therossfoundationcommunity.org.