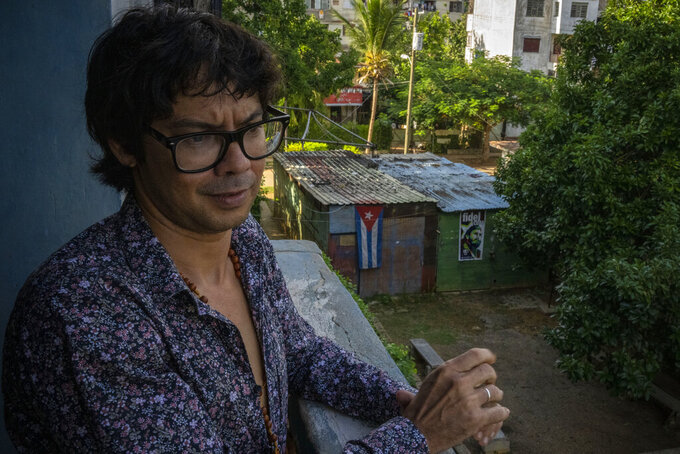 Ramon Espinosa, ASSOCIATED PRESS
FILE - Yunior Garcia Aguilera, a playwright and one of the organizers of a protest march set for Monday, poses for a photo during an interview with The Associated Press at his home in Havana, Cuba, Nov 12, 2021. A spokesman for Spain's government says that leading Cuban activist Yunior Garcia has on Wednesday, Nov. 17 flown to Madrid with his wife. His departure from Cuba was unannounced. Garcia was one of the organizers of a protest on Monday in Cuba that was suppressed by government supporters. (AP Photo/Ramon Espinosa, file)

BARCELONA, Spain (AP) — After days of mounting pressure by Cuban authorities, Yunior García, a leading activist against the communist regime who was trying to organize banned pro-democracy marches, unexpectedly left the country and flew to Spain on Wednesday with his wife.

Cuban Chancellor Bruno Rodríguez told The Associated Press that the departure of the García and wife Dayana Prieto was their personal decision and not the product of a deal between his government and Spain.

On his Facebook account, the playwright called the trip an “odyssey” and said he and Prieto were alive, in good health and with “intact ideas.”

“I have been out of communication for several days and need an update on the situation of other Archipiélago members,” he said in reference to the online discussion group of 35,000 he heads with Prieto.

Archipiélago had said on social media Tuesday that both García and Prieto were missing. The activist’s arrival in Spain was unexpected. García and Prieto arrived in Madrid on tourist visas, a Spanish government spokesman told the AP. The official was not authorized to be identified by name in the media.

Garcia was one of the organizers of an unauthorized protest Monday in Cuba that was suppressed by government supporters. Organizers complained that their homes were surrounded so they couldn’t go out while others said Cuban police warned them they would be arrested if they took to the streets.

García then announced he intended to make a solo protest walk on Sunday but government supporters prevented him from leaving his apartment building.

The Cuban government has accused the United States government of instigating the protest to destabilize the Caribbean country. García has denied that his group received foreign funding.

Javier Larrondo, president of Prisoners Defenders, a Spanish non-governmental organization promoting freedom in Cuba, said his group had no knowledge that the couple was leaving Cuba.

“We had no idea what was happening,” Larrondo told the AP. “We don’t know if it is a forced expatriation or not. The government has forced hundreds to leave in the past.”

In an interview with the AP, Rodríguez said the couple's departure was “not the decision of the Cuban government, nor the result of a judicial decision.

“I suppose that (García) is exercising the right that any Cuban has to travel and move freely,” Rodríguez said.

Archipiélago demands democracy, fair elections and “a real rule of law.” It was created after a protest movement took the streets in July and caught Cuban authorities by surprise. Hundreds of citizens were arrested after marching through cities protesting about power outages, shortages, high prices and long lines. They denounced the government as repressive and demanded more freedom.

The Cuban government has not confirmed how many people were detained, but some human rights groups said hundreds of people were either arrested or went missing after taking part in the protests.

The group's manifesto says “it is time for Cuba to be able to choose with absolute freedom, without interference and through truly democratic means, a project for a country that does not exclude any of its children.”

It is common for the Cuban government to prevent activists and journalists from leaving their homes and to interrupt their communications. Cuban authorities also cut Internet access and have approved laws so information about possible protests does not spread out to citizens.

Hours before the marches on Monday, Cuban authorities revoked the credentials of reporters from the Spanish state news agency, EFE. They were returned after the Spanish government got involved and once it was clear that the marches were not happening.