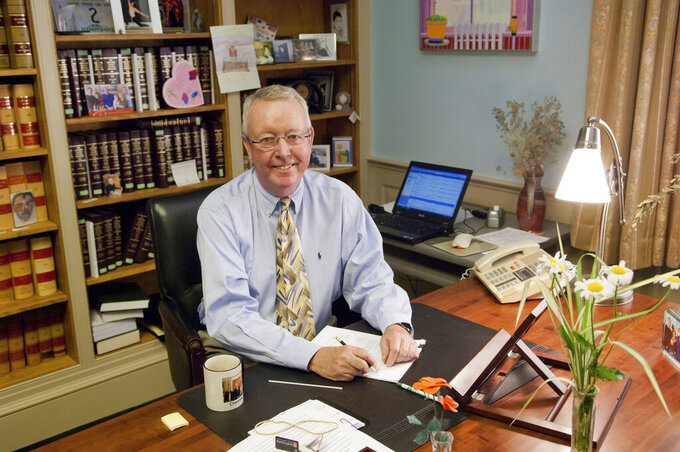 Geoff Forester, ASSOCIATED PRESS
FILE - New Hampshire Supreme Court Justice James Duggan is seated at his desk circa 2011, in Concord, N.H. Duggan, who expanded access to justice from the bench of the New Hampshire Supreme Court and as founder of the state's appellate office for indigent defendants, has died. He was 79. Duggan died Saturday, Aug. 13, 2022, at his home in Amherst after a period of declining health, according to his family. (Geoff Forester via AP)

CONCORD, N.H. (AP) — James Duggan, who expanded access to justice from the bench of the New Hampshire Supreme Court and as founder of the state's appellate office for indigent defendants, has died. He was 79.

Duggan died Saturday at his home in Amherst after a period of declining health, according to his family.

He was nominated for a seat on the state Supreme Court in 2001 by then-Gov. Jeanne Shaheen after a screening committee praised his “unusual combination of scholarliness and pragmatism” and ability to work “tirelessly, wisely and courageously for the people of New Hampshire.” When he retired in 2011, former Chief Justice Linda Dalianis called him the court’s “intellectual anchor” and praised his efforts to expand access to justice for citizens of limited means.

That work began decades earlier when Duggan was recruited by his friend Paul Semple, the state’s first full-time public defender, to open an office in Manchester. He began teaching at what was then Franklin Pierce Law Center in Concord in 1977, helped expand the public defender’s office statewide and founded the Appellate Defender Office to represent those appealing their convictions to the state's highest court.

“His commitment to the law & justice for all was unwavering, & I was honored to appoint him to the state Supreme Court back in 2001,” she said on Twitter. “His legacy of distinction lives on through the court & NH’s public defender system.”

As the chief appellate defender, Duggan argued hundreds of cases before the court, building a reputation as a trusted advocate who worked hard and stuck to the facts. Michael Skibbie, his former student who later led the office in the 1990s, said Duggan instilled in the office a belief that the way to respond to injustice was through “good lawyering.” As a judge, he led the court’s Access to Justice Commission and was a member of the American Bar Association’s Standing Committee on Legal Aid and Indigent Defense.

Duggan is survived by his wife, Helen Hartman, his sons Brian and Brendan and his sister. He was predeceased by sons Kevin and Patrick.

A reception in his honor will be held in the fall.