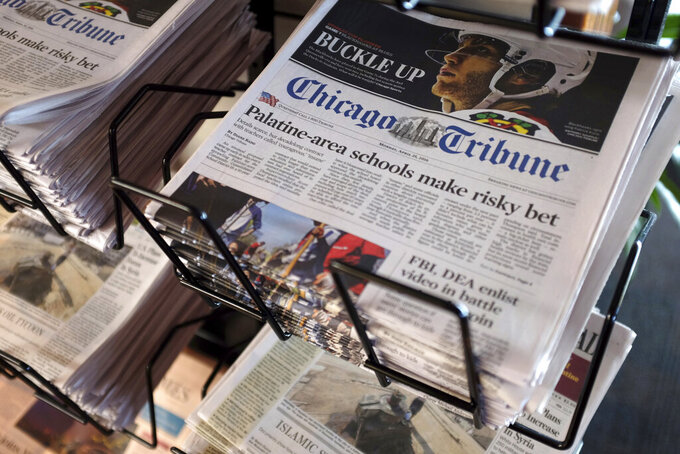 Kiichiro Sato, ASSOCIATED PRESS
FILE - In this Monday, April 25, 2016, file photo, Chicago Tribune and other newspapers are displayed at Chicago's O'Hare International Airport. Shareholders of Tribune Publishing, one of the country’s largest newspaper chains, will vote Friday, May 21, 2021, on whether to be acquired by a hedge fund that already owns one-third of the company and favors aggressive cost-cutting to boost profits. (AP Photo/Kiichiro Sato, File)

Hedge fund Alden Global Capital closed its deal for Tribune on Monday. It wasted little time installing new leadership and saddling the newspaper chain with $278 million in debt it took on for the acquisition, according to regulatory filings.

Alden, which owns the MediaNews Group newspaper chain and is the second-largest newspaper company by circulation, has a reputation as a ruthless cost-cutter in pursuit of profits. Shifting debt to Tribune's books raises concerns that the publisher would make cost cuts that hurt coverage in the company's communities. Tribune's papers include the Chicago Tribune, Baltimore Sun and Hartford Courant. Tribune reporters tweeted Wednesday that the company was offering voluntary buyouts.

The union that represents Tribune journalists had warned that Alden would use borrowed money to pay for Tribune, a tactic that would limit its ability to invest in its papers, it said. While Alden had said in December that it could “fully finance the transaction with cash on hand” and “will not require third party debt or equity,” a filing in April noted that Alden had a right to finance up to $375 million with debt.

Tribune shareholders on Friday approved the sale to Alden, which valued Tribune at about $637 million. That ended a hard-fought struggle by Tribune's journalists to find alternative local buyers out of fear that Alden ownership would hollow out their papers and prompt more newsroom layoffs.

On Monday, Alden transferred $278 million of debt to Tribune, $60 million of which Alden effectively borrowed from itself — technically, from its other newspaper company, MediaNews Group — at a high interest rate of 13%. A unit of the private equity firm Cerberus loaned $218 million, according to a Tuesday filing.

“Tribune had no debt and could invest cash flow in improvements,” said Rick Edmonds, Poynter’s media analyst. “That goes away to a degree with the new debt.” Still, he said Alden's “likely game plan” was cuts, debt or no debt.

At the end of its first quarter, Tribune had no debt and $250 million in cash, the company said in early May, even though its revenue and staff levels had been steadily declining. The newspaper industry has been contracting for years as readers shift online and companies cut back on print ads.

In a series of reports, the University of North Carolina’s journalism school has noted that the “media barons” of this century are investment firms that ramped up buying of newspapers in trouble after the 2008 recession. These hedge funds and private equity firms typically finance acquisitions with debt and then slash costs, including layoffs. Profits, the report says, are not invested in journalism but go toward debt, management fees and shareholders.

“It would not be unreasonable to predict that Alden will accelerate its cost cutting in order to meet these new obligations,” said Ann Marie Lipinski, curator of Harvard’s Nieman Foundation and former editor at the Chicago Tribune. "It’s extremely disappointing that the board and major shareholders did not prevent such a painful outcome for employees and the communities in which they work.”

Alden's debt-backed purchase appears to follow the traditional private equity model, with costs of servicing the debt imposed on the target company. What the firm will typically do is bring in managers to cut costs and make other changes aimed at improving efficiency. Sabrina Howell, a professor at NYU’s business school who is working on a paper about private equity investments in newspapers, said that newspapers acquired by private equity firms have higher digital circulation and lower rates of shutting down actual papers, compared with papers that aren't acquired, but articles in the papers become less local and more nationally focused, and newsroom employment declines.

“There do seem to be adverse effects on local government coverage and thereby on local civic engagement of citizens, which is definitely not a good outcome from the perspective of a successful local democracy,” Howell said.

Tribune itself is no stranger to cost cuts and shrinking newsrooms. Since emerging from bankruptcy in 2012 — a bankruptcy that came after it was taken private by billionaire Sam Zell and loaded with debt — its revenue and staff have shrunk. Its annual revenue has fallen by more than half since 2015, and by the end of 2020 its number of full- and part-time employees stood at 2,865 people, just 40% of its headcount five years earlier.

Alden has also removed Tribune Publishing CEO Terry Jimenez, who had publicly opposed the deal, as CEO. The hedge fund's co-founder and president, Heath Freeman, 41, is Tribune's new president. Freeman generally keeps a low profile but has said in interviews that the business model of local news was broken and Alden has bought papers that were " left for dead. ”

Representatives for Tribune and Alden did not return requests for commment.