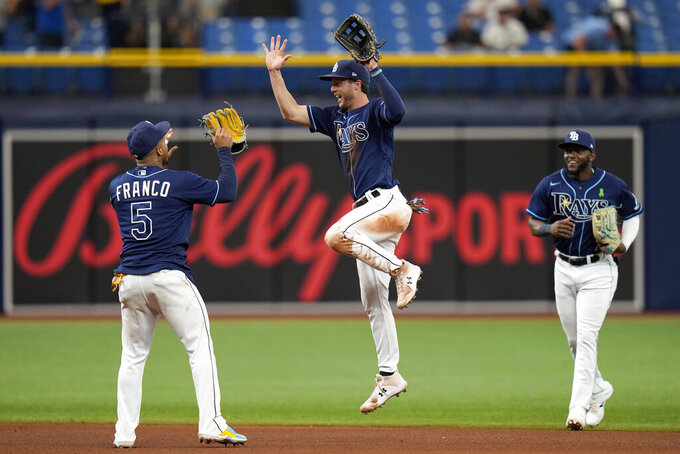 Rodriguez (1-3) lasted just one out and averaged 91.9 mph for his fastball, 2.4 mph below his season average. He left the mound with Tigers head athletic trainer Doug Teter.

“His left side is bothersome,” manager AJ Hinch said. “It got worse during his warmup. He tried to go out there, and you could tell he was off. He’ll be out for a bit. Likely IL.”

Rodriguez allowed three runs, four hits and two walks, throwing just 11 of 23 pitches for strikes. After signing a $77 million, five-year contract, he has a 4.38 ERA.

Among the Tigers rotation at the start of the season, Casey Mize, Matt Manning and Tyler Alexander already have spent time on the IL.

Drew Rasmussen (4-1) allowed four hits in five shutout innings with seven strikeouts and no walks, improving to 4-0 with a 1.01 ERA in his last five starts. Matt Wisler, Colin Poche and J.P. Feyereisen finished, with Feyereisen striking out two in the ninth during his 15th straight scoreless appearance.

Paredes, traded by the Tigers for Austin Meadows on April 5, hit solo home runs in the third off Rony García and in the eighth against Wily Peralta.

“After the first one, I heard guys in the bullpen saying some things,” Paredes said through a translator. “But after the second one, I don’t think they wanted to say anything.”

Yandy Díaz had three of the 11 hits by the Rays, who won for the fifth time in seven games.

Spencer Torkelson homered in the seventh off Wisler and has a team-high four home runs for the Tigers, who have hit a major league-low 20 homers in 38 games.

The three-run inning made it easy for Rasmussen.

“It really let me settle down and just work in the strike zone,” he said. “My goal today was to get back into my pitch count after the first (inning). Because we scored so much so early, it was easier to do that.”

Tigers: RHP Jose Cisnero, on the 60-day IL all season with a right shoulder strain, is scheduled for a bullpen session this week.

Rays: RHP Phoenix Sanders (low back spasms) was reinstated from the 15-day IL and optioned to Triple-A Durham.

Tigers: LHP Tarik Skubal (3-2, 2.50) will try to win his third straight start in Friday's opener of a three-game series at Cleveland.

Rays: LHP Ryan Yarbrough (0-0, 4.91) will make his fourth start of the season Friday night at Baltimore.