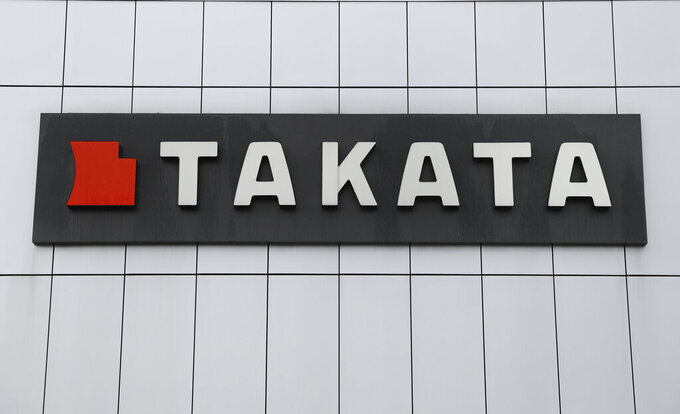 Paul Sancya, ASSOCIATED PRESS
This Sunday, June 25, 2017, photo shows TK Holdings Inc. headquarters in Auburn Hills, Mich. Over 30 million air bags in more than 200 models from 20 automakers are being investigated by a U.S. safety agency because they could explode and hurl shrapnel. The National Highway Traffic Safety Administration says in a document that it opened the probe into air bag inflators made from 2011 through 2019 by now-bankrupt Takata. (AP Photo/Paul Sancya, File)

DETROIT (AP) — Over 30 million air bags in more than 200 models from 20 car and truck makers are being investigated by a U.S. safety agency because they have the potential to explode and hurl shrapnel.

In a document posted Tuesday, the National Highway Traffic Safety Administration said it opened the probe into air bag inflators made from 2011 through 2019 by now-bankrupt Takata that weren't recalled previously.

The probe could reverse a decision made in May of last year not to recall the inflators, which contain a moisture-absorbing chemical called a dessicant.

It wasn't clear what prompted the agency to open the investigation. Last year, it decided against recalling the inflators, based largely on industry research, and said it would monitor them.

“While no present safety risk has been identified, further work is needed to evaluate the future risk of non-recalled dessicated inflators,” the agency said in the document.

Some of the most popular vehicles in the U.S. are identified in the probe, including certain Chevrolet Silverado pickups from 2014 and 2015, some Jeep Grand Cherokees from 2011 through 2019 and the Honda CR-V from 2012 through 2015.

The document posted Tuesday said none of the inflators under investigation have blown apart while in use. About 25 million vehicles have the questionable driver or front passenger inflators that were installed at the factory. At least 5 million more had the inflators installed as replacement parts for more dangerous Takata inflators that have been recalled.

NHTSA didn't immediately comment when asked what changed, prompting it to open the investigation. The agency said in a statement Monday that drivers don't need to take any action. “NHTSA will conduct a thorough investigation, and should we determine that a safety defect exists, we will act,” the agency said.

At least 19 people in the U.S. and 28 worldwide have been killed by exploding Takata inflators. More than 400 have been injured in the U.S.

The Japanese company used ammonium nitrate to create a small explosion to inflate air bags in a crash. But the chemical can become more volatile over time when exposed to moisture in the air and high temperatures. The explosion can blow apart a metal canister and hurl shrapnel into the passenger compartment.

Takata added the dessicant to absorb moisture and stop the ammonium nitrate from deteriorating. But in the document, NHTSA said at some point the dessicants will become saturated. In the most hot and humid locations, saturation can take place in five years, the agency said.

Jason Levine, executive director of the Center for Auto Safety, a nonprofit advocacy group, said he's not sure what caused the agency to change from last year. But he said NHTSA is opening the probe before something bad happens. “What's refreshing here is that NHTSA is taking a step that says we don't have to wait for a body count. That's great,” Levine said.

Under President Donald Trump, the agency enacted few safety regulations and was less active in regulating the industry than under past administrations. But Levine said it is being far more active under President Joe Biden.

Levine said the agency should have begun the investigation last year so owners of vehicles with the questionable inflators could know by now whether their air bag systems are safe or whether they're defective.

“It leaves consumers in an unnecessary state of concern,” Levine said.