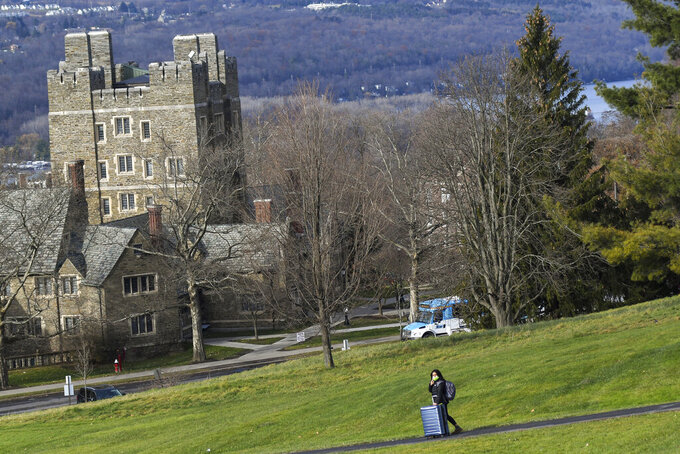 Heather Ainsworth, ASSOCIATED PRESS
FILE - A Cornell University student walks along the campus in Ithaca, N.Y., on Dec. 16, 2021, with luggage in tow. Cornell University has announced the temporary suspension of fraternity parties after a student reported being sexually assaulted on Sunday, Nov. 6, 2022, and four others were reportedly drugged at off-campus housing in recent weeks, university leaders said this week. (AP Photo/Heather Ainsworth, File)

ITHACA, N.Y. (AP) — Cornell University has announced the temporary suspension of fraternity parties after a student reported being sexually assaulted Sunday and four others were reportedly drugged at off-campus housing in recent weeks, university leaders said this week.

All of the incidents occurred at residences affiliated with registered fraternities, according to a statement to students Monday by President Martha Pollack and Vice President Ryan Lombardi.

The suspension of fraternity parties and other social events at the Ivy League university follows an emergency meeting Sunday between the Interfraternity Council, which governs recognized fraternities, and staff, the statement said. IFC student leaders made the decision voluntarily.

“Fraternity leaders will take this time to implement stronger health and safety plans," the university statement said. “No IFC-affiliated social events will resume until student leaders and Cornell staff are confident activities can take place responsibly and safely.”

The IFC did not immediately respond to a request for comment Tuesday.

A Cornell University Police alert Friday warned of at least four incidents since Sept. 24 in which students reported they had become incapacitated while attending parties off campus, despite having consumed little or no alcohol. The individuals believed they were exposed to Rohypnol, the alert said. Commonly called “roofies,” the illegal sedative is known as a date-rape drug.

On Sunday, university police said a student reported being sexually assaulted at an event between 2:30 a.m. and 4:30 a.m. that morning.

“Like you, we are outraged and saddened by the Cornell University Police Department (CUPD) crime alerts issued this weekend,” Pollack and Lombardi said.