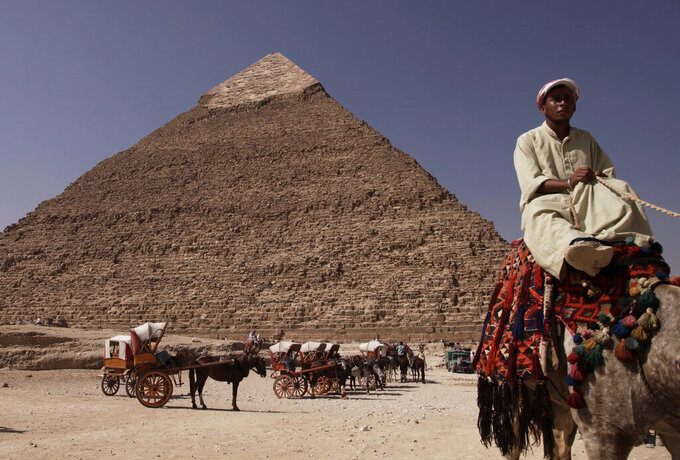 Nariman El-Mofty, ASSOCIATED PRESS
FILE - An Egyptian camel owner waits for customers to take a ride, in front of the Khafre pyramid, near Cairo, Egypt, Oct. 11, 2012. An Egyptian court on Thursday, April 21, 2022, sentenced a former member of parliament and four others to ten years in prison and 17 others to five years in prison. for smuggling antiquities out of the country. Egypt has drastically stepped up efforts in recent years to stop the trafficking of its antiquities, which flourished in the turmoil following a 2011 uprising that toppled longtime autocratic leader Hosni Mubarak. (AP Photo/Nariman El-Mofty, File)

CAIRO (AP) — An Egyptian court sentenced a former member of parliament and others to ten years in prison on Thursday for smuggling antiquities out of the country, as part of a campaign to stop the trade.

Egypt's state news agency said that former member of parliament Alaa Hassanein and four others would serve 10 years. Hassan Rateb, a prominent businessmen, and 17 others will face five years in prison. All were fined 1 million Egyptian pounds, or $54,000 roughly.

Egypt has drastically stepped up efforts in recent years to stop the trafficking of its antiquities, which flourished in the turmoil following a 2011 uprising that toppled longtime autocratic leader Hosni Mubarak. Often the suspects have been high-profile figures. In 2020, an actor and brother of the country's former minister of finance Raouf Boutros-Ghali was sentenced to 30 years for smuggling antiques.

The state news report did not specify what kind of antiquities were being smuggled — but it said that in some cases the convicted had organized and funded secret excavations. Egypt is still rich in undiscovered ancient sites dating back to the time of the Pharoahs, and its Greek and Roman era.

The country has in recent years warned foreign museums that it will not help them mount exhibits on ancient Egyptian antiquities unless they return smuggled artifacts. The Antiquities Ministry said it has retrieved more than 1,000 artifacts and around 22,000 ancient coins since 2016.

In 2019, the ministry displayed a gilded ancient coffin from the 1st Century B.C., which New York’s Metropolitan Museum of Art returned after U.S. investigators determined it to be a looted antiquity.