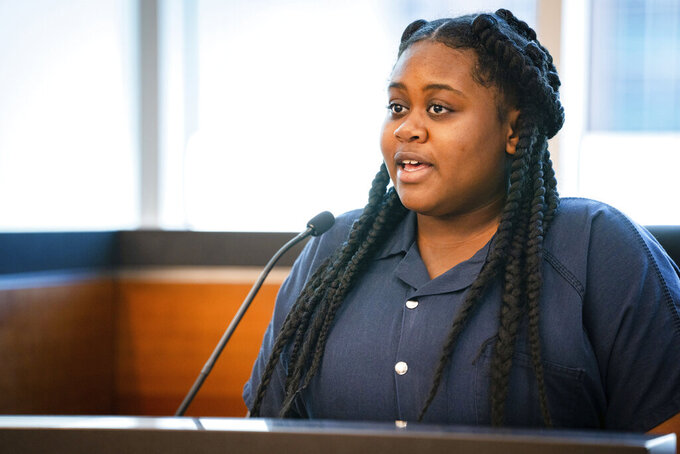 Zach Boyden-Holmes, ASSOCIATED PRESS
FILE - Pieper Lewis gives her allocution during a sentencing hearing, Tuesday, Sept. 13, 2022, in Des Moines, Iowa. Iowa authorities say Lewis, an 18-year-old sex trafficking victim who pleaded guilty to killing a man she said raped her escaped from a women's center where she was serving her probation sentence. Lewis was seen walking out of the building at the Fresh Start Women's Center in Des Moines shortly after 6:15 a.m. Friday, Nov. 4, 2022. (Zach Boyden-Holmes/The Des Moines Register via AP, File)

DES MOINES, Iowa (AP) — An 18-year-old sex trafficking victim who killed her rapist could be sent to prison after she walked away from an Iowa women’s shelter where she was serving probation following her conviction for manslaughter.

An arrest warrant was issued for Pieper Lewis, who was seen walking out of the Fresh Start Women’s Center in Des Moines shortly after 6:15 a.m. Friday, according to a report filed with the court by a probation officer and the shelter's residential supervisor. The report said Lewis cut off the GPS monitor she was ordered to wear as part of her sentence and then left the facility.

Iowa Department of Corrections spokesman Nick Crawford said Lewis had not been located as of Monday afternoon.

Des Moines Police spokesman Paul Parizek said police were notified by state corrections officials that Lewis had walked away from the shelter, and information was broadcast to officers to watch for her. He said she will be taken into custody if found and turned over to corrections officials.

Polk County Judge David Porter sentenced Lewis in September to probation for five years to be served at the women's shelter. He also gave her a deferred judgement, which meant her conviction would be expunged from her record if she completed the requirements of her probation. Porter warned Lewis at her sentencing hearing that by affording her an opportunity to avoid prison he was giving her a second chance. "You don’t get a third,” he said.

Lewis had faced a 20-year prison sentence after pleading guilty last year to involuntary manslaughter and willful injury in the June 2020 killing of 37-year-old Zachary Brooks, a married father of two. Lewis was 15 when she stabbed Brooks more than 30 times in a Des Moines apartment.

Corrections officials have asked the court to hold a hearing on their request to revoke her probation and deferred judgment and send her to prison.

Lewis has said that she was trafficked against her will to Brooks for sex multiple times and stabbed him in a fit of rage after he forced her to have sex with him again. Police and prosecutors did not dispute that Lewis was sexually assaulted and trafficked. The man she accused of forcing her to have sex with men, including Brooks, has never been charged.

Court documents indicate Lewis was allowed to leave the women's shelter to work at a local pizza restaurant. However, the documents showed, since Oct. 13 seven incidents were noted in which she did not promptly return to the shelter from work, a violation of shelter rules. The filings indicate authorities were keeping a close eye on her movements through the GPS monitor. Other violations also were noted, including an unauthorized meeting with someone she had dated in high school.

The 48-bed shelter is in a neighborhood northwest of downtown Des Moines. It is operated by the Department of Corrections for women on parole, work release or on pretrial release.

Porter also had ordered Lewis to pay $150,000 restitution to Brooks' estate, a move many people found to be outrageous. Porter said Iowa law required the restitution. Court records show Lewis' lawyer has asked the judge to reconsider and Porter ordered lawyers to file briefs on the issue by Nov. 10. He indicated he would release a decision within 30 days.

Lewis' public defense lawyer Matthew Sheeley wrote in a document filed in September after Lewis' sentencing hearing that her 28-year-old sex-trafficker put a knife to her neck and forced her to go with Zachary Brooks "to ‘turn a trick’ for $50 worth of weed.” He said the seriousness of her offense should be diminished by the fact that Brooks raped her before she stabbed him.

Sheeley asked Porter to amend his judgment and find that the restitution order is excessive and violates her constitutional rights.

A GoFundMe campaign started by a high school teacher who taught Lewis has raised over $560,000. No new donations were being accepted, according to the site.

The teacher, Leland Schipper, told The Des Moines Register that he has not been in contact with Lewis since her sentencing in September and that he is heartbroken that she has left the shelter and is concerned about her safety. He said the money remains with the GoFundMe organization and he and Lewis do not have access to it.

Court records indicate the restitution has not yet been paid.

The Associated Press does not typically name victims of sexual assault, but Lewis agreed to have her name used previously in stories about her case.