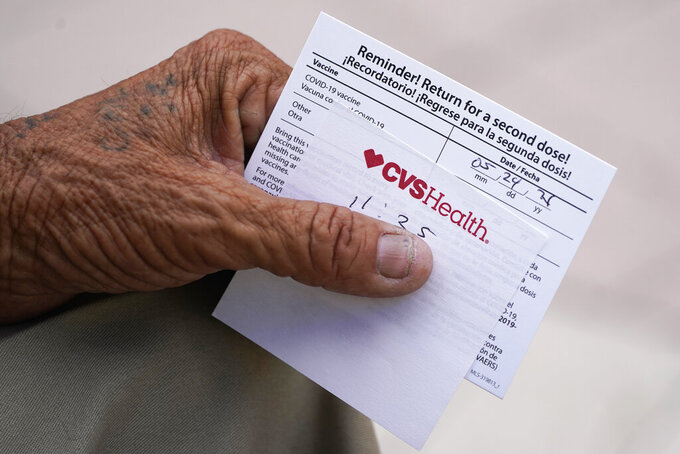 Wilfredo Lee, ASSOCIATED PRESS
FILE - In this May 3, 2021 file photo, a man holds his vaccination reminder card after having received his first shot at a pop-up vaccination site in the Little Havana neighborhood of Miami. Billions more in profits are at stake for some vaccine makers as the U.S. moves toward dispensing COVID-19 booster shots to shore up Americans' protection against the virus. Drugstore chains CVS Health and Walgreens could bring in more than $800 million each in revenue, according to Jeff Jonas, a portfolio manager with Gabelli Funds. (AP Photo/Wilfredo Lee)

NEW YORK -- New York City schools have been temporarily blocked from enforcing a vaccine mandate for its teachers and other workers by a federal appeals judge days before it was to take effect.

The mandate for the the nation’s largest school system was set to go into effect Monday.

But late Friday, a judge for the 2nd U.S. Circuit Court of Appeals granted a temporary injunction and referred the case to a three-judge panel an an expedited basis.

Department of Education spokesperson Danielle Filson said officials are seeking a speedy resolution by the circuit court next week.

— Israel says US booster plan supports its own aggressive push

— EXPLAINER: Who’s eligible for Pfizer booster shots in US?

See all of AP's pandemic coverage at https://apnews.com/hub/coronavirus-pandemic

PHOENIX — Arizona on Saturday reported 2,916 additional confirmed COVID-19 cases and 69 more deaths as the pace of virus deaths nearly doubled over the past two weeks.

The additional cases and deaths increased the state’s pandemic totals to 1,081,790 cases and 19,806 deaths, according to the state’s coronavirus dashboard.

The dashboard also reported that 1,834 COVID-19 patients occupied inpatient hospital beds as of Friday, a level below the current surge’s peak of 2,103 on Sept. 12.

Deaths are considered a trailing metric in the pandemic, with increases in the number of deaths usually trailing those of cases and hospitalizations.

ELKO, Nev. — A hospital in rural northeastern Nevada is pleading with residents to get vaccinated against COVID-19 and to take other precautions to help slow the spread of the coronavirus to “keep our healthcare system from being overrun.”

The Northeastern Nevada Regional Hospital in Elko said Friday the virus was “running rampant”″ in the region and that the hospital’s intensive care and medical-surgical units were near capacity and that it had postponed elective surgeries and added beds.

“As a hospital staff, we are pleading with you to practice the precautions we know are effective in stopping COVID-19,” the hospital said in a statement posted on social media. “Avoid large gatherings, wear a mask when around people from outside your household, observe physical distancing, and practice good hand hygiene. Most importantly, please get vaccinated against COVID-19.”

SWARTKOPS, South Africa — South Africa has sent a train carrying COVID-19 vaccines and doctors and nurses to administer them into one of the country's poorest provinces.

The vaccine train, named Transvaco, is on a three-month tour through Eastern Cape province and stop at seven stations for two weeks at a time to vaccinate people.

The initiative was launched by the state-owned rail company Transnet. It aims to meet head-on two of the biggest challenges in South Africa’s vaccine rollout: Getting doses out to areas beyond the big cities and convincing people in those areas who might be hesitant to get jabs.

The train can hold up to 108,000 vaccine doses in ultra-cold refrigerators. It has nine coaches, including accommodation coaches and a kitchen and dining area for the staff, a vaccination area and consulting rooms.

Dr. Paballo Mokwana, the train program’s manager, said medical personnel had vaccinated just under 1,000 people so far during a stop in the town of Swartkops. They’ve given jabs on the train but have also sent a vaccination team into nearby factories and businesses to administer shots to people at work.

EDE, Netherlands — The caretaker Dutch government has fired its state secretary for economic affairs after she criticized the use of COVID passes on the day the country started requiring them to enter bars and restaurants.

Prime Minister Mark Rutte said in a statement on Saturday that Mona Keijzer’s criticism of the passes was “not compatible with” the government’s coronavirus policies.

Keijzer said in an interview with Dutch daily newspaper De Telegraaf that it is “becoming increasingly difficult to explain why the pass is necessary in one place and not in another.”

Keizer is a member of the Christian Democrats, one of the four parties that make up Rutte’s coalition government.

The government is in caretaker mode amid drawn-out negotiations to form a new ruling coalition following a March general election.

JERUSALEM — Israel is pressing ahead with its aggressive campaign of offering coronavirus boosters to almost anyone over 12, saying its approach was further vindicated by a U.S. decision to give the shots to older patients or those at higher risk.

Israeli officials credit the booster shot, which has already been delivered to about a third of the population, with helping suppress the country’s latest wave of COVID-19 infections. They say they expect the U.S. and other countries to expand their booster campaigns in the coming months.

“The decision reinforced our results that the third dose is safe,” said Dr. Nadav Davidovitch, head of the school of public health at Israel’s Ben-Gurion University and chairman of the country’s association of public health physicians. “The main question now is of prioritization.”

The World Health Organization has called for a moratorium on boosters until at least the end of the year so that more people in poor countries can get their first two doses, but Israeli officials say the booster shot is just as important in preventing infections.

Israel raced out of the gate early this year to vaccinate most of its adult population after striking a deal with Pfizer to trade medical data in exchange for a steady supply of doses. It has also purchased large quantities of the Moderna and AstraZeneca vaccines.

SANTA FE, N.M. -- Recriminations about face-mask mandates are creating new tension between Democratic candidates in the election campaign for mayor in Santa Fe.

The ordinance reinforced a statewide mask mandate from Gov. Michelle Lujan Grisham in the early months of the pandemic, before vaccines were available.

Vigil Coppler says she considered the ordinance impractical but never opposed state mask requirements and called the ad a distortion.

SEOUL, South Korea – South Korea’s daily increase in coronavirus infections exceeded 3,000 for the first time since the start of the pandemic as the country comes off its biggest holiday of the year.

The 3,273 new cases reported by the Korea Disease Control and Prevention Agency on Saturday marked the 81st consecutive day of over 1,000 and were about 840 cases more than the previous one-day record of 2,434 set a day earlier.

More than 2,500 of the new cases were from capital Seoul and nearby metropolitan areas, where transmissions have accelerated despite officials enforcing the country’s toughest social distancing rules short of a lockdown since July, banning private social gatherings of three or more people after 6 p.m. unless participants are fully vaccinated.

Officials believe the virus spread further beyond the capital region during the Chuseok holidays, the Korean version of Thanksgiving which began on the weekend and continued through Wednesday, a period during which millions usually travel across the country to meet relatives. Officials say the country may see even bigger daily jumps next week as more people get tested.

Less than 45% of a population of more than 51 million were fully vaccinated as of Saturday morning.

JUNEAU, Alaska -- Alaska reported more than 1,700 resident COVID-19 cases Friday. But state health officials says that includes reports from earlier this month as they work to clear a backlog that has built up during the latest case surge.

Health officials encourage looking at cases by their symptom onset date versus the date they were submitted to the state health department.

The state epidemiologist says Alaska is in the biggest surge that it has experienced during the pandemic.

A weekly report from the department says the state had more people hospitalized with COVID-19 than it did at the peak of a prior surge late last year.

KAILUA-KONA, Hawaii — The Ironman World Championship will be held outside Hawaii for the first time in four decades.

That is due to uncertainty over whether the Big Island will be able to host the triathlon as scheduled in February because of the coronavirus pandemic. West Hawaii Today reports triathletes will instead head to St. George, Utah, to compete on May 7.

Organizers plan to bring the contest back to the islands in October 2022. Ironman participants swim, ride bikes and run a marathon. The first race was held in Honolulu in the 1970s. It moved to Kailua-Kona on the Big Island in 1981.

LOS ANGELES — Los Angeles County began making booster doses of the Pfizer COVID-19 vaccine available to eligible population groups Friday following Centers for Disease Control and Prevention endorsement of a third shot for those who got their second shot at least six months ago.

“Starting today, eligible Los Angeles County residents can begin receiving their booster dose at any of the hundreds of sites offering the Pfizer vaccine,” Public Health Director Barbara Ferrer said in a statement.

Eligible groups include people who are 65 years or older, residents of long-term care facilities, people 18 to 64 years old with underlying medical conditions and those 18 to 64 years with high institutional or occupational risk.

U.S. District Judge J. Ronnie Greer on Friday ruled Knox County Schools must implement a mask mandate to help protect children with health problems amid the coronavirus pandemic. He also blocked Lee’s order from being implemented while the legal battle continues to move its way through court.

This is the second time in a week that Lee’s order has been placed on pause as families and advocates across the state have filed a handful of lawsuits amid spiking coronavirus case numbers in schools. In Shelby County, while the school district had implemented a strict mask mandate, a federal judge indefinitely banned Lee’s order after families argued the governor’s executive order endangered their children.

ROME — Italian government workers will be heading back to offices to do their jobs after more than 18 months of remote work as part of coronavirus measures.

Premier Mario Draghi’s office says he signed a decree establishing Oct. 15 to resume in-person work. That’s the same date that all Italian workers – either in public or private employment – will need a COVID-19 Green Pass to access their workplaces.

Many public employees who serve citizens have already been working in offices. Receiving at least a first dose of a COVID-19 vaccine, having recovered from the illness in the last six months or presenting a recent negative test will secure the Green Pass.

The premier’s office says public offices “will assure that in-person return will happen in safe conditions.”

COPENHAGEN, Denmark — Norway’s Prime Minister Erna Solberg says most of the national coronavirus restrictions in the Scandinavian country will be eased.

The restrictions lifted include the requirement for serving patrons in restaurants and the 1-meter (3.3-feet) social distance rule. Eateries, bars and nightclubs will be allowed to remain open after midnight, schools and kindergartens can return to normal and “handshakes will again be allowed,” a smiling Health Minister Bent Hoeie said.

He stressed Norway will have “an increased preparedness” and local restriction will be imposed if there was a flareup.

Norway is the second Scandinavian country to end the restrictions after Denmark did so on Sept. 10.

More than 76% of Norway’s population of 5.3 million have gotten one vaccine, and nearly 70% have gotten both shots, according to official figures.