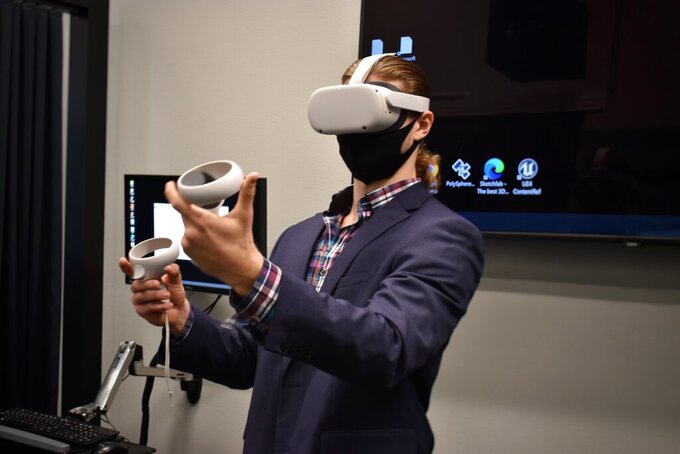 However, a partnership between the Ringling College of Art and Design and Moffitt Cancer Center is combining the two. The duo is developing a creative way for cancer patients to prepare themselves for the road to recovery using virtual reality and animation.

“The collaboration with Ringling College will focus on the patient journey and how we can create meaningful tools to help decrease stress, enhance understanding of upcoming treatments, and connect patients to survivor stories so they don’t feel so alone,” said Dr. Sarah Hoffe with Moffitt Cancer Center.

Virtual reality (VR) is the use of computer technology to generate a stimulating environment. Ringling and Moffitt are developing digital technology to ease patient stress during their MRI-guided radiation therapy.

When a patient undergoes radiation therapy, a specific area of the body is targeted for treatment. MRI, magnetic resonance imaging, is a type of scan that uses radio waves to produce detailed images of the inside of the body. The process requires the patient to remain extremely still for sometimes up to an hour.

According to Hoffe, breathing moves the targeted area of the body during treatment. She says when patients hold their breath, the radiation therapy is more precise so it doesn’t affect surrounding healthy tissue.

Just the thought of having radiation treatment sparks nervousness and anxiety. Imagine having heightened anxiety along with having to be extremely still while also holding your breath incrementally. Sounds pretty difficult right?

That’s why Ringling and Moffitt have developed a virtual breathing “game” that prepares patients for the actual MRI process. Patients choose between two themes: golf and space. The mini-games challenge the users to be still while holding their breath for 25 seconds. Ringling College senior Joseph Janssen is behind the game’s design.

Janssen spent his entire summer working to optimize the VR experience for cancer patients and has really been the leader of the project, according to his professors. He never thought that he’d be combining his artistic skill with the field of medicine.

“What’s great about is that we can combine art and design to create something that’s not only functional but also visually appealing,” said Jannsen. “So then that way, it’s easily understandable to almost any viewer or user.”

Though the process is still developing, the game is an innovative way to ease the anxiety of cancer patients through such a stressful time. Hoffe believes it could help many people.

“I think creativity is the currency of innovation,” said Hoffe. “People have to understand that medicine may not traditionally be creative, but we have to surround ourselves with those individuals who can make us better because at the end of the day I want what’s the best for my patients.”