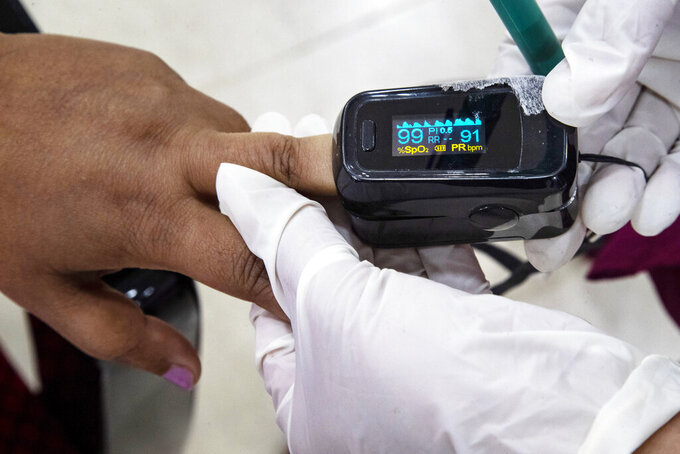 Anupam Nath, ASSOCIATED PRESS
FILE - A health worker uses a pulse oximeter to check the oxygen saturation level of another after administering COVID-19 vaccine at a hospital in Gauhati, India, Jan. 21, 2021. The clip-on devices that use light to try to determine levels of oxygen in the blood are getting a closer look from U.S. regulators after recent studies suggest they don't work as well for patients of color. (AP Photo/Anupam Nath, File)

NEW YORK (AP) — The clip-on devices that use light to measure oxygen levels in the blood are getting a closer look from U.S. regulators after recent studies suggest they don't work as well for patients of color.

The devices, called pulse oximeters, usually snap onto a finger and are widely used in hospitals across the globe to help guide treatment. At-home versions became popular during the COVID-19 pandemic.

But several recent studies have raised concerns that the pigmentation in people’s skin can throw off the readings. In 2021, the Food and Drug Administration issued a warning about possible inaccuracies after a study found the devices tended to overestimate Black patients’ oxygen levels.

“The fact that such a commonly used device could have any discrepancy at all was shocking to me,” said Michael Sjoding, a University of Michigan pulmonologist who led the study. “I make a lot of medical decisions based on this device.”

The FDA has convened a panel of experts to meet Tuesday to discuss “ongoing concerns" about the devices, recommendations for patients and doctors, and ways to gauge accuracy.

Jeff Shuren, director of the FDA’s Center for Devices and Radiological Health, called racial disparities in these devices “of great public health importance" at the beginning of the meeting Tuesday. He stressed the need to make sure medical devices are safe and effective for all the groups who use them.

Oxygen levels can also be measured by drawing blood out of an artery in the wrist. This method is still the “gold standard” for accuracy, but is a bit trickier and more painful so can’t be done as often, said Leo Celi, a physician and MIT researcher who is studying pulse oximetry.

By comparison, pulse oximeters are quicker, easier and less invasive.

When the device snaps onto a finger, it sends two wavelengths of light into the skin, explained Rutendo Jakachira, a doctoral student at Brown University who is researching pulse oximetry. By measuring how much of that light is absorbed, the pulse oximeter estimates how much oxygen is flowing through the blood.

The problem: Melanin — a natural pigment responsible for skin tone — also absorbs light, Jakachira said. And if devices aren’t built with melanin in mind, the extra absorption can throw off their readings.

Mounting evidence suggests this seems to be affecting the pulse oximeters on the market.

Sjoding’s study found that compared to white patients, Black patients in the hospital were almost three times as likely to experience “occult hypoxemia” — meaning their oxygen levels calculated from blood draws were dangerously low, but their pulse oximeter readings were still normal.

Follow-up research showed these errors can have real impacts on health. When patients didn’t have their low oxygen levels recognized, it meant delays in COVID-19 treatment, less supplemental oxygen and a higher risk of organ failure and mortality, according to several recent studies.

All of these outcomes affected patients of color more often, the research found. For many doctors, the idea that the tools they rely on could be adding to racial discrepancies came as a shock.

“These are fundamental vital signs that we use for patient care,” Sjoding said. “And so if the device is even a small bit less accurate in a particular group of patients, that’s going to have consequences.”

Small studies in past decades had hinted that skin tone might pose a challenge for the devices, but the concerns apparently “fell by the wayside,” said Johns Hopkins physician Ashraf Fawzy, who led one of the recent pulse oximeter studies. He and other doctors said they had never learned about racial gaps in pulse oximeters during their medical training.

But the COVID-19 pandemic brought more attention to the devices — and to issues of racial inequality in the health system.

Some device companies have pushed back on the suggestion that their pulse oximeters are less accurate for patients of color.

Masimo CEO Joe Kiani, whose company sells pulse oximeters to hospitals, said an internal review of their devices didn’t find evidence of a significant difference in accuracy for Black patients. He says other variables, like a delay between pulse oximeter readings and blood draws, might have affected recent studies of pulse oximeter accuracy.

Still, others are developing new devices that aim to work better for different skin tones.

Jakachira and her advisor, Kimani Toussaint, are working on a modified pulse oximeter that still shines light into the skin to measure oxygen, but looks at different properties of that light.

While technological solutions are still in the works, experts say it is important for health care workers to know the readings can be inaccurate. Sjoding said he’s started to rely less on pulse oximeter readings in his own practice. He still uses them, but as one data point that may not be perfect.

Some experts hoped that updated testing guidance from the FDA — like more specific rules on who should be included in studies — could help make sure future pulse oximeters work for everyone. The current standards suggest at least 15% of a trial group should have “darkly pigmented” skin.

It may be an “uphill battle” to change devices like the pulse oximeter, said A. Ian Wong, a pulmonary critical care doctor at Duke University — but he thinks it’s a necessary step to provide equal care to all patients.

“Medicine is a bit of an art and a science,” Wong said. “It’s more than just how a doctor practices; it’s also the tools you use.”