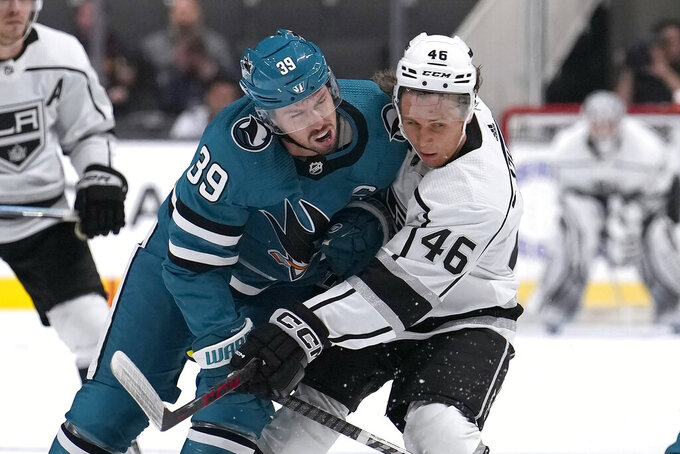 SAN JOSE, Calif. (AP) — The San Jose Sharks are a team in transition.

After missing the playoffs for a third straight season for the first time in franchise history, the Sharks overhauled the coaching staff and front office, dealt away star defenseman Brent Burns and come into the season with few outsiders expecting they can get back into contention right away.

“There is always a chance,” forward Tomas Hertl said. “We don’t like talking about there is no chance. You want to make it to the playoffs. I think we’re strong enough. If everybody plays their role we can step it up and be there. But at the same time it won’t be easy.”

The Sharks brought in new general manager Mike Grier and coach David Quinn to try to get the Sharks back to being a perennial contender in the Western Conference.

The process won't be immediate but Quinn is banking on system tweaks, added depth to the forward group and small improvements throughout the roster to improve a team that ranked 30th in scoring last year.

“We’re not going to ask a guy who’s only scored five goals in a season to score 40 goals this year,” Quinn said. “This is guys that can just be a little bit better. If we can get that throughout our lineup, there’s a difference in being a team that is in the bottom five of the league and give you a chance to be in the top 10 of the league.”

The Sharks have a few high-end players in Hertl, forward Timo Meier, captain Logan Couture and defenseman Erik Karlsson to lead the way, but still have near the lowest odds to make the playoffs in the Western Conference.

“That’s the way this game is,” Couture said. “You got to come in and get to prove people wrong on a yearly basis, whether that’s individually or as an organization. There’s always people that doubt you. But I think deep down you got to believe in yourself."

The Sharks converted on just 19% of power plays last season, a big reason for the lack of goal scoring. San Jose struggled to find a consistent group last year but Quinn said he has a simple philosophy when it comes to picking his top unit.

That should mean a unit of Couture, Hertl, Meier, Karlsson and one additional forward.

The Sharks have some promising prospects led by forwards Thomas Bordeleau and William Eklund. Both showed sparks in short stints last season with Bordeleau recording five assists in eight games late in the season and Eklund recording four assists in nine games early.

The question for the Sharks will be whether the two undersized forwards are better off spending time in the AHL or being thrown into the NHL pool.

“They have skill and they can make plays,” Couture said. “They’ve shown it at the NHL level. Just build on what they were able to accomplish last year.”

The biggest offseason change on the ice for the Sharks came when they traded Burns to Carolina. Burns had been a fixture in San Jose the past 11 seasons. He was fourth on the team with 54 points last season, often got the toughest defensive matchups and was an alternate captain.

“When you lose big personalities and people that have been in one organization for a long time, you’re going to feel like you missed that person and there’s a void,” Couture said. “But I feel like guys that we have in here are going to step up and take those minutes.”

The Sharks appeared to solve their goaltending woes last season thanks to a strong season from James Reimer, who had a .911 save percentage. Reimer will share the duties with Kaapo Kahkonen, who was acquired from Minnesota late last season.

The Sharks head to Europe to start the season, opening up with back-to-back games against the Nashville Predators on Oct. 7 and 8 in Prague. While the early start to the season and long trip provide some challenges, at least one player couldn't be happier.