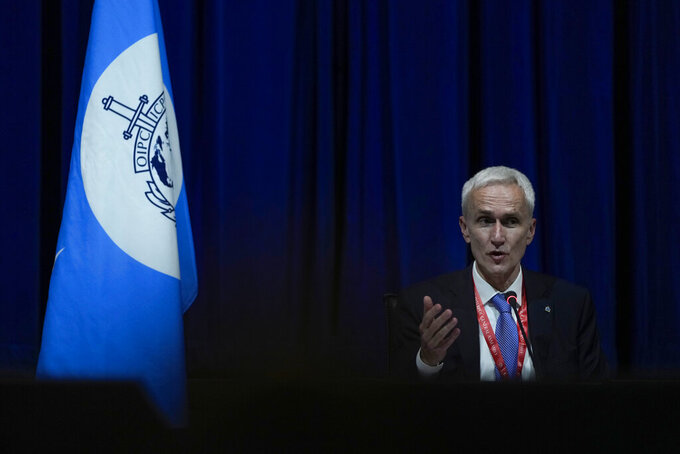 Francisco Seco, ASSOCIATED PRESS
Interpol Secretary General Jurgen Stock talks to journalists during a news conference on the first day of the Interpol annual assembly in Istanbul, Turkey, Tuesday, Nov. 23, 2021. Interpol kicked off its annual meeting in Istanbul on Tuesday, to discuss security threats and crime trends as well as to hold a closely-watched election for the international police body' new leadership. (AP Photo/Francisco Seco)

A resolution adopted at Interpol's annual General Assembly in Istanbul also calls for member countries to approve laws enabling local law enforcement to prevent and respond to online child sexual abuse cases using the technology. The resolution was adopted on the second day of the three-day meeting, according to an Interpol statement.

“Through the resolution, member countries expressed their concern at the increased use of end-to-end encryption to conceal illicit online crimes against children such as grooming, live streaming of sexual abuse and the distribution of child sexual abuse material,” Interpol said.

The resolution was overwhelmingly endorsed by delegates, the statement said. About 470 police chiefs, ministers and other representatives from more than 160 countries are attending the meeting.

The statement quoted Interpol Secretary General Juergen Stock as saying: “This issue is often presented as a zero-sum game, privacy versus child protection, but both can be protected.”

“With safety by design, service providers can meet privacy obligations and also ensure that new technologies do not come at the cost of child safety,” Stock said.

The policing body is scheduled on Thursday to hold a closely-watched election for a new leadership.

The international policing body’s first-ever Chinese president, Meng Hongwei, vanished midway through his four-year term on a return trip to China in 2018. It subsequently emerged that he had been detained, accused of bribery and other alleged crimes. Interpol then announced that Meng had resigned from the presidency.

A vice president, Kim Jong Yan from South Korea, was elected as a replacement to serve out the rest of Meng’s term.

The vote is also the subject of controversy because representatives from China and the United Arab Emirates are bidding for top posts. Critics contend that if these candidates win, their countries would use Interpol’s global reach to apprehend exiled dissidents and even political opponents at home, instead of hunting down drug smugglers, human traffickers, war crimes suspects and alleged extremists.

Human rights groups have also accused the candidate from the UAE of involvement in torture and arbitrary detentions.