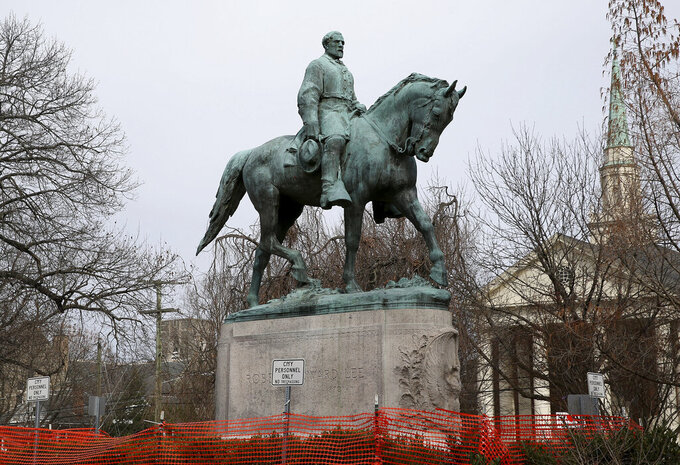 Zack Wajsgras, ASSOCIATED PRESS
FILE - The statue of Robert E. Lee is seen uncovered in Emancipation Park in Charlottesville, Va., on Wednesday, Feb. 28, 2018. Charlottesville said in a news release Friday, July 9, 2021, that the equestrian statue of Confederate Gen. Robert E. Lee as well as a nearby one of Confederate Gen. Thomas “Stonewall” Jackson will be taken down Saturday. (Zack Wajsgras/The Daily Progress via AP)

RICHMOND, Va. (AP) — A statue of Confederate Gen. Robert E. Lee that became a rallying point for white supremacists and helped inspire their infamous 2017 rally in Charlottesville will be hoisted off its pedestal this weekend and sent to storage, officials announced Friday.

The Lee statue and another Confederate tribute nearby are both scheduled to be removed Saturday, nearly four years after violence erupted at the “Unite the Right” rally. The chaos left 32-year-old protester Heather Heyer dead and sparked a national debate over racial equity, further inflamed by former President Donald Trump's insistence that there was "blame on both sides.”

A coalition of activists issued a statement Friday celebrating the announcement. Because of litigation and changes to a state law dealing with war memorials, the city had been unable to act until now.

As long as the statues "remain standing in our downtown public spaces, they signal that our community tolerated white supremacy and the Lost Cause these generals fought for," the coalition called Take 'Em Down Cville said.

Preparations around the parks where the statues stand were to begin Friday and included the installation of protective fencing, the news release said. Designated public viewing areas for the removals will be established.

Only the statues of Lee and Confederate Gen. Thomas “Stonewall” Jackson will be removed for now, the city said. The stone bases of the monuments will be left in place temporarily and removed later.

The statues are perched in places of relative prominence in Charlottesville, a small, picturesque city in the foothills of the Blue Ridge Mountains and home to the University of Virginia. Commissioned by a UVA graduate and erected in the 1920s, when Jim Crow laws were eroding the rights of Black citizens, the statues are just blocks apart from each other.

The Charlottesville City Council voted in February 2017 to take down the Lee statue amid mounting public pressure, including a petition started by a Black high school student, Zyahna Bryant.

A lawsuit was quickly filed, putting the city’s plans on hold, and white supremacists seized on the issue.

First, they rallied by torchlight at the statue in May 2017, then a small group of Klansmen gathered in July, far outnumbered by peaceful protesters.

The issue reached a crescendo in August, when white supremacist and neo-Nazi organizers of the “Unite the Right” rally gathered in the city to defend the Lee statue and seize on the issue for publicity, meeting in what was the largest such gathering of extremists in at least a decade.

They brawled in the streets near the statue with anti-racist counterprotesters as police largely stood by and watched. The scenes of intense violence shocked the nation. A short time later, an avowed white supremacist and admirer of Adolf Hitler intentionally plowed his car into a crowd of people, killing Heyer and leaving others with life-altering injuries.

Trump's suggestion at a later news conference that there had been “very fine people, on both sides” led to a crush of criticism from Republicans, Democrats and business leaders.

Charlottesville continued to fight in court for the removal of the Lee statue and additionally voted to remove the Jackson figure. But a circuit court judge prevented the city from even shrouding the statues with tarps.

After Democrats took control of the General Assembly in the 2019 elections, the monument-protection law was rewritten in 2020. Since then, local governments across the state have removed statues that stood for a century or more.

Charlottesville, however, waited for the resolution of the lawsuit, which came in April, when the state’s highest court sided with the city.

Since that ruling, the city government has been working its way through the requirements of the new law, like holding a public hearing and offering the statue to a museum or historical society for possible relocation. The offer period for Charlottesville’s statues ended Thursday.

Ten responses have been received so far, Friday's news release said, and the city remains open to “additional expressions of interest.” Under the new law, the city has the final say in the statues' disposition.

Both will be stored in a secure location on city property until the City Council makes a final decision, the news release said.

In the aftermath of the rally, Charlottesville residents unleashed a torrent of pain, anger and frustration at city and state officials, laying bare deeper issues about race and economic inequality. Activists have since pushed the city to address its legacies of racism and slavery and its dearth of affordable housing and police accountability, among other issues.

Kristin Szakos, who was a City Council member at the time of the rally, said in an interview earlier this week that there was a determination to make sure the lessons of 2017 were learned.

“It really brought up a lot of awareness of white supremacy that is not just from visitors from Idaho, but also from structures in our own culture and in our own institutions that we have to deal with. And that those are more important than just chasing Nazis out of our town,” she said.

Szakos, no longer in office, said the city has made some progress toward that work and that the statue removals will be another step in the right direction.

City officials have said they plan to redesign the park spaces where the statues are located “in a way that promotes healing and that tells a more complete history of Charlottesville.”