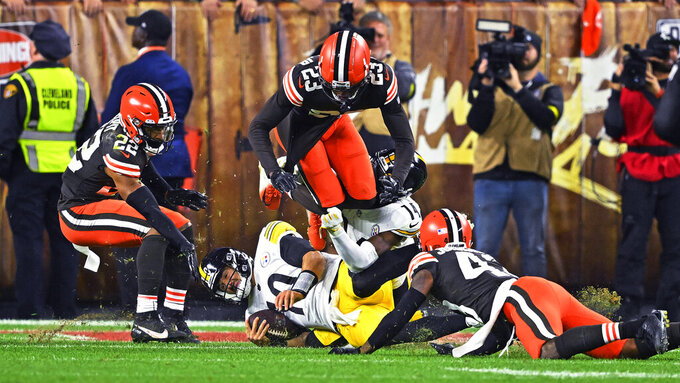 David Richard, ASSOCIATED PRESS
Pittsburgh Steelers quarterback Mitch Trubisky (10) dives into the end zone for a touchdown during the first half of the team's NFL football game against the Cleveland Browns in Cleveland, Thursday, Sept. 22, 2022. (AP Photo/David Richard)

CLEVELAND (AP) — An unimaginable collapse still fresh in their minds, the Browns managed to avoid a second one in four days.

Jacoby Brissett threw two touchdown passes, Nick Chubb ran for a score and Cleveland bounced back from its epic meltdown by finishing off the rival Pittsburgh Steelers 29-17 on Thursday night.

“We had the right men in that room to be able to get past it,” Brissett said, “and I think we answered that call. We knew it wasn't going to be easy. The guys answered the bell.”

The Browns (2-1) built a nine-point lead early in the fourth on Chubb's 1-yard run and then held on for dear life.

The Steelers (1-2) pulled within 23-17 on Chris Boswell's 34-yard field goal with 1:48 left before Pittsburgh attempted an onside kick. But unlike in Sunday's 31-30 loss, when the New York Jets overcame a 13-point deficit in the final 1:55 helped by a recovery, the Browns batted the ball out of bounds.

For a split second, it looked like Sunday all over again.

Browns coach Kevin Stefanski was asked what he was thinking as the ball bounced around near Pittsburgh's sideline. He paused for six seconds before answering.

Cleveland fans could finally exhale when cornerback Denzel Ward fell on a Steelers fumble in the end zone on the final play for a meaningless touchdown.

Brissett connected with Amari Cooper and David Njoku for TDs, and finished 21 of 31 for 220 yards. The 29-year-old had his second straight solid game as he fills in while Deshaun Watson serves an 11-game suspension.

Chubb had 113 yards and pushed and twisted across the goal line on fourth-and-goal with 9:29 left to put the Browns ahead 23-14.

Mitch Trubisky and the Steelers' stagnant offense showed signs of life in the first half, but bogged down after halftime, punting on their first three possessions while gaining just 54 yards.

“I think Mitch made some plays, but we all collectively came up short,” said Steelers coach Mike Tomlin, who said he has no plans to switch to rookie QB Kenny Pickett. "Winning is our business. I wasn’t looking to be impressed, I was looking to win the game.”

“When you try to arm-tackle Nick Chubb, he’s going to make you pay,” Heyward said. "We need to do a lot better.”

The win smoothed over a rough few days for Cleveland.

Sunday's debacle was followed by Myles Garrett criticizing fans for booing the Browns as they left the field, and a fan was arrested on charges he threw a plastic bottle in the direction of owner Jimmy Haslam on the sideline.

But there was little drama this time, just a win over their hated neighbors from Pennsylvania.

Although there was little time to recover, Garrett was confident the Browns would be able to shake off Sunday's loss.

“I didn’t have a doubt in my mind knowing this team and the guys who are on it,” he said. "I know everybody was anxious to get back on that field and get that taste out of our mouths and play a complete football game, and that’s what we did.

“Everybody did their job and all the teams came together to make it a really special win.”

Brissett's 7-yard TD pass to Njoku put the Browns up 13-7 with 8:58 left before halftime. But for the second straight week York missed an extra point.

Trubisky led the Steelers on a 75-yard scoring drive — 51 yards coming on the ground — before the QB rolled right and scored from the 1. Boswell's PAT put Pittsburgh ahead 14-13.

Steelers rookie receiver George Pickens expressed frustration about not getting the ball during a loss to New England last week, saying he was open “90% of the time.” He wasn't joking, either.

Trubisky finally hit him with a long ball, but it took a spectacular, one-handed catch by Pickens for a 36-yard gain.

Garrett failed to record a sack and remains just shy of Clay Matthews' team record of 62. The Browns All-Pro defensive end was double-teamed, chipped and was credited with just assisted tackles.

Steelers: CB Ahkello Witherspoon (right hamstring) limped off in the third quarter and didn't come back.

Browns: Walker was carted off with his left leg immobilized. Stefanski said Walker has a sprained knee and will undergo further tests. Walker appeared to get hurt when he was bent back awkwardly trying to fight off a block. ... Owusu-Koramoah (groin) didn't return. ... LT Jedrick Wills Jr. (knee) went out briefly but returned. ... DT Taven Bryan (hamstring) also was hurt in the third. ... S Ronnie Harrison injured his hamstring during warmups and didn't play.