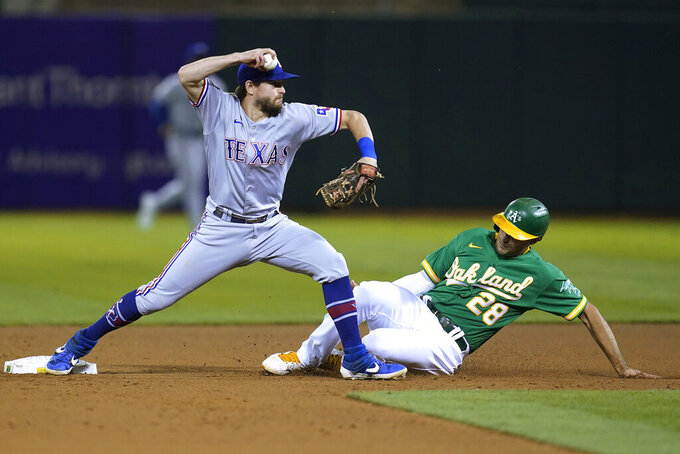 OAKLAND, Calif. (AP) — The Oakland Athletics understand the ups and downs of a season, having started 2021 with six straight losses before soon winning 13 in a row.

They are counting on a September roll carrying them to a fourth straight playoff berth.

Matt Olson had four hits and drove in four runs, Starling Marte added an RBI triple and the A's beat the Texas Rangers 10-5 on Friday night for their third straight victory.

Elvis Andrus took a pitch off his left hip from Rangers starter Glenn Otto to force home the go-ahead run in a six-run second inning. Andrus later scored on Marte's triple in the fourth that chased Otto (0-1).

“I think it was more trying to do a little bit too much at times. I need to trust in my stuff,” Otto said.

Olson hit a three-run single in the second — called out at second after a replay reversal when Texas challengegd — and an RBI single in the fourth. He set a career high for RBIs with 95, topping his previous best of 91 from two years ago.

Josh Harrison had a two-run single in the fifth for the A's (77-64), who along with the Mariners are one game back for the second AL wild card with Toronto only trailing the Yankees by a half-game.

The A's know they have work to do, a different scenario than when they won the AL West during the shortened 2020 season.

“It puts us in a different position when you’re a few games back than in the division,” manager Bob Melvin said. “The wild card has meant a lot to baseball, it’s meant a lot to teams that have a chance because of it. And I think therefore fan bases are more engaged and there are more teams that are part of it.”

Nathaniel Lowe hit a two-run double in the third then Nick Solak’s RBI single one out later chased A's starter Paul Blackburn, who is still waiting for his first win since 2018.

Blackburn allowed four earned runs on six hits over 2 2/3 innings with three strikeouts and a walk in his fifth start of the year. He has filled in admirably since right-hander Chris Bassitt took a line drive to the face at Chicago on Aug. 17 and needed surgery to repair three cheekbone fractures.

Adolis García hit an RBI single in the first for the Rangers (51-89), who had their four-game winning streak snapped that matched their longest of the year.

Kemp, who played left field, had three hits and hasn't struck out in 51 plate appearances since his last K on Aug. 17 at the White Sox.

“Just trying to keep things simple and try to help the team win any way I can,” he said of his approach.

The Rangers released him June 13 and the A’s brought back their popular designated hitter on a minor league deal Aug. 4 after he spent almost two months training on his own at home in Arizona. Davis, who led the majors with 48 home runs in 2018, was called up Sept. 1.

He struck out as a pinch-hitter to end the fourth then stayed in the game as designated hitter.

Rangers: RHP Dane Dunning was activated from the COVID-19 injured list and he pitched one inning — with a hit and strikeout — as Woodward planned as the Rangers ease him back into action initially. Texas optioned Demarcus Evans to Triple-A Round Rock.

Athletics: RHP Bassitt worked out catching footballs to get back accustomed to having a ball coming at him again, according to athletic trainer Nick Paparesta. Bassitt played catch Thursday and will throw about 20 pitches off the mound Saturday. ... RHP Mike Fiers faced hitters in a key step as he works back from a strained pitching elbow that has kept him out since May 7. ... OF Seth Brown was activated from the COVID-19 IL that sidelined him since Aug. 27 following a rehab outing with Class A Stockton on Thursday.