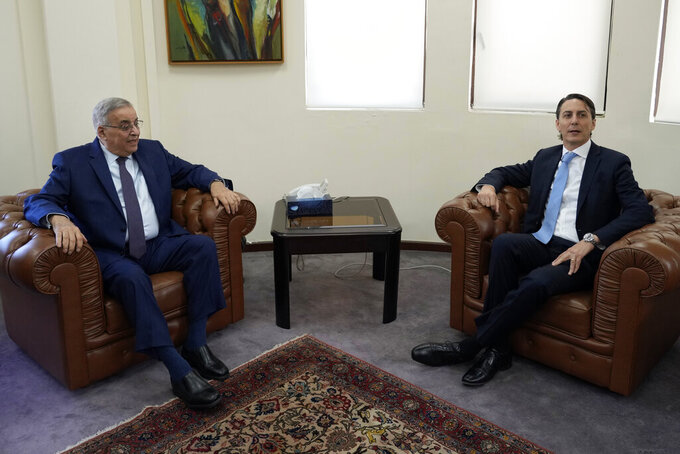 BEIRUT (AP) — Lebanon’s president on Tuesday presented suggestions related to the disputed maritime border with Israel to the U.S. envoy mediating between the two countries, the president’s office said. The envoy said the suggestions “will enable the negotiations to go forward.”

President Michel Aoun’s office released the statement following his meeting with Amos Hochstein, a senior adviser for energy security at the U.S. State Department who has been mediating between the two neighbors.

Hochstein arrived in Beirut on Monday following an invitation by the Lebanese government and after Israel set up a gas rig at its designated location at the Karish field. Israel says the field is part of its U.N.-recognized exclusive economic zone, while Lebanon insists it is in a disputed area.

Hochstein’s discussions with top Lebanese officials focused on ways to reach a solution amid rising tensions as Lebanon's Iran-backed militant Hezbollah group and Israel exchanged threats. Hezbollah’s leader last week warned he would strike the gas rig at Karish if drilling starts before an agreement is reached. The heavily armed Hezbollah, which has fought several wars with Israel, has repeatedly said in the past that it would use its weapons to protect Lebanon’s economic rights.

The U.S.-mediated indirect talks between Lebanon and Israel have been stalled since last year amid disagreements within Lebanon over how big the disputed area is.

Last year, the Lebanese delegation in the talks — a mix of army generals and professionals — offered a new map that pushes for an additional 1,430 square kilometers (550 square miles) as Lebanese territory.

In Beirut, Hochstein met with Aoun, Parliament Speaker Nabih Berri, caretaker Prime Minister Najib Mikati and other officials. He did not speak to reporters after the meetings.

Hochstein later told the U.S.-funded Alhurra TV station that the Lebanese government took “a very strong step forward” by presenting a more united approach. He refused to give details about the Lebanese suggestions, saying “it’s about looking at what kind of a compromise can be reached that the Israelis can agree to and not feel that it is being pushed into something against their interest while still preserving the most important part of Lebanon’s interest.”

“I think that it will enable the negotiations to go forward,” he said.

Hochstein added that a solution to the border crisis would help Lebanon pull out of its economic meltdown that began in October 2019 leaving more than 75% of its people in poverty.

A Lebanese official who attended the meetings told The Associated Press that they focused on the disputed area of the Mediterranean and that the additional area Lebanon was pushing for — known in Lebanon as Line 29 — was shelved.

“The Israelis are totally refusing to talk about Line 29,” the official said, speaking on condition of anonymity because he was not authorized to discuss the negotiations with the media.

Lebanese media reported ahead of Tuesday’s meetings that Aoun would put forward several proposals, including one which shows readiness to give Israel full control of Karish field in return for Lebanon getting the Qana field, part of which stretches deep into the disputed area.

The anonymous official said Lebanon wants to get full control of the Qana field and has reservations about Israel working in the Karish field without a final agreement with Lebanon.

During a visit to Lebanon in February, Hochstein had handed Lebanese officials a proposal from Israel which gives more than half the disputed area to Lebanon. Lebanon did not respond to the proposal at the time.

Aoun’s office said he gave Hochstein a response to his February proposal to forward it “to the Israeli side." Aoun told the U.S. envoy he hopes that Hochstein would return soon to Lebanon with Israel’s answers.

Meanwhile, Israeli Prime Minister Naftali Bennet criticized the Lebanese leadership, saying on Tuesday that instead of using gas “for the benefit of its citizens, that same leadership is busy fighting with internal and external disputes.”

The dispute over the maritime border is more than a decade old. In 2012, Lebanon rejected an American proposal of getting 550 square kilometers (212 square miles), or almost two thirds of the area, while Israel would have gotten the remaining third.

The offer was known at the time as the “Hoff Line,” after U.S. diplomat Frederick Hoff who was mediating then between the two countries.