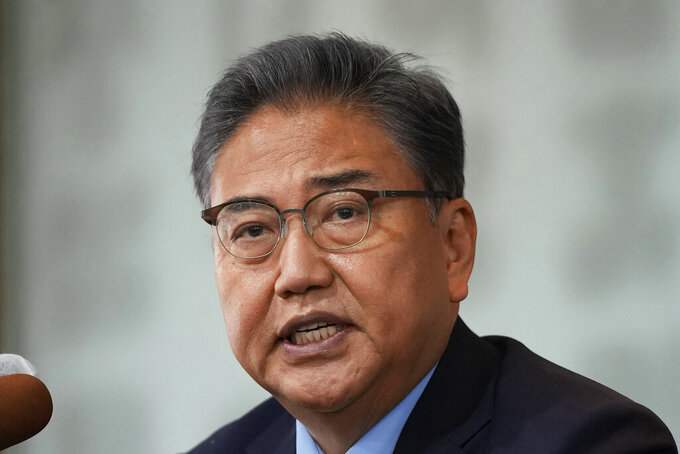 SEOUL, South Korea (AP) — South Korea’s opposition-controlled National Assembly passed a motion on Thursday calling for the dismissal of the foreign minister over a series of alleged diplomatic missteps, including controversial remarks by President Yoon Suk Yeol caught on a hot mic in the United States.

The motion isn’t legally binding and doesn’t suspend Foreign Minister Park Jin. But the attempt to oust a key Cabinet minister and close confidante of Yoon and the president's likely rejection of the motion could further aggravate political strife between the conservative president and his liberal rivals.

The 299-member National Assembly approved Park’s no-confidence motion by a 168-1 vote. One lawmaker cast a blank ballot, while outnumbered governing party lawmakers and others opposed to Park's dismissal boycotted the vote.

The motion, introduced by the main opposition Democratic Party, held Park responsible for what it called “an unprecedented diplomatic disaster” resulting from Yoon’s recent trip to Britain, the United States and Canada. The motion said the trip made no diplomatic achievements and undermined South Korea’s national interest and international image.

At the heart of the alleged blunders cited in the motion were comments made by Yoon in New York after a brief chat with President Joe Biden at a Global Fund conference last week.

A microphone belonging to South Korea's MBC television caught Yoon talking to Park and other aides. Some parts of the audio were unclear, and MBC added subtitles reading “Wouldn’t it be too darn embarrassing for Biden if those idiots in the legislature don’t approve?” The subtitles suggested Yoon was insulting Biden and the U.S. Congress over its possible rejection of Biden’s plan to contribute to the global initiative.

After the video was widely shared on South Korean social media, Yoon’s office denied he was referring to Biden or the U.S. Congress. Yoon later accused the media of damaging South Korea’s alliance with the United States with inaccurate reporting.

Other alleged diplomatic failures listed in the motion included “a humiliating” unilateral attempt to improve relations with Japan that it said had not achieved any progress in defusing bilateral disputes over history. The motion also accused Yoon of failing to properly convey South Korean concerns to Biden about a U.S. law that excludes electric vehicles built outside North America from U.S. subsidies.

Yoon’s office responded that talks he held with Japanese Prime Minister Fumio Kishida in New York last week created momentum to improve ties. It said Yoon confirmed in his meeting with Biden a U.S. willingness to cooperate with South Korea on the law on electric vehicles and other issues.

Yoon’s likely rejection of the dismissal motion would be a political burden for him because the Democratic Party is likely to criticize him for ignoring the legislature. But the Democratic Party is also facing criticism that it used Park as a scapegoat because the National Assembly has no right to pass no-confidence motions for senior presidential officials, who observers say were more directly responsible for the recent diplomatic issues than Park.

Speaking with journalists over Park’s fate earlier Thursday, Yoon indicted he won’t accept the no-confidence motion. He called Park “a person with outstanding capacities” who overworks for the sake of the national interest and that the public can distinguish between right and wrong.

Jang Hye-young, a deputy floor leader for the small liberal Justice Party which boycotted the vote, urged Yoon to apologize over the hot mic comments. But she said it was Yoon's top deputies at the presidential office who must be held accountable for the other issues, not Park.

Since taking office in May, Yoon’s government has been on a collision course with the Democratic Party on a number of issues including the government’s push to investigate past cases allegedly involving the party’s current chief and others who served in the previous liberal government.