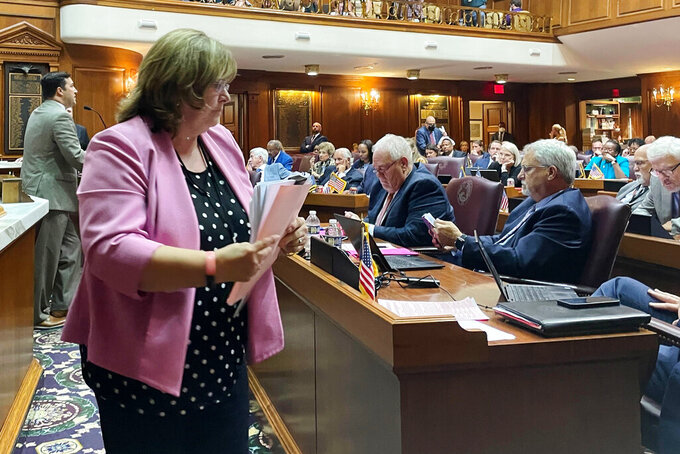 INDIANAPOLIS (AP) — A deeply divided Indiana House voted Thursday to keep exceptions in cases of rape or incest in a bill that would ban nearly all abortions in the state.

The Republican-dominated House voted 61-39 to defeat an amendment that would have removed those exceptions, with a majority of GOP members wanting their removal.

The House vote displayed a similar division among Republicans seen in the state Senate over exceptions for rape and incest, which remained in the bill when an attempt in the Senate last week also failed to strip those exceptions.

Republican Rep. Karen Engleman sponsored the amendment, arguing that even a child conceived in a rape or incest attack deserved a chance at life.

“The intentional ending of human life has no place in medical practice,” Engleman said.

The Indiana proposal follows a political firestorm over a 10-year-old rape victim who traveled to the state from neighboring Ohio to end a pregnancy. The case gained wide attention when an Indianapolis doctor said the child had to travel to Indiana because a new Ohio law bans abortions if cardiac activity can be detected, usually around six weeks of pregnancy.

Democratic legislators questioned Engleman on whether that girl’s abortion would be prohibited if her amendment was adopted. Engleman, who said she had a child as an unmarried teenager, responded that doctors could still determine whether the pregnancy threatened the life of a young girl.

Republican leadership said earlier this week that they support exceptions in cases of rape and incest. Republican House Speaker Todd Huston and GOP Rep. Wendy McNamara of Evansville, who is sponsoring the bill in the House, both said Monday that they favored allowing those exceptions.

McNamara said Monday that the law needed to be “conscientious of those people who experienced trauma in rape and incest situations.”

While 39 House Republicans voted Thursday to strip the rape or incest exceptions from the bill, 32 Republicans joined all 29 House Democrats in keeping them in the bill. With a likely unified Democratic opposition to the full bill, Republican opponents of the exceptions will have to vote in favor of the bill for its passage. That vote could come Friday.

The Republican-controlled state Senate narrowly passed its abortion ban Saturday, 26-20, securing the minimum 26 votes needed to send it on to the House.

The House on Thursday also rejected, largely on party lines, a Democratic proposal that called for placing a non-binding question on the statewide November election ballot: “Shall abortion remain legal in Indiana?”

The proposal came after Kansas voters on Tuesday rejected a measure that would have allowed the state’s Republican-controlled Legislature to tighten abortion restrictions or ban the procedure outright. The vote was the first test of voters’ feelings about abortion since the U.S. Supreme Court overturned Roe v. Wade in June.

McNamara spoke against the ballot question, pointing out that Indiana law doesn’t provide for statewide referendums. The only such statewide votes are on proposed constitutional amendments after they've been endorsed two separately elected Legislatures.

Democratic Rep. Sue Errington of Muncie argued that Indiana voters want the chance to express their view on whether abortion should be legal.

“I don’t know if it will come out like it did in Kansas,” Errington said. “I hope it does, but I don’t have that guarantee.”

Last week, thousands of demonstrators on all sides of the abortion issue filled Statehouse corridors and sidewalks around the building as the Senate debated the bill. More than 100 people testified during an approximately nine-hour House committee hearing Tuesday. Only a handful of demonstrators watched Thursday’s debate from outside the chamber and in its gallery.

A House committee on Tuesday moved forward its version of the Senate-approved bill. The House bill would allow abortion exceptions for the physical health and life of the mother, as well as if a fetus is diagnosed with a lethal anomaly. It also adjusted the time frame when abortions would be permitted in cases of rape and incest.

Arleigh Rodgers is a corps member for the Associated Press/Report for America Statehouse News Initiative. Report for America is a nonprofit national service program that places journalists in local newsrooms to report on undercovered issues. Follow her on Twitter at https://twitter.com/arleighrodgers