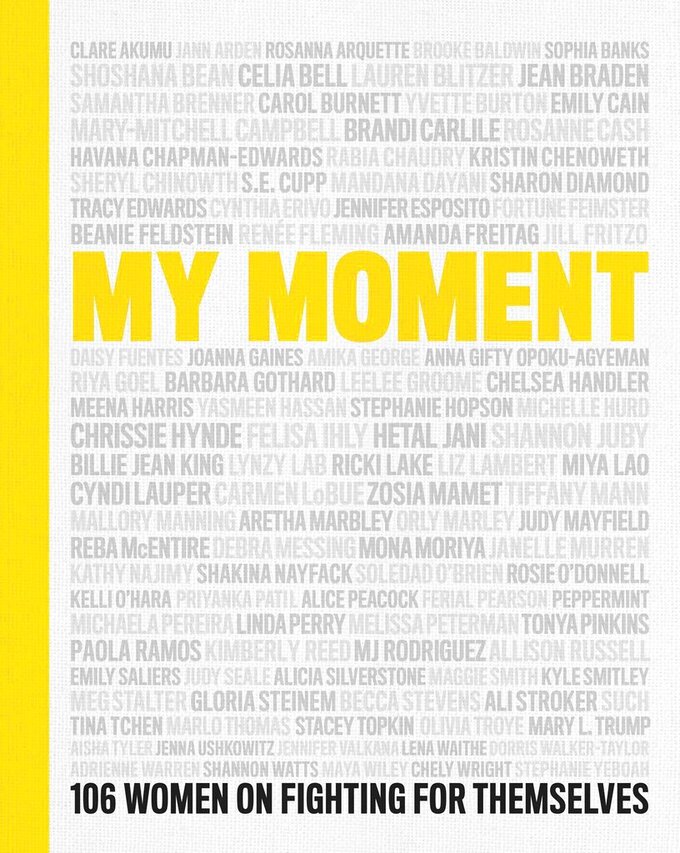 Uncredited, ASSOCIATED PRESS
This cover image released by Gallery Books shows "My Moment, 106 Women on Fighting for Themselves," a collection of essays. (Gallery Books via AP)

Havana Chapman-Edwards was the only kid at her school to participate in the 2018 walk out. Celia Bell chose life after her mother’s death. Emily Cain found herself laughing after losing her Congressional election. Jean Braden learned how to negotiate for herself when her husband died.

Though these women are unique to each other, they’ve all chosen to fight for themselves.

“My Moment: 106 Women on Fighting for Themselves” showcases short essays ranging from a single sentence to a few pages, each accompanied by a black-and-white portrait of the author. The voices in “My Moment” run the gamut of age, race, gender, ability and privilege. Its immense diversity offers numerous chances for readers to connect with the situations and people therein.

Many responses follow a pattern — understandably, since they’re based on the same prompt — where the storyteller describes a time they were put down in some way, decided enough was enough and from that moment forward recognized their self worth and stood up for themselves or others.

Some answers, however, hardly hold connection to the original question, “What was the moment in your life when you realized you were ready to fight for yourself?”

The compilation kicks off with a single sentence from musician Chrissie Hynde. Later, there’s a free-form poem. It doesn’t take but a handful of these stories to see that the form the responses take hardly matters. Actually, the oddballs among them serve to accentuate the theme of the whole book: These women have had enough and will do what they believe is right, even if — especially if — it doesn’t fit into the prescribed mold.

Variety aside, “My Moment” gets tiring and repetitive. After all, as the title says, there are over a hundred of them.

More monotonous sections would have benefited from simply rearranging the stories. Other sections resonated strangely and showed a lack of attention and care.

Despite having completely different messages, some essays were roughly clumped by a perceived shared theme. For example, four mismatched accounts of addiction, eating disorders, and healthy and unhealthy weight loss were all smoosh together in a confused confluence of morphed body and beauty perceptions. On their own, the stories are moving. Together, they're discordant.

Thankfully, the shortcomings of the text are not shared by the images. “My Moment” contains absolutely stunning pictures. The photographers are the authors themselves, their mother, sister, partner or best friend, and they capture the entirety of their subjects. Each portrait is loaded with personality and serves as a beautiful complement to the accompanying short essay.

If you’re looking for an empowering front-to-back read, this probably isn’t it. “My Moment” is a nice coffee table book — something to pick up and pick through a piece at a time, skipping to a section by a woman you admire or turning to a page at random to see where it takes you.