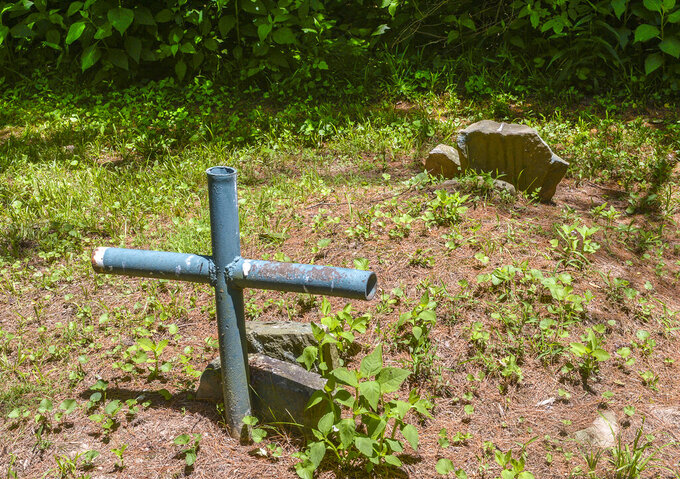 Kenny Kemp, ASSOCIATED PRESS
The gravesite of Harry Trump, a son of farmstead founders Richard and Mary Trump, lies at the edge of a hayfield Tuesday, June, 21, 2022 near the Trump-Lilly Farm in New River Gorge National Park and Preserve in Hinton, W.Va. (Kenny Kemp/Charleston Gazette-Mail via AP) 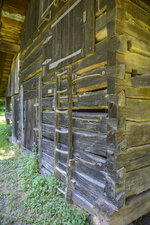 HINTON, W.Va. (AP) — Across the New River from Hinton, narrow, unpaved Freezeland Mountain Road zigzags its way up narrow hollows, across spiny ridges and through dense stands of hardwood forest, climbing 1,200 feet above the river in 2.5 miles.

There, the terrain begins to level, forming a gentle bench, as the road makes a gentle curve just upslope of a white, two-story farmhouse with a huge stone chimney, surrounded by shade trees, a hand-riven picket fence, a collection of outbuildings and an expanse of pasture.

Welcome to the 130-year-old Trump-Lilly Farmstead, a 202-acre tract just inside the southern boundary of New River Gorge National Park and Preserve, and one of the park’s least-visited points of interest.

The site “exemplifies an Appalachian frontier farmstead little altered since its development,” according to historian Leigh McGowan’s narrative accompanying the farm’s 1990 listing on the National Register of Historic Places. “All the farmstead’s buildings and fences are original, with no major modifications.”

Even the road leading to the farmstead and beyond follows the route of the original 19th-century wagon road “through landscapes which have changed little,” according to the narrative.

The farmstead lies on land acquired by descendants of William Richmond, a Revolutionary War veteran and one of the earliest settlers in the south end of what is now New River Gorge National Park and Preserve.

In 1799, Richmond settled a tract of bottom land along the river in Raleigh County adjacent to Sandstone Falls. On the west side of the river-wide cataract, initially known as Richmond Falls, the settler and his family built a grist mill, and in calmer waters near the falls, established a ferry service.

Among properties added to the family’s land holdings during the 1800s was the upland tract that became the Trump-Lilly farm. In 1888, that property was deeded to Mary Richmond Trump, a third-generation descendant of the former Revolutionary War soldier, by her father, William C. Richmond. Mary Richmond married Richard Trump five years before being given the land.

By the mid-1990s, the couple had built much of the farmstead as it appears now.

The centerpiece of the property is its two-story, four-room farmhouse, built of squared chestnut logs secured with half-dovetail corner notching, and heated by a huge sandstone chimney and fireplace. A one-story log addition housing a kitchen was attached to the home.

The wooden shakes on the roof of the farmhouse were later overlaid with asphalt roofing. Since 1934, poplar clapboard siding has covered the exterior log walls.

Outside, a hand-made oak picket fence encompasses the farmhouse’s lawn. Nearby outbuildings include a spring house for refrigerating perishable foods, a washhouse for bathing and laundry, a shed for storing salted meats, a two-story chestnut log granary and an outhouse with seating for two.

A sheep barn built of round chestnut logs can be found in a field just downhill of the farmhouse, while the farm’s main barn, which once sheltered draft horses and milk cows below its hayloft, is located near the farmstead’s small parking area. There, National Park Service signs provide visitors with information about the farm and the people who once lived and worked here.

Most of the repair and stabilization work that has taken place at the farmstead has focused on the main barn. When the farm was bought by the National Park Service, the barn’s roof had collapsed and its walls were out of alignment and unstable. Since then, a new truss-supported tin roof has been added and the barn’s walls have been straightened, cabled together and anchored to posts.

To the north of the barn and parking area, the remnants of an orchard that once included nearly a dozen varieties of apples continue to produce fruit.

At the edge of a hay field north of the orchard, the grave of Harry Trump, a child of the couple, can be found. According to a walking tour brochure for the farmstead, the child died after eating poisoned corn.

In 1905, the couple sold the farm, which changed hands again several times until it was bought by Arden J. Lilly. Under Lilly family stewardship, the subsistence farming practices of the Trumps were expanded and enhanced.

In 1963, Lilly sold the farm to a son, who worked off the property and in turn sold it to David Rosenberger, who used the farm as a vacation rental property before selling it to the National Park Service in 1989.

The park service maintains a second, easier-to-reach 19th-century subsistence farm a few miles east of the Trump-Lilly Farmstead on a stretch of bottomland fronting the New River.

The Richmond Hamilton Farm lies on a portion of the original tract of land William Richmond acquired and occupied in 1799. It is one of several subsistence farms carved from the land settled by the Revolutionary War veteran and deeded to his married children and their descendants.

Though smaller and less documented than the Trump-Lilly Farmstead, the Richmond-Hamilton Farm served the same purpose, only on richer, easier-to-till land.

The site includes a late 19th-century farmhouse, barns and other outbuildings built with notched chestnut logs.