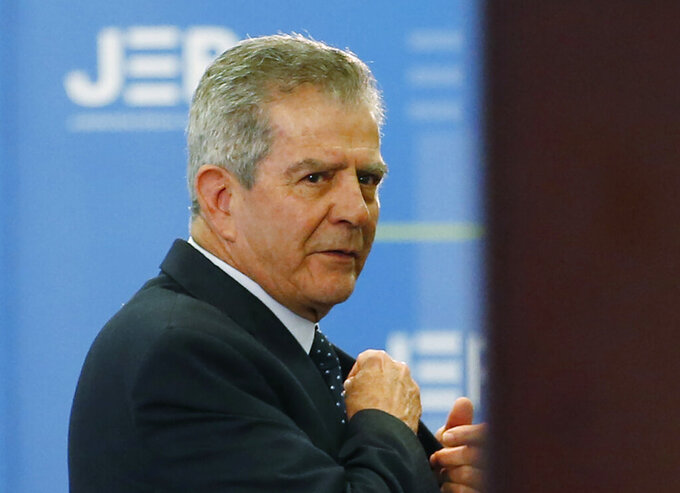 Fernando Vergara, ASSOCIATED PRESS
FILE - In this Oct. 17, 2018 file photo, former Army General Mario Montoya arrives to testify before a peace tribunal investigating his role in extrajudicial killings of civilians during Colombia's long, armed conflict in Bogota, Colombia. Bogota’s Superior Tribunal ruled Monday, August 30, 2021, that Montoya is not under the jurisdiction of ordinary courts because he is cooperating with a special tribunal created by the 2016 peace deal between the government and the now disbanded Revolutionary Armed Forces of Colombia and has refused to allow a trial for the retired general accused of offering incentives that led soldiers to murder 104 civilians and pass them off as guerrilla fighters killed in combat during Colombia’s long civil conflict. (AP Photo/Fernando Vergara)

BOGOTA, Colombia (AP) — A court refused Monday to allow a trial for a retired general accused of offering incentives that led soldiers to murder 104 civilians and pass them off as guerrilla fighters killed in combat during Colombia's long civil conflict.

Mario Montoya had appeared at a court hearing last week, where he was going to be charged with murder by the Attorney General's Office. But Bogota's Superior Tribunal stopped prosecutors from pressing charges while they considered the case.

The court ruled Monday that Montoya is not under the jurisdiction of ordinary courts because he is cooperating with a special tribunal created by the 2016 peace deal between the government and the now disbanded Revolutionary Armed Forces of Colombia.

The ruling will be appealed by relatives of civilians killed by soldiers under Montoya's command, who are hoping that the case sets a powerful precedent.

Montoya was commander of Colombia's army between 2006 and 2008 and is the highest ranking officer who has faced charges so far over the executions of civilians, who were abducted by soldiers, killed and presented as rebel fighters in what is known as the “false positives" scandal.

Prosecutors say they have gathered evidence proving Montoya pressured his subordinates to increase the number of enemy fighters killed in combat and rewarded soldiers who provided the most kills with vacations and promotions. This policy allegedly motivated some soldiers to abduct civilians, murder them and present them as dead guerrilla fighters.

Montoya denies the charges. He says he sought only to get tactical results from his subordinates in fighting the rebels and did not seek greater kill rates.

Under Colombia's peace deal with the FARC, soldiers and guerrilla fighters accused of war crimes can choose to collaborate with the tribunal known as the Special Jurisdiction for Peace. Those who help investigations and tell the truth about war crimes can avoid time in prison, and will instead receive alternative sentences that include paying reparations to victims or conducting community service.

Montoya has been cooperating with the tribunal since 2018.

Attorney General Francisco Barbosa, however, argued in a radio interview last week that he was constitutionally entitled to investigate accusations against the former general and did not want human rights abusers to “profit from the inaction of prosecutors.” Barbosa said evidence gathered against Montoya will be handed over to the peace tribunal, which can use it to further its own investigations.

According to the peace tribunal, at least 6,402 civilians were murdered by the Colombian army and presented as “false positives” between 2002 and 2008, when the killings were first revealed by journalists. In all, an estimated 262,000 people died as a result of the five-decade conflict.