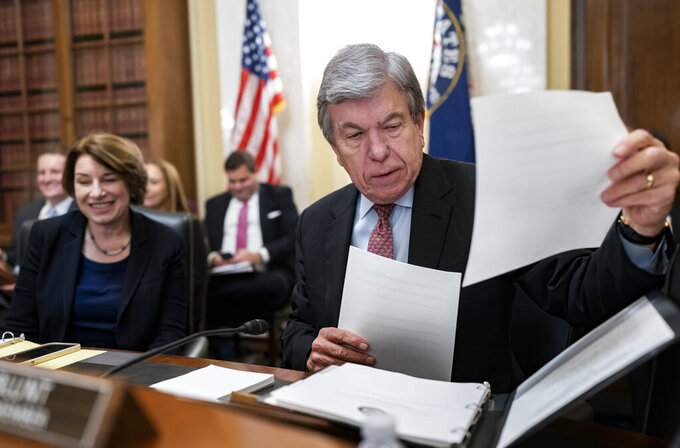 J. Scott Applewhite, ASSOCIATED PRESS
Sen. Amy Klobuchar, D-Minn., chair of the Senate Rules Committee, left, and Sen. Roy Blunt, R-Mo., the ranking member, open a meeting on the Electoral Count Reform and Presidential Transition Improvement Act, at the Capitol in Washington, Tuesday, Sept. 27, 2022. The bill is a response to the Jan. 6 insurrection and former President Donald Trump's efforts to find a way around the Electoral Count Act, the 19th-century law that, along with the Constitution, governs how states and Congress certify electors and declare presidential election winners. (AP Photo/J. Scott Applewhite)

The legislation would clarify and expand parts of the 1887 Electoral Count Act, which, along with the Constitution, governs how states and Congress certify electors and declare presidential winners. The changes in the certification process are in response to unsuccessful efforts by former President Donald Trump and his allies to exploit loopholes in the law to overturn his 2020 defeat to Joe Biden, and the violent attack on the Capitol by his supporters as Congress counted the votes.

“Congress’ process for counting the presidential electors’ votes was written 135 years ago,” McConnell said. “The chaos that came to a head on Jan. 6 of last year certainly underscored the need for an update.”

McConnell made the remarks just before the Senate Rules Committee voted 14-1 to approve the bill and send it to the Senate floor, where a vote is expected after the November election. The only senator to vote against the legislation was Republican Sen. Ted Cruz of Texas, one of two senators to stand and object to Biden's certification last year.

The GOP leader’s endorsement gave the legislation a major boost as the bipartisan group pushes to pass the bill before the end of the year and ahead of the next election cycle. Trump is still pushing false claims of election fraud and saying he won the election as he considers another run in 2024. McConnell’s support for the law could put him even more at odds with Trump, who frequently berates the GOP leader and has encouraged Republicans to vote against it.

The House has already passed a more expansive bill overhauling the electoral rules, but it has far less Republican support. While the House bill received a handful of GOP votes, the Senate version already has the backing of at least 12 Republicans — more than enough to break a filibuster and pass the legislation in the 50-50 Senate.

As he announced his support, McConnell noted that Democrats also objected to legitimate election results the last three times that Republicans won the presidency. “The situation obviously called for careful, methodical and bipartisan work,” he said, noting that the bipartisan group that negotiated the bill worked on the language for months.

McConnell called the House bill a “non-starter” in the Senate because of the bipartisan compromise on the Senate language. “We have one shot to get this right,” he said.

Sen. Amy Klobuchar, the Democratic chairwoman of the Senate Rules panel, expressed a similar sentiment. The Senate legislation is the bill that “will achieve a strong bipartisan consensus,” she said.

Cruz, who stood with Trump as he made false claims of fraud in 2020, called the legislation a “bad bill” and said it would make it harder for Congress to challenge fraudulent elections. He questioned why any Republican would support it.

The bill is all about “Democratic rage” at Trump, Cruz said.

Cruz was the lone dissenter. Among the Republicans who voted for the bill after McConnell's statement was Mississippi Sen. Cindy Hyde-Smith — one of only eight senators to oppose Biden's certification in January 2021. Missing the committee vote was GOP Sen. Bill Hagerty of Tennessee, Trump's ambassador to Japan who was in Tokyo attending the state funeral of former Prime Minster Shinzo Abe.

Senators made minor tweaks to the legislation at Tuesday’s meeting but kept the bill largely intact. The bill, written by Republican Sen. Susan Collins of Maine and Democratic Sen. Joe Manchin of West Virginia, would make clear that the vice president only has a ceremonial role in the certification process, tighten the rules around states sending their votes to Congress and make it harder for lawmakers to object.

The changes are a direct response to Trump, who publicly pressured several states, members of Congress and then-Vice President Mike Pence to aid him as he tried to undo Biden's win. Even though Trump's effort failed, lawmakers in both parties said his attacks on the election showed the need for stronger safeguards in the law.

If it becomes law, the bill would be Congress’ strongest legislative response yet to the Jan. 6, 2021, attack, in which hundreds of Trump’s supporters beat police officers, broke into the Capitol and interrupted the joint session as lawmakers were counting the votes. Once the rioters were cleared, the House and Senate rejected GOP objections to the vote in two states. But more than 140 Republicans voted to sustain them.

Differences between the House and Senate bills will have to be resolved before final passage, including language around congressional objections.

The House bill also lays out new grounds for objections, while the Senate does not.

This story has been corrected to reflect that Sen. Bill Hagerty, R-Tenn., did not participate in the committee vote because he was in Tokyo attending the state funeral of former Japanese Prime Minster Shinzo Abe.