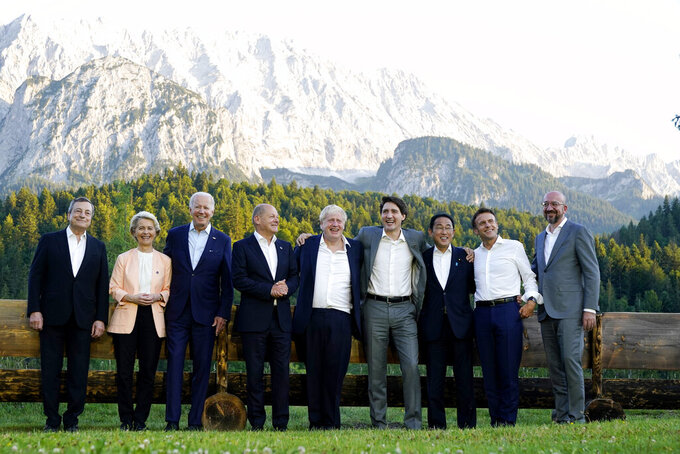 GARMISCH-PARTENKIRCHEN, Germany (AP) — Leaders of the world’s biggest developed economies are weighing a cap on the price of Russian oil meant to strike at the main pillar of the Kremlin's finances following its invasion of Ukraine — and to limit the havoc that high energy prices are wreaking worldwide.

Details haven't been agreed at the Group of Seven summit in Elmau, Germany, but the basic idea would be to tie the price cap to the services that make trading oil possible. For instance, insurers would be barred from dealing with shipments that are above the cap, wherever it winds up being set.

Because such service providers are largely based in the European Union and United Kingdom, Russia would be expected to face difficulty finding large-scale workarounds.

Limiting the price would reduce the Kremlin's income from oil — at the start of the war, it was about $450 million per day from Europe alone. The cap also would limit the impact of higher oil prices on inflation in consuming countries, with the cost of gasoline and diesel squeezing consumers and businesses.

But much would depend on whether Asian countries like India would go along with the price cap. A key question is enforcement, and European officials are also cautious about side effects.

“We want to go more into the details. ... We want to make sure that the goal is to target Russia and not to make our life more difficult,” said Charles Michel, head of the European Union’s 27-member council of governments. “We need to have a clear common understanding about what are the direct effects and what could be the collateral consequences.”

The EU has agreed to phase out the 90% of Russian oil that comes by ship by the end of the year but is chagrined that it is still paying into the Kremlin's war chest. EU countries, however, need time to line up new sources of oil and are under pressure from the high price of crude.

Governments are facing calls for even tougher action, such as an immediate end to Russian oil and natural gas shipments, a move that many economists say would trigger a recession in Europe.

Already, fears that supply from Russia would be lost to the global market has helped send global oil prices sharply higher, along with recovering demand from the COVID-19 pandemic. The OPEC+ alliance of oil-producing countries, including Saudi Arabia and Russia, has increased output but too slowly to lower prices.

Russia is selling less oil as Western buyers shun its supply, but the higher prices have erased much of the loss to state finances.

The country's central bank has managed to stabilize the ruble despite Western sanctions, in part with help from oil earnings. International benchmark Brent crude is trading at $113 per barrel, up from $79 per barrel at the start of the year.

One result has been pump prices hitting an all-time high of over $5 per gallon in the U.S. and over $7.50 in Germany.

“At current prices, this entails massive profits for the Kremlin,” said Simone Tagliapietra, an energy policy expert at the Bruegel think tank in Brussels. “Should the G-7 agree on a price cap for Russian oil, that would be a very important step to limit Putin’s windfall revenues.”

Russia has been able to find buyers outside the West as Asian customers — like India and China — have replaced the EU as the biggest buyers of oil shipped by sea.

Due to sanctions, Russian oil is trading at a steep discount to international benchmark Brent, fattening the profit margins of refiners in India who turn crude into gasoline. And some Russian oil sales have simply gone off the books.

Once Russia oil is refined into gasoline or blended with other crude, it's hard to say where it came from, especially if no one wants to look too closely.

“It is questionable whether countries like India and China will agree to cease purchasing Russian oil, especially as it is trading at a significant discount on the global market price,” said commodities analyst Carsten Fritsch at Commerzbank in Frankfurt, Germany. “Instead, India is helping Russia to continue selling its oil despite the West’s sanctions.”

Fritsch said India was willing to provide safety certification for more than 80 ships belonging to a Dubai-based subsidiary of the state Russian shipping company Sovcomflot after Western certification bodies were unable to do so because of sanctions.

Since European refiners started shunning Russian oil in late February, Russian crude oil imports to Europe fell from 2.04 million barrels per day to 1.49 million between March and May, according to Rystad Energy. Russian-origin oil imports by Asian refiners including China saw a corresponding 503,000-barrel-per-day increase.

“The expectation that Russian crude would cease to be traded on international markets has not transpired, and instead the steep discount on Russian crude has seen vessels redirected to alternative markets,” said Wei Cheong Ho, a vice president at Rystad Energy.

“While the cost of financing these vessels and trades has increased significantly due to be freezing out of the Western financial system, the discount on Urals is too attractive for some refiners to ignore,” Ho added.