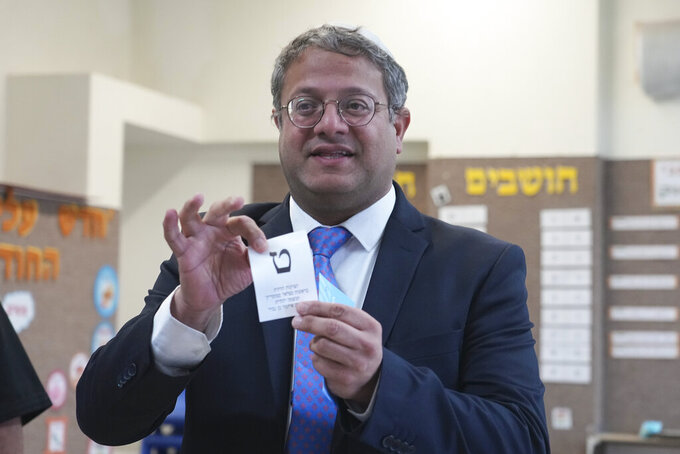 The lawmaker, Itamar Ben Gvir, has long admired Meir Kahane, the late racist rabbi. Kahane's violent anti-Arab ideology — which included calls to ban Jewish-Arab intermarriage and for the mass expulsion of Palestinians — was considered so repugnant that Israel banned him from parliament and the United States listed his party as a terrorist group. Kahane was assassinated by an Arab assailant in New York 32 years ago.

The prospect of Ben Gvir’s appointment to a key position in the new government has worried the Biden administration, which issued a stinging rebuke of his appearance at Kahane's memorial.

“Celebrating the legacy of a terrorist organization is abhorrent. There is no other word for it,” U.S. State Department spokesman Ned Price said. "We urge all parties to maintain calm, exercise restraint, and to refrain from actions that only serve to exacerbate tensions and that includes in Jerusalem.”

Ben Gvir, whose ultra-nationalist Jewish Power party emerged as the the second biggest group in Netanyahu's bloc and the third largest in the country, praised Kahane in his speech at the memorial in Jerusalem.

“I think that the main characteristic of Kahane was love. Love of Israel without compromise and without any other considerations,” he said.

At the same time, Ben Gvir has sought to portray himself as more of a moderate since entering politics, saying on Thursday that it's “no secret that today I am not Rabbi Kahane.”

Ben Gvir no longer displays in his home a portrait of Baruch Goldstein, an American-Israeli who killed 29 Palestinians and wounded over 100 in a shooting attack as they knelt in prayer at Hebron’s Tomb of the Patriarchs in 1993. He has recently urged his supporters to chant “Death to terrorists” instead of “Death to Arabs.”

But the audience was not having it on Thursday. The crowd booed as Ben Gvir told them he does “not support the expulsion of all Arabs.”

“I will not enact laws for separate beaches for Jews and Arabs,” he said. “Although, it is certain that we will act and do everything to expel terrorists from the country for the sake of the Jewish character of Israel, for the settlements and its Jewish identity.”

Even as Ben Gvir has been careful to publicly distance himself from Kahane’s most extreme beliefs, he has called for the deportation of Arab lawmakers, the death sentence for convicted terrorists and greater immunity for Israeli security forces battling Palestinian militants. Israeli commentators on Thursday argued that his very attendance at Kahane’s memorial subverts his attempts at moderation.

His party also hopes to end Palestinian autonomy in parts of the occupied West Bank. His triumph in last week's election has raised fears among Palestinians who see it as a blow to their national project. Israel captured the West Bank in the 1967 Mideast war, along with east Jerusalem and the Gaza Strip. The Palestinians seek those territories for their hoped-for independent state.

Israeli President Isaac Herzog held consultations with party leaders this week, and is expected to grant Netanyahu the mandate to form a coalition in the coming days. Netanyahu's alliance with ultra-Orthodox and ultra-nationalist parties would put him at the helm of the most right-wing government in Israeli history.