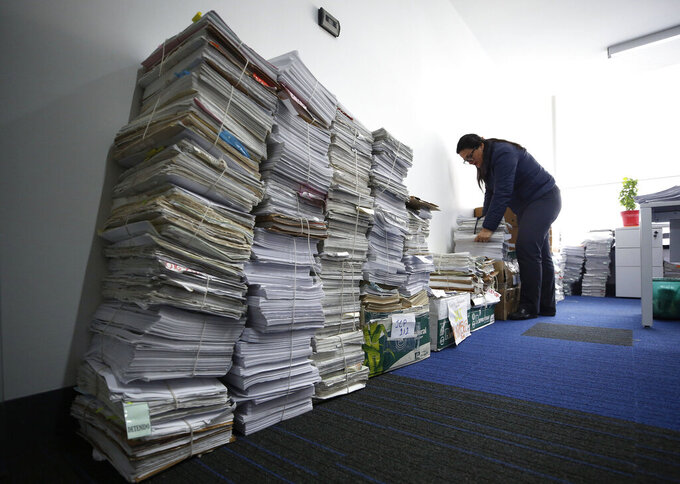 Fernando Vergara, ASSOCIATED PRESS
FILE - In this Dec. 14, 2018 file photo, a clerk goes over court files at the headquarter of the Special Peace Jurisdiction in Bogota, Colombia. The South American country's postwar reconciliation tribunal said Monday, April 19, 2021, that violence against former guerrilla fighters and community leaders is increasing in rural areas and jeopardizing its attempts to investigate crimes that took place during six decades of conflict that killed an estimated 260,000 people and forced millions to flee their homes. (AP Photo/Fernando Vergara, File)

BOGOTA, Colombia (AP) — Colombia’s postwar reconciliation tribunal said Monday that violence against former guerrilla fighters and community leaders is increasing in rural areas and jeopardizing its attempts to investigate crimes that took place during six decades of conflict that killed an estimated 260,000 people and forced millions to flee their homes.

The court known as the Special Jurisdiction for Peace was set up in 2016 following a peace deal between the government of Colombia and the country's biggest guerrilla movement, the Revolutionary Armed Forces of Colombia.

On Monday, the tribunal’s president said that at least 276 former rebels have been killed since laying down their weapons in December 2016 and that 900 community leaders have been slain as well. The court said that 252 of those former rebels had been summoned to collaborate with its investigations.

“This court’s mission is at risk if the murders and death threats do not stop,” the court’s president, Eduardo Cifuentes, wrote in a seven-page statement. “When violent groups silence human rights defenders and former fighters they don’t just hurt them and their families. They also deprive society of the chance to hear a small fragment of the truth and eliminate a potential source of reparations.”

The tribunal requested that Colombia’s human rights ombudsman produce a report that looks into the causes of the postwar crimes and deliver recommendations to the government for stopping the bloodletting.

Dozens of former army officers, guerrilla leaders and civilians have gone before the court to discuss their role in war crimes that include kidnappings for ransom, the forced recruitment of children and also cases in which soldiers seeking promotions killed civilians and dressed them up as rebel fighters.

The court offers perpetrators of these crimes reduced sentences if they help with investigations and are willing to provide reparations to victims.

But as Colombia struggles to control post-conflict violence the tribunal fears some witnesses will become too scared to come forward.

“The possibilities of restorative justice will diminish,” Cifuentes said.

Violence against community leaders and former fighters has been increasing in some rural areas of Colombia as a new generation of armed groups fights over resources — like gold mines and drug trafficking routes — that were abandoned by the FARC following the 2016 peace deal.

Colombia’s government recently created a special force of 7,000 soldiers that is to focus on fighting groups that traffic drugs and are connected to international criminal networks.