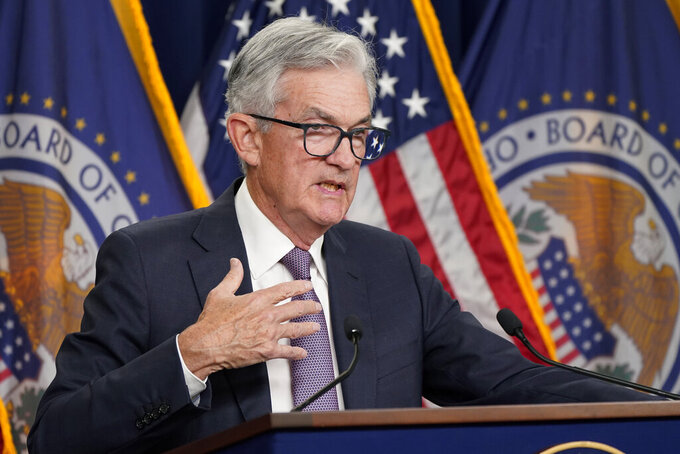 Jacquelyn Martin, ASSOCIATED PRESS
Federal Reserve Chair Jerome Powell speaks at a news conference Wednesday, Sept. 21, 2022, at the Federal Reserve Board Building, in Washington. Intensifying its fight against chronically high inflation, the Federal Reserve raised its key interest rate by a substantial three-quarters of a point for a third straight time, an aggressive pace that is heightening the risk of an eventual recession. (AP Photo/Jacquelyn Martin)

WASHINGTON (AP) — The Federal Reserve sent a sobering message Wednesday after it announced its latest big interest rate hike: It plans to keep raising rates as long as it takes to conquer the worst inflation bout in decades — even at the risk of causing a recession in the process.

Its aggressive pace of rate hikes will increasingly make borrowing and spending costly for consumers and businesses. Job cuts and rising unemployment could follow. And eventually, as the job market steadily weakens along with the economy, a recession could follow.

Given the strength of the job market — the unemployment rate is still an exceedingly low 3.7%, with plentiful job openings — most economists say a recession seems months away, at least. But most of them nevertheless think an economic downturn is inevitable.

Late last month, the government updated its estimate of the economy's performance in the April-June quarter and confirmed its earlier estimate that the economy had shrunk for two straight quarters.

Six months of contraction is a long-held informal definition of a recession. Yet nothing is simple in a post-pandemic economy in which growth is negative but the job market strong. The economy's direction has confounded the Fed's policymakers and many private economists since growth screeched to a halt in March 2020 as COVID-19 struck and 20 million Americans were suddenly thrown out of work.

Even as the economy shrank over the first half of this year, employers added 2.7 million jobs — more than in most entire years before the pandemic struck. In August, the economy added 315,000 more. The unemployment rate, at 3.7%, is barely above a half-century low. Robust hiring and exceedingly low unemployment are hardly consistent with a recession.

Inflation, meantime, remains near its highest level in four decades, though gas costs and other prices have eased in recent weeks. Inflation is still so high that despite pay raises many workers have received, Americans’ purchasing power is eroding. The pain is being felt disproportionately by lower-income and Black and Hispanic households, many of whom are struggling to pay for higher-cost essentials like food, gas and rent.

Compounding those pressures, the Fed is jacking up rates at the fastest pace since the early 1980s, thereby magnifying borrowing costs for homes and cars and credit card purchases.

So how, exactly, do we know when an economy is in recession? Here are some answers to such questions:

WHO DECIDES WHEN A RECESSION HAS STARTED?

Recessions are officially declared by the obscure-sounding National Bureau of Economic Research, a group of economists whose Business Cycle Dating Committee defines a recession as “a significant decline in economic activity that is spread across the economy and lasts more than a few months.”

The committee considers trends in hiring as a key measure in determining recessions. It also assesses many other data points, including gauges of income, employment, inflation-adjusted spending, retail sales and factory output. It puts heavy weight on jobs and a gauge of inflation-adjusted income that excludes government support payments like Social Security.

Yet the NBER typically doesn’t declare a recession until well after one has begun, sometimes for up to a year. Economists consider a half-point rise in the unemployment rate, averaged over several months, as the most historically reliable sign of a downturn.

DO TWO STRAIGHT QUARTERS OF ECONOMIC CONTRACTION EQUAL A RECESSION?

That’s a common rule of thumb, but it isn’t an official definition.

Still, in the past, it has been a useful measure. Michael Strain, an economist at the right-leaning American Enterprise Institute, has noted that in each of the past 10 times that the economy shrank for two consecutive quarters, a recession has resulted.

Still, many economists doubt that we’re in a recession now. For one thing, there's the robust job market. For another, Americans are still spending, if more tepidly. Though purchases of goods like appliances and furniture have dropped, spending on services, like airline trips and dinners out, keeps rising, indicating that millions of consumers are venturing out more.

DON’T A LOT OF PEOPLE THINK A RECESSION IS COMING?

Yes, because many people now feel more financially burdened. With wage gains trailing inflation for most people, higher prices for such essentials as gas, food and rent have eroded Americans’ spending power.

Walmart has reported that higher gas and food costs have forced its shoppers to reduce their purchases of discretionary spending such as new clothing, a clear sign that consumer spending, the leading driver of the economy, is weakening. The nation’s largest retailer, Walmart has reduced its profit outlook and said it would have to discount more items like furniture and electronics.

And the Fed’s rate hikes have helped send the average 30-year fixed mortgage rate surging above 6%, compared with below 3% a year ago, thereby making homebuying increasingly unaffordable.

Higher rates will likely weigh on businesses’ willingness to invest in new buildings, machinery and other equipment. If companies reduce spending and investment, they’ll also start to slow hiring. Rising caution among companies about spending freely could lead eventually to layoffs. If the economy were to lose jobs and the public were to grow more fearful, consumers would further reduce spending.

WHAT ARE SOME SIGNS OF AN IMPENDING RECESSION?

The clearest signal that a recession is under way, economists say, would be a steady rise in job losses and a surge in unemployment. In the past, an increase in the unemployment rate of three-tenths of a percentage point, on average over the previous three months, has meant that a recession will soon follow.

Many economists monitor the number of people who seek unemployment benefits each week, which indicates whether layoffs are worsening. Weekly applications for jobless aid have sunk to a four-month low, which means that in the midst of a labor shortage, few employers are resorting to layoffs.

ANY OTHER SIGNALS TO WATCH FOR?

Many economists also monitor changes in the interest payments, or yields, on different bonds for a recession signal known as an “inverted yield curve.” This occurs when the yield on the 10-year Treasury falls below the yield on a short-term Treasury, such as the 3-month T-bill. That is unusual. Normally, longer-term bonds pay investors a richer yield in exchange for tying up their money for a longer period.

Inverted yield curves generally mean that investors foresee a recession that will compel the Fed to slash rates. Inverted curves often predate recessions. Still, it can take 18 to 24 months for a downturn to arrive after the yield curve inverts.

For many weeks, the yield on the two-year Treasury has exceeded the 10-year yield, suggesting that markets expect a recession soon. Many analysts say, though, that comparing the 3-month yield to the 10-year has a better recession-forecasting track record. Those rates are not inverted now.

WILL THE FED KEEP RAISING RATES EVEN AS THE ECONOMY SLOWS?

The economy’s flashing signals — slowing growth with strong hiring — have put the Fed in a tough spot. Chair Jerome Powell is aiming for a “soft landing,” in which the economy weakens enough to slow hiring and wage growth without causing a recession and brings inflation back to the Fed’s 2% target.

But Powell has acknowledged that such an outcome has grown more difficult to achieve. Yet on Wednesday, he made clear that the Fed will keep raising rates, even amid a weakening economy that could slide into a recession, if that’s what’s needed to tame inflation.

“No one knows whether this process will lead to a recession, or if so, how significant that recession would be,” Powell said at his news conference. “That’s going to depend on how quickly we bring down inflation.”