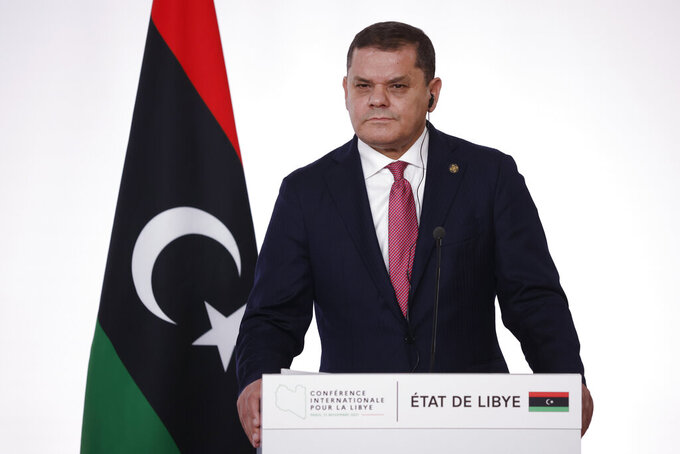 Yoan Valat, ASSOCIATED PRESS
Libyan Prime Minister Abdul Hamid Dbeibah during a press conference folowing a conference on Libya in Paris Friday, Nov. 12, 2021. France is hosting an international conference on Libya on Friday as the North African country is heading into long-awaited elections next month. (Yoan Valat/Pool Photo via AP)

TRIPOLI, Libya (AP) — Libya’s interim prime minister said Monday that he'll run for president if that's what the people want, a day after the son of the country’s late dictator Moammar Gadhafi emerged after years of hiding and announced his candidacy for the country’s top office.

The developments come as the date for long-planned elections, scheduled to take place on Dec. 24, draws nearer.

Prime Minister Abdul Hamid Dbeibah, who is meant to lead the country until a winner is declared following national and presidential elections on Dec. 24, asked a cheering crowd at a youth rally: “It’s up to you. Do you want me to run in the elections, or do you not?

Dbeibah is barred from running under Libya's current elections laws.

On Sunday, Seif al-Islam Gadhafi, the son and one-time heir apparent of Gadhafi, submitted papers in the southern town of Sabha declaring his candidacy. Seif al-Islam, who is wanted by the International Criminal Court on charges of crimes against humanity, has spent years largely in hiding.

His father was removed from power in 2011 in a NATO-backed popular uprising, after more than 40 years in power, and was hunted down and killed amid the ensuing fighting that turned into a civil war.

Dbeibah has yet to officially announce his candidacy. Under Libya’s elections laws, he would have had to step down from government duties more than three months before an election date. He also pledged when he was appointed to the interim position through U.N.-led talks that he would not run for office in the government that succeeded his. Those talks were marred by allegations of bribery.

In an apparent reference to the Gadhafi family, Dbeibah also referenced a recent controversy involving Libya's foreign minister who is facing suspension after telling the BBC that the government could work with the United States on extraditing a man wanted in the 1988 Lockerbie bombing. The downing of the commercial flight over Scotland killed 270 people. Gadhafi's government had accepted responsibility for the attack and paid compensation to victims' families after years of sanctions.

“Who got us to Lockerbie?” Dbeibah asked the crowd. “Who put us under sanctions, travel bans. It cannot be repeated.”

The long-awaited vote still faces challenges, including unresolved issues over laws governing the elections, and occasional infighting among armed groups. Other obstacles include the deep rift that remains between the country’s east and west, split for years by the war, and the presence of thousands of foreign fighters and troops.

Seif al-Islam’s reemergence has already caused controversy in Libya. Gadhafi’s second-born son, he was captured by fighters in the town of Zintan late in 2011 and detained until 2017. Since then, he largely disappeared from the public eye until last July, when he told The New York Times in an exclusive interview that he was considering a run for the country’s top office.

Seif al-Islam, who has deeply rooted links to tribes across Libya, is the first major presidential hopeful to submit his candidacy to run for the country’s highest post. However, he is likely to face stiff resistance from armed groups and militias particularly in the capital, Tripoli, and the western town of Misrata.

Some Libyans have expressed dismay that the current front-runner in the largest elections since Gadhafi's time is his son.

“I am against Seif al-Islam’s candidacy, because he is a person who is not convinced of democracy at all,” said Tripoli resident Abdulmalik Al-Sufrani. "We know Seif and we know his stance during the February revolution, as he was fighting against the government that we were establishing.”