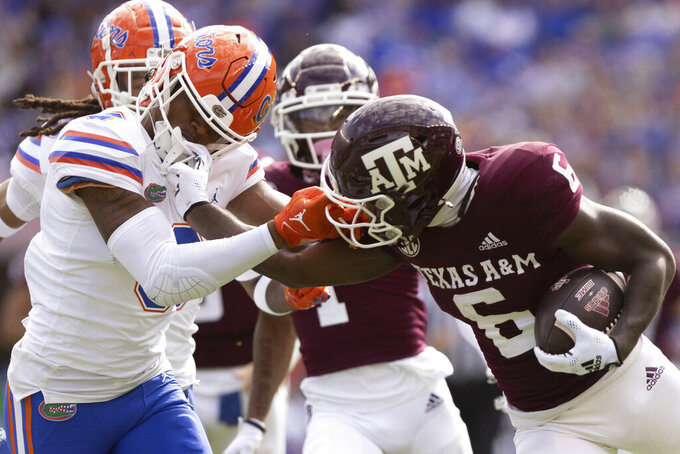 Both teams are trying to salvage something positive from very disappointing seasons. The winner snaps a five-game losing streak and escapes the bottom of the SEC West. The loser is assured of a losing season. Auburn has already fired coach Bryan Harsin and appointed former star running back Carnell Williams to lead the Tigers through the last few games. Texas A&M's Jimbo Fisher will face even more heat if the Aggies lose this one, though he has a mammoth buyout of more than $85 million.

Texas A&M: Freshman QB Conner Weigman is expected to make his second start after missing the Florida game with a virus. The former five-star recruit passed for 338 yards and four touchdowns without an interception in his starting debut against No. 11 Mississippi.

Auburn: Ashford makes Auburn's offense go even when he's not having much success passing. He passed for just 75 yards on 7-of-22 attempts at Mississippi State but also ran for 108 yards and two touchdowns.

Texas A&M has won the last two meetings. ... It's Auburn's second game under Williams, including a 39-33 overtime loss to Mississippi State. ... Aggies running back Devon Achane leads the SEC and ranks fifth nationally averaging 155 all-purpose yards per game. ... Auburn produced only a first-quarter field goal in last year's 20-3 loss to Texas A&M, and managing just 73 rushing yards. ... Ashford just became the first Auburn quarterback to rush for 100 yards in a game since Nick Marshall did it against the Bulldogs in 2014.