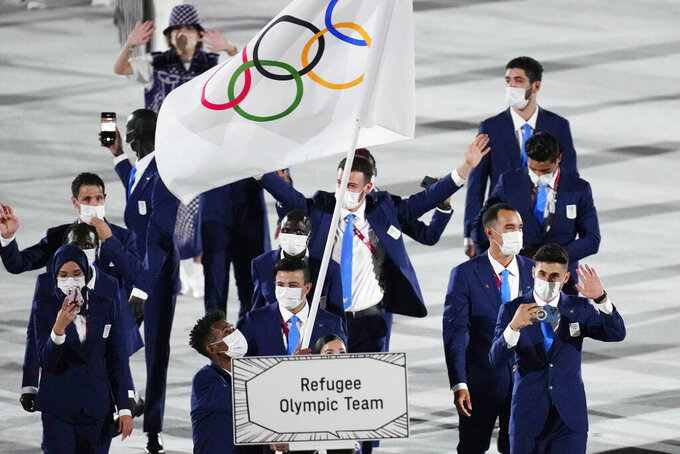 David J. Phillip, ASSOCIATED PRESS
FILE - Yusra Mardini and Tachlowini Gabriyesos, of the Refugee Olympic Team, carry the Olympic flag during the opening ceremony in the Olympic Stadium at the 2020 Summer Olympics in Tokyo, Japan, Friday, July 23, 2021. The Olympic Refugee Foundation and the refugee Olympics team are the winners of this year’s Princess of Asturias Award for sports, the Spanish foundation that organizes the prizes said Wednesday, May 25, 2022. (AP Photo/David J. Phillip, File)

MADRID (AP) — The Olympic Refugee Foundation and the refugee Olympics team are the winners of this year’s Princess of Asturias Award for sports, the Spanish foundation that organizes the prizes said Wednesday.

The prize jury said that their work to help refugee athletes “merges the highest values of sport, such as integration, education, solidarity and humanity, and represents a message of hope for the world.”

The International Olympic Committee and the United Nations High Commissioner for Refugees founded the refugee team so athletes forced by strife to leave their nations could still compete. The team first participated in the 2016 Rio de Janeiro Games with 10 athletes from Ethiopia, Congo, Syria and South Sudan. For the 2020 Tokyo Games, the team had 29 members.

The Olympic Refugee Foundation was created to help displaced athletes continue their careers and to foster their wider development.

The Princess of Asturias Award jury praised the winners “for the opportunity they afford athletes in conflict zones and places where human rights are violated, preventing them from being able to perform their sporting and personal activities.”

The foundation and team were chosen out of a total of 24 nominees.

The 50,000-euro award ($52,600) is one of eight prizes, including in the arts, communication and science, handed out annually by the foundation.

The awards are among the most prestigious in the Spanish-speaking world. An awards ceremony typically takes place in October in the northern Spanish city of Oviedo.

Former winners of the prize for sports include American track and field athlete Carl Lewis, and tennis players Steffi Graf of Germany and Rafael Nadal of Spain.