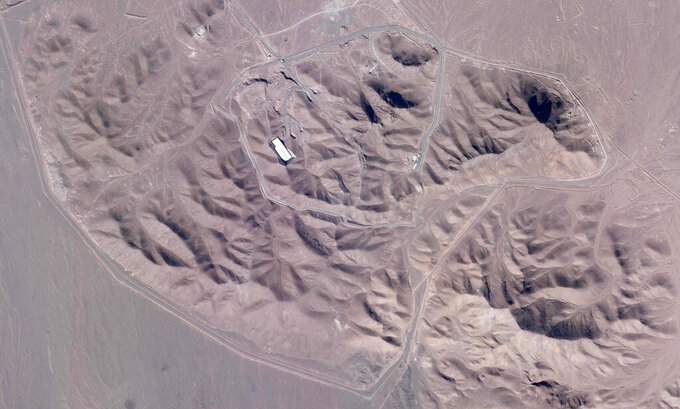 Planet Labs Inc., ASSOCIATED PRESS
This satellite picture from Planet Labs Inc. shows Iran's underground Fordo nuclear facility outside of Qom, Iran, Oct. 23, 2021. After a monthslong hiatus, Iran has returned to negotiations in Vienna aimed at reviving its cratered nuclear deal with world powers. But Tehran isn't slowing down the advances in its atomic program, further raising the stakes in talks crucial to cooling years of tensions boiling in the wider Mideast. (Planet Labs Inc. via AP)

DUBAI, United Arab Emirates (AP) — After a monthslong hiatus, Iran has returned to negotiations in Vienna aimed at reviving its cratered nuclear deal with world powers. But Tehran isn't slowing down the advances in its atomic program, further raising the stakes in talks crucial to cooling years of tensions boiling in the wider Mideast.

The case in point? Iran's underground nuclear facility in Fordo.

The International Atomic Energy Agency, the United Nations body charged with monitoring the Islamic Republic's program, acknowledged Wednesday that Iran began feeding a cascade of 166 advanced IR-6 centrifuges with uranium there. The agency said Iran plans to enrich uranium there up to 20% purity — a short, technical step from weapons-grade levels of 90%.

Tehran's diplomatic mission to Vienna sought to downplay the acknowledgement on Twitter as “an ordinary update in line with regular verification in Iran.” However, even in clinical language the announcement offers a stark contrast to what existed under the 2015 nuclear deal, which saw Iran limit its enrichment of uranium in exchange for the lifting of economic sanctions.

The deal halted all enrichment at Fordo, which sits under a mountain near the holy Shiite city of Qom, some 90 kilometers (55 miles) southwest of Tehran. The accord also called for Fordo to become a research-and-development facility.

The deal focused on Fordo because the site long has been a major point of contention for the West. It is about the size of a football field, large enough to house 3,000 centrifuges, but small and hardened enough to lead U.S. officials to suspect it had a military purpose when they exposed the site publicly in 2009.

Then-President Barack Obama, alongside France's president and Britain's prime minister, dramatically announced to the world Iran had built the site after years of tensions over Tehran's program.

“As the international community knows, this is not the first time that Iran has concealed information about its nuclear program,” Obama said at the time.

Iran asserted Fordo's secret construction came as part of its “sovereign right of safeguarding … sensitive nuclear facilities through various means" as it faced the threat of military attack. But burying the facility under some 80 meters (260 feet) of dirt and rock while not informing international inspectors as required only heightened Western concerns. U.S. intelligence agencies and international inspectors believe Iran had an organized nuclear weapons program until 2003.

Now, just days into the new negotiations in Vienna, Iran has acknowledged the higher enrichment there with advanced centrifuges also barred by the accord. It may be another hard-line negotiation tactic like the others embraced by the diplomatic team under new President Ebrahim Raisi.

But pressing too many demands too fast while advancing Iran's nuclear program may alienate Britain, China, France, Germany and Russia, the other parties to the accord. Iran's state-run IRNA news agency reported Thursday that Iranian negotiators also handed over two new documents of demands.

It also makes re-entering the deal that much more politically complicated for President Joe Biden. His negotiators remain outside of the room where the talks are going on due to his predecessor Donald Trump unilaterally withdrawing from the deal in 2018, sparking years of wider tensions in the Mideast that continue today.

A breakdown in the talks or further advances by Iran raise regional risks. Already, Tehran finds itself locked in a wider shadow war with Israel. Iranian officials blame Israel for attacks on its Natanz nuclear site, as well as the gunning down of a scientist identified as the founder of its military nuclear program.

Some of those attacks came under former Prime Minister Benjamin Netanyahu, who long targeted Iran. Israel's new premier, Naftali Bennett, has kept up that pressure. Bennett spoke Thursday with U.S. Secretary of State Antony Blinken and described Iran as carrying out “nuclear blackmail as a negotiation tactic" with its enrichment at Fordo, according to a statement from his office.

An Israeli official said the country assesses that Iran could produce enough 90%-enriched uranium for a single nuclear bomb within a month. Even if Iran had enough weapons-grade material, it would need to choose to construct a bomb itself — still a complicated engineering feat. Tehran insists its program is peaceful.

The Israeli official, speaking on condition of anonymity because he was not authorized to comment publicly, said that Israel still considers a military strike against Iran to be a viable option and is preparing for all scenarios.

Israeli leaders have said they would still prefer a diplomatic solution reaching a “longer, stronger” deal that includes Iran’s missile program and its support of regional militias. But they insist any diplomacy must be accompanied by a credible military threat.

Israel hasn't shied in the past from conducting airstrikes to halt its neighbor's nuclear ambitions, whether in Iraq in 1981 or Syria in 2007. It remains unclear, however, what that line in Iran would be for Tel Aviv.

What also remains unclear is how Israel could strike a target as deep as Fordo. After the facility's discovery, the U.S. rushed to finalize its Massive Ordnance Penetrator — a 13,600-kilogram (30,000-pound) bomb able to penetrate deep into the ground before exploding. That bomb remains in American hands, however, and it's unlikely Israeli air force fighters could even carry it given its mammoth size.

But, if Iran is right, Israel was able not once but twice in a year to cause explosions at its Natanz nuclear site. One such blast targeted Natanz's underground enrichment halls as well. An Israeli television program that featured outgoing Mossad intelligence chief Yossi Cohen in June suggested spies somehow planted explosives under the halls' marble flooring during construction.

EDITOR’S NOTE — Jon Gambrell, the news director for the Gulf and Iran for The Associated Press, has reported from each of the Gulf Cooperation Council countries, Iran and other locations across the world since joining the AP in 2006. Follow him on Twitter at www.twitter.com/jongambrellAP.