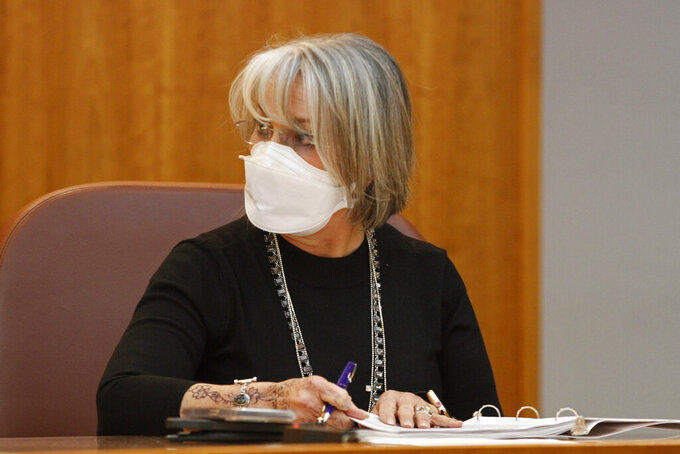 Morgan Lee, ASSOCIATED PRESS
New Mexico Gov. Michelle Lujan Grisham, including State Canvassing Board members Secretary of State Maggie Toulouse Oliver and state Supreme Court Chief Justice Shannon Bacon, certify results from the midterm election in New Mexico in a 3-0 vote, amid praise for election administrators and poll workers, Tuesday, Nov. 29, 2022, Santa Fe, N.M. The board meeting at the state Capitol building was the culmination a once-routine election certification process that in some locations has become a focal point for those voicing distrust in voting systems. (AP Photo/Morgan Lee)

SANTA FE, N.M. (AP) — New Mexico Gov. Michelle Lujan Grisham is traveling to a convention of Democratic governors in New Orleans on the heels of her reelection victory, with additional engagements in Philadelphia and Washington, D.C.

Lujan Grisham's office announced Friday in a statement the start of a four-day tour that includes the keynote speech at a public health policy convention in Philadelphia.

The convention touches on themes of opportunity for youths, strategies for reducing gun violence and more. Lujan Grisham plans to highlight her administration's efforts to combat poverty, hunger and other societal problems that influence public health.

Lujan Grisham served as chairwoman in 2021 of the Democratic Governors Association that focuses on getting Democrats elected across the country.

Democrats held onto a string of competitive governors’ seats in the midterm elections after making the case to voters that Republican challengers posed a threat to abortion rights and democracy in their states, while flipping partisan control in Massachusetts, Maryland and Arizona. California Gov. Gavin Newsom campaigned for Lujan Grisham in New Mexico in the final weeks before the Nov. 8 election.

Lujan Grisham, a former congresswoman, also plans visit with members of Congress as Republicans prepare to take control of the House majority in January. Democrats in November flipped New Mexico's only Republican congressional seat with the election of Gabe Vasquez in District 2, a majority-Hispanic district that stretches from Albuquerque to the U.S. border with Mexico.

House Democrats ushered in a new generation of leaders this week with Rep. Hakeem Jeffries elected to be the first Black American to head a major political party in Congress.