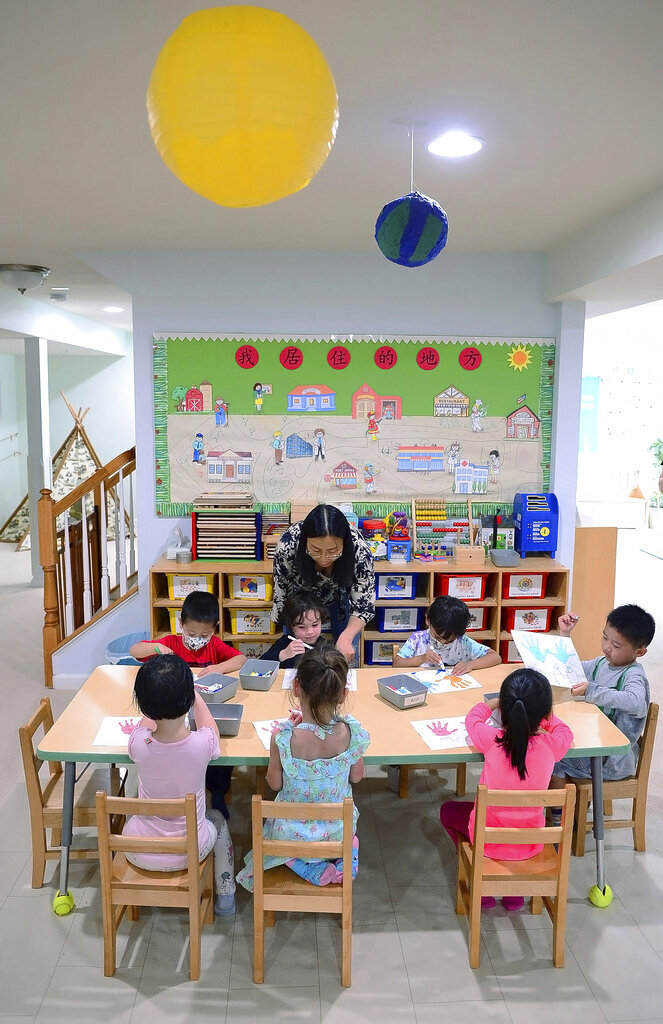 FREDERICK, Md. (AP) — In the spacious basement of her Urbana home, Li Zhou commanded rapt attention from the preschoolers sprawled on the carpet before her.

She read to them from a picture book about kindness. The book was written in English, but before turning each page, Zhou would speak to the children in Mandarin Chinese — describing drawings to them, asking them questions and cracking jokes.

Zhou runs A&D Stars, a Chinese immersion preschool program and day care for children 2 to 5 years old. It opened in 2015.

She’s also part of a group working to open a language immersion charter school in Frederick.

MeriSTEM Public Charter School would offer Spanish and Chinese language tracks and nurture bilingualism in young children, according to a nearly 200-page application submitted to the Frederick County Board of Education earlier this year.

It would focus on science, technology, engineering and math, and employ an “experiential learning” approach emphasizing hands-on activities.

The school would give priority to English learners, whom the founders hope would eventually make up 20% of the student body.

Victoria Thornton, who enrolled her 4-year-old twins in Zhou’s preschool in March 2021, did the bulk of the writing for MeriSTEM’s application. She studied psychology and neuroscience at Stanford University, and said she wanted her children to be bilingual even though she is not.

“Looking around Frederick, I just saw there’s obviously no possibility for continued Mandarin immersion,” Thornton said. “So when I approached Li, I thought, ‘Maybe if she’s interested, we could start a charter school.’ ... And she said, ‘You share the same dream as me.’”

Zhou and her colleagues don’t actively teach Mandarin to their preschoolers. Instead, they aim to speak to them in Chinese for about 80% of the school day — though the breakdown varies from child to child, Zhou said, depending on their familiarity with the language.

Young children are “sponges,” Zhou said, and immersing them in a second language early gives them a far better shot at fluency.

“They acquire it naturally,” Zhou said. “They don’t even have to think about it.”

About half of her current students are exposed to Mandarin at home, Zhou said. But even those with no initial Chinese skills pick it up during their time in the preschool. After three years with her, many children can hold a conversation in Mandarin, Zhou said.

But when they leave Zhou’s preschool and enter the Frederick County Public School system, Zhou said, many of the students probably will lose touch with the language.

“I kind of feel sad for them. It’s a lost opportunity,” Zhou said. “Some do come back to visit, and I can feel the difference.”

Originally, Thornton and Zhou said, the pair envisioned a school focused on Chinese immersion. Later, they added a Spanish option, hoping it would appeal to more families and attract enough students to get off the ground.

Public charter schools receive some government funding, but they operate separately from the local school system and are responsible for paying many of their own bills.

Zhou and Thornton applied to the school board in May for MeriSTEM with the goal of opening in the fall of 2023. The school’s name comes from a type of plant cell found at the growing tips of roots and branches.

The school board planned to discuss the proposal on Aug. 10, when it would have heard FCPS Superintendent Cheryl Dyson’s recommendation.

The district superintendent doesn’t vote on whether to approve a charter school application, but her recommendation is a starting point for the board’s discussions.

In her response to MeriSTEM’s application, Dyson noted that the dual-language immersion program would be unique for Frederick County and the school would likely have strong community partnerships.

But she expressed concern about the school’s budget and that it hadn’t nailed down a facility.

Dyson also noted that bilingual teachers are in short supply, and said the founders hadn’t made a sufficient plan for translating curriculum materials.

She recommended that the board deny MeriSTEM’s application.

Dyson’s comments were uploaded to BoardDocs, the school board’s site for sharing documents with the community, about a week before the Aug. 10 meeting.

Zhou and Thornton withdrew their application shortly after and are working to address Dyson’s concerns.

Both women said they weren’t giving up on the school. They plan to resubmit the application in about six months, Thornton said.

“We were basically told that the application needs to be bulletproof to get it approved,” Thornton said.

In addition to Zhou and Thornton, 19 other people are listed on the application as “founding members.” They include a doctor, a physicist, a teacher, an engineer, and a pastor from a Chinese church.

Zhou said most founding members were either parents of her preschool students or parents from her lengthy waiting list. Some people register for the waiting list as soon as their children are born.

Both wrote that the school would be a valuable addition to the west side of Frederick, where the founders said they hoped to locate.

In another letter of support, the Maryland Alliance of Public Charter Schools (MAPCS) wrote that the school “has the expertise, momentum, commitment, and community support to provide innovative and exemplary dual language immersion and STEM programming to Frederick County students and families.”

Plus, the alliance wrote, MeriSTEM was one of two founding groups from across the state chosen for its “Mentorship Cohort,” meaning Thornton, Zhou and others from the school would receive a year of training and technical support from MAPCS.