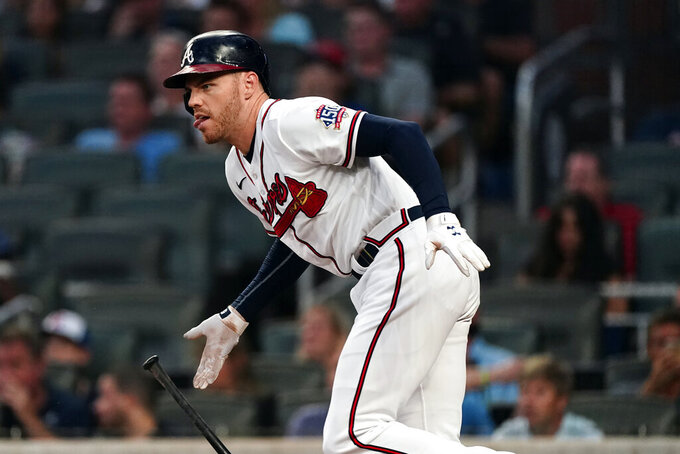 John Bazemore, ASSOCIATED PRESS
Atlanta Braves first baseman Freddie Freeman (5) drives in a run with a base hit in the first inning of a baseball game against the Colorado Rockies Tuesday, Sept. 14, 2021, in Atlanta. (AP Photo/John Bazemore)

ONE WAY TO GO?

Two-way star Shohei Ohtani was scratched from his scheduled start for the Angels against Oakland because of a sore right arm that could sideline him as a pitcher for the rest of the season.

“If there’s any kind of lingering soreness, you may not see him pitch,” Angels manager Joe Maddon said prior to Thursday’s game against the Chicago White Sox.

Ohtani (9-2, 3.36 ERA) felt soreness while playing catch Wednesday. Maddon said there are currently no plans for Ohtani to be examined by a doctor, nor has it been determined when he would try to resume playing catch.

The arm discomfort won’t prevent Ohtani from continuing to hit. Ohtani is third in the major leagues with 44 home runs.

Cut by Philadelphia this week, the 29-year-old righty is set to start the series opener at St. Louis in a matchup of NL wild-card contenders. Blake Snell was originally lined up to pitch, but he was put on the injured list with a strained adductor. Padres starter Chris Paddack also is out with elbow inflammation.

“Knowing the opportunity at hand, that they’re down a couple starters, I have three weeks left to help them in a push,” he said. “I know that it hasn’t probably been the strongest year on my behalf. But I think a new scenery, a new team ... will help.”

In August, the Padres tried to boost their rotation with a veteran pitcher, signing Jake Arrieta after he was released by the Cubs. Arrieta is 0-2 with an 8.25 ERA in three starts for San Diego.

Corey Kluber, who twice won the AL Cy Young Award during his nine seasons with Cleveland, pitches against the Indians for the first time.

Kluber (4-3, 4.02 ERA) takes on former teammate José Ramírez and a few other familiar faces when he starts for New York at Yankee Stadium.

The Yankees begin the day a half-game behind AL wild card co-leaders Toronto and Boston.

Kluber was 98-58 and a three-time All-Star with the Indians before being traded away as part of the team’s roster overhaul. The 35-year-old righty pitched one game for Texas last season and then joined the Yankees.

Freddie Freeman and the Atlanta Braves begin a three-game series against Brandon Crawford and the San Francisco Giants in a matchup of NL division leaders.

The Braves (76-68) are looking to hold off Philadelphia in the NL East, and the major league-leading Giants (95-52) are being pushed by the World Series champion Dodgers out West. The teams also played in August, with the Braves taking two of three in Atlanta.

Astros left-hander Framber Valdez was scratched from his latest scheduled start after cutting the index finger on his pitching hand.

Valdez was supposed to start Thursday night for the AL West leaders at Texas. Houston manager Dusty Baker said Valdez was cut Wednesday when he put his hand on the outfield wall during batting practice at the year-old home of the Rangers.

That’s the same finger Valdez broke early in spring training when he was hit on the hand by a line drive from Francisco Lindor of the Mets, sidelining him for two months.