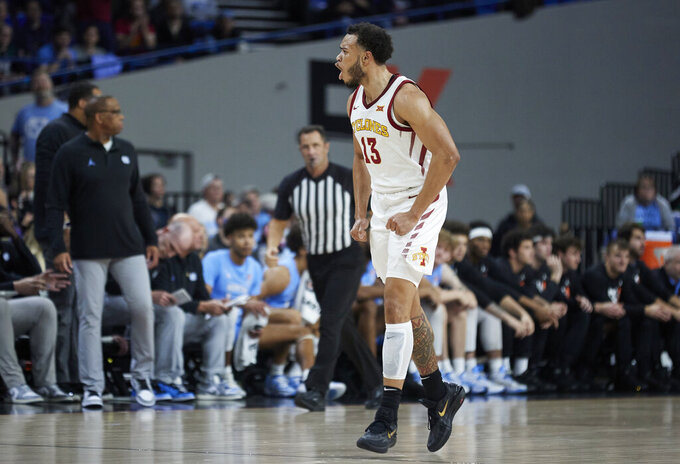 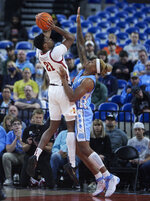 PORTLAND, Ore. (AP) — Caleb Grill has followed T.J. Otzelberger from South Dakota State to UNLV and now back to Iowa State hoping the pair could share a moment like they did Friday.

Taking down the No. 1 team in the country was another bookmark moment in a long journey for the pair.

“I’m actually really enjoying sitting next to him from this moment right now just thinking about how long we’ve known each other and how cool this really was,” Otzelberger said.

Grill hit seven 3-pointers and scored a career-high 31 points and Iowa State rallied in the final five minutes to stun No. 1 North Carolina 70-65 in the semifinals of the Phil Knight Invitational.

The Cyclones can now add North Carolina (5-1) to the list.

“I was just staying the course of the game. I never really thought about it and the game just kind of came to me,” Grill said.

Grill was averaging 7.3 points and had made just 4 of 24 3-point attempts for the season entering Friday. But he couldn’t be stopped from beyond the arc, hitting a pair of big 3s to spark Iowa State’s late rally. His deep fadeaway jumper just inside the 3-point line with 1:40 left gave Iowa State a 63-61 lead and the Cyclones did just enough at the free throw line in the final minute to close out the upset victory.

Grill’s previous career high was 27 points while playing for UNLV in the 2020-21 season against Alabama. He also hit seven 3-pointers in that game.

Grill originally signed with South Dakota State when Otzelberger was the coach there. He was released from his commitment when Otzelberger took the head job at UNLV and started his career at Iowa State before deciding to join his coach in Las Vegas.

“Just having him be the first person that really had belief in me, it's just really special what he’s done for me and my family and everything we’ve done," Grill said.

Jaren Holmes added 22 points and the Cyclones withstood off shooting games from Aljaz Kunc and Gabe Kalscheur, who combined for three points and missed all eight of their shot attempts. Both were averaging double figures scoring for Iowa State.

RJ Davis led North Carolina with 15 points, Armando Bacot added 14 and Caleb Love scored 12. But the Tar Heels will lament a series of mistakes in the closing minutes that allowed Iowa State to rally.

North Carolina led 57-49 after Leaky Black’s layup with 5:43 left, but missed four of its final six shots and had four turnovers during that span.

“We turned the ball over a couple of times and you just can’t do that in late-game situations,” Davis said. “You have to be sound and discipline and you have to do that on both ends of the floor and we just didn’t do it.”

North Carolina: Pete Nance wasn’t able to contribute in the same way he did in Thursday’s opening round. Nance, who tied his career high with 28 points against Portland, didn’t score for the first 27 minutes and finished with seven points.

Iowa State: The Cyclones were playing a No. 1 team from outside their conference for the first time since 1999 when they faced Cincinnati in the championship game of the Big Island Invitational.

Iowa State will face either No. 18 Alabama or No. 20 UConn in the championship game while the Tar Heels will face the loser for third place.