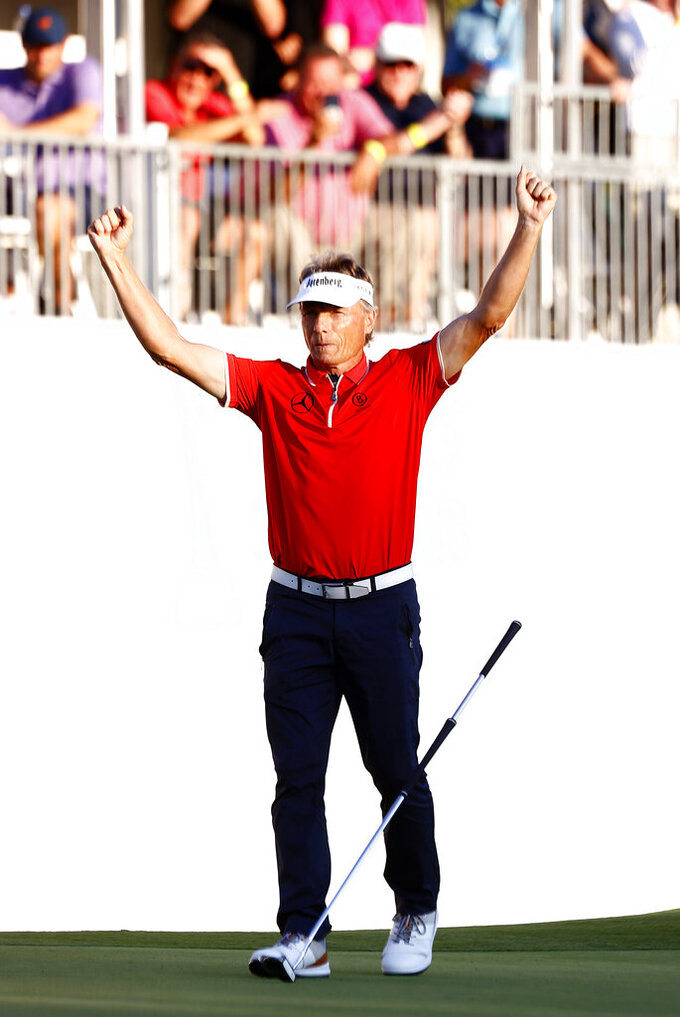 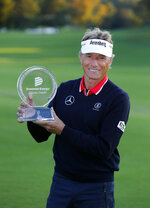 JACKSONVILLE, Fla. (AP) — The bearded maintenance worker pounded his hammer into a metal spike next to the tee as Padraig Harrington prepared to hit. He dragged a hose across the green and accidentally doused Darren Clarke before a putt.

This was no ordinary member of the grounds staff at Timuquana Country Club.

It was Bernhard Langer in disguise.

Turns out the 64-year-old German can be quite the prankster. His victims during this PGA Tour Champions pro-am included Harrington, Clarke, Phil Mickelson and Tim Tebow, three of whom are British Open champions.

As for his golf? Langer takes that seriously and always has.

How else to explain how someone could be just as devoted to practice and fitness as he was 49 years ago when he turned pro as a 15-year-old in the tiny village of Anhausen? How he could win two Masters, be the first No. 1 player in the world, be inducted into the World Golf Hall of Fame and then win in each of his 15 years on the 50-and-older circuit?

“He's 64. I feel like a puppy next to him,” Ernie Els said. “But he plays like a young man and he's got that desire still, which is incredible.”

Langer took his place in the record book Sunday in Virginia when he holed a 6-foot birdie putt in a playoff to win the Dominion Energy Charity Classic. His 42nd career victory made him the oldest player to win on the PGA Tour Champions.

“When you get to my age, you never know if you're going to win again. It's as simple as that,” Langer said. “Hopefully, this won't be the last one. But if it is, it was very special. To become the oldest so far to win out here, it's not easy.”

The previous mark for an individual event was Mike Fetchick, who was 63 when he won the Hilton Head Seniors Invitational in 1985. Since then, there have been six winners at 62 or older on the PGA Tour Champions. Langer has done it twice.

Mark O'Meara is on that list, and he raves about Langer. He referred him as “the kid” — Langer is seven months younger — perhaps out of habit because that's what O'Meara used to call Tiger Woods back in the day.

Langer makes him think of Woods for only one reason: This kind of performance doesn't come along very often.

“What I witnessed in Tiger Woods' era was something special, and we might not see that for quite a long time,” O'Meara said Monday evening from his home in Las Vegas.

“What Bernhard has done — look, I understand it's not the PGA Tour or European Tour — but to compete at the level he has is similar to what Tiger did for 10 years," he said. "To perform at a high level at his stage in life and be that committed is ridiculous.”

O'Meara won the Masters and British Open in 1998, joining Jack Nicklaus and Ben Hogan as the only players in their 40s to win two majors in the same year. He was inducted into the World Golf Hall of Fame in 2015. The PGA Tour Champions is more of a victory lap than a grind. O'Meara last played a month ago at Pebble Beach and arrived as late as possible.

“My caddie would get there early and he says Bernhard is out there on the putting green at 7:30 a.m. on Tuesday, and the tournament doesn't even start until Friday,” O'Meara said. “It's obviously not about money (Langer has earned a record $31.8 million at the senior level). It's about pride and determination.”

Langer won his fourth start after turning 50 in 2007 and he hasn't stopped.

He has finished in the top 10 in 68% of his tournaments, and the top 3 in 36% of his starts. He already holds the record of 11 senior majors, and he is three victories away from Hale Irwin's career record on the PGA Tour Champions.

Langer is the latest — and maybe greatest — reminder that golf is ageless. In the same year he won at age 64, Mickelson won the PGA Championship a month before 51, making him the oldest major champion.

This wasn't an out-of-the-blue moment for Langer. In the 32 events since his last victory, he was a runner-up four times, most recently at Pebble Beach. He was getting frustrated.

“It doesn't get easier when you get older,” Langer said. “There's a lot of young guns out here trying to take over.”

Young is relative on the PGA Tour Champions, though the newcomers are more impressive with each year — Mickelson, Els, Jim Furyk, Retief Goosen, Steve Stricker.

Langer keeps plugging away, because that's all he's ever done. He won 42 times in 509 starts on the European Tour. He has 42 wins in 292 starts since turning 50. And now he's closing in on a sixth Charles Schwab Cup title. No one else has won it more than twice.

“If you sit down and see how many tournaments he's won in his career — and he's been a professional since he was 15 — you talk about 50 years playing as a professional and he's still at it,” Els said. “It's an incredible story.”