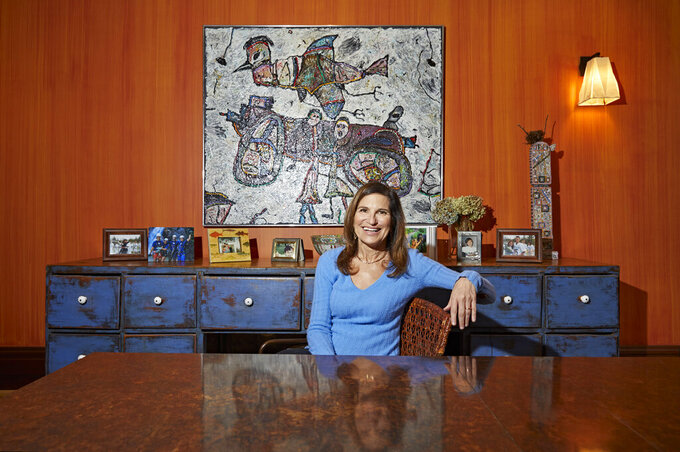 Gabriela Hasbun, ASSOCIATED PRESS
This photo provided by Shutterfly shows Shutterfly CEO Hillary Schneider. As other technology companies lay off workers and try to cut costs in other ways amid a post-pandemic comedown, Schneider is gearing up for what is expected to be a busy holiday season for digital photo and printing company. The reason: Orders are already pouring in for photo books capturing moments from all the postponed vacations, weddings and other diversions people could finally enjoy this year after being cooped up during the pandemic. (Gabriela Hasbun/Shutterfly via AP)

SAN FRANCISCO (AP) — While other technology companies lay off workers and try to cut other costs amid a post-pandemic comedown, Shutterfly CEO Hilary Schneider is gearing up for a busy holiday season. Orders are pouring in for the digital photo and printing company's photo books, which capture moments from all the postponed vacations, weddings and other diversions people could finally enjoy this year.

Schneider, who became Shutterfly's CEO in 2020 shortly after Apollo Global Management took the company private in a $2.7 billion deal, also sympathizes with the belt-tightening at other technology companies. Her past experience includes being CEO of Red Herring, a technology magazine that collapsed during the dot-com bust 20 years ago, and working as a top executive at Yahoo during the Great Recession of 2008 and 2009. She recently shared her perspective with The Associated Press.

Q: How do you view the current state of the economy?

A: We're certainly going through an economic reconciliation here. It’s hard to remember what that’s like because we have been in a bull market for so long. But those of us with some gray hair have seen this before. I think the reality is it’s a choppy environment. While we are not in a recession yet, there are certainly things that are impacting everyone already. You have the war in Ukraine, you have inflation, you have supply chain issues, and higher labor costs with nearly full employment.

So that puts everyone in a cautious mode because of the lack of predictability about not only the next day or the next week, but what the next month is going to be. When my boys were young, I remember in soccer they would line them up and teach them to get into a crouch so you could react to the ball. I feel like that's what all these businesses are doing right now,

Q: We have seen thousands upon thousands of layoffs at major tech companies in recent weeks. Do you think this will be a prime opportunity for smaller tech firms to add talent?

A: I was recently at a good friend's 60th birthday party that had an interesting group there and everyone was talking about cutbacks. What I heard from the venture investors who were there is that they are in a more conservative mode just because they are trying to preserve cash for their existing portfolio (of funded companies). So you just look at number of new companies being funded, I think that number will go down. And that means there will be less of a call for new talent. Everybody is a little more risk averse in this current environment.

Q: Do you expect the tougher economy to yield any new growth opportunities?

A: The smarter companies — and I know we certainly are thinking about it this way — will remember the adage about not letting any downturn go by without taking advantage of it. Ultimately, I think some of the smarter companies are thinking, “OK, this is a harder economic environment but what are the jujitsu moves you can make right now?” So you are a company with more resources and more brand recognition than smaller competitors, you are going to be trying to make moves that allow you to come out of this downturn in a situation where you have actually gained market share.

Q: Is it strange to see a company like Yahoo where you once worked go from a technology powerhouse to an afterthought?

A: The interesting thing about something like Yahoo is there is still significant residual value in brands like that. I don't know the specifics, but I think if you look at AOL, which was sort of the original internet, there is still a significant number of people with AOL email. There are habits that get formed and alliances that continue. There are companies that continue reinventing themselves, but unfortunately you also see technology companies that hit a peak and then didn’t catch that next wave.