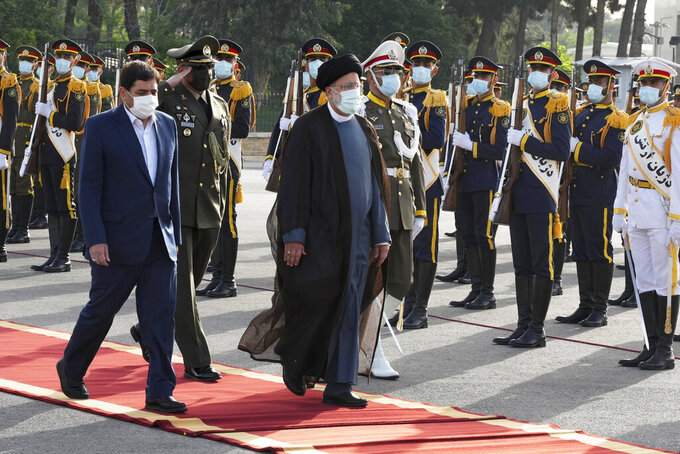 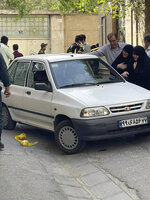 DUBAI, United Arab Emirates (AP) — Iran's hard-line president vowed revenge on Monday over the killing of a senior Revolutionary Guard member gunned down in the heart of Tehran the day before, a still-mysterious attack on the country's powerful paramilitary force.

Iranian President Ebrahim Raisi hailed Col. Hassan Sayyad Khodaei as a martyr and blamed “the hand of global arrogance,” a reference to the United States and its allies, including Israel, for his slaying.

There has been no claim of responsibility for the killing, carried out on Sunday afternoon by two unidentified gunmen on a motorbike. They shot Khodaei five times in a car, an unarmored SAIPA Pride — among the cheapest, most-common Iranian vehicles.

But the style of the brazen attack bore the hallmarks of previous slayings in Iran blamed on Israel, such as those targeting the country's nuclear scientists.

“I have no doubt that revenge against the criminals for the blood of this martyr is assured,” Raisi said at the airport before leaving Tehran for a state visit to the sultanate of Oman, a strategic Gulf Arab state that traditionally mediates between Tehran and the West.

His remarks signaled Khodaei's prominence in the murky structure of the Guard, which exerts extensive control inside Iran and across the Middle East via allied militias. In yet another sign of Khodaei’s power, Tehran city council announced it would name a street after him.

The Guard identified Khodaei as a “defender of the shrine,” a reference to Iranians who fight against the extremist Islamic State group in Syria and Iraq within the elite Quds Force that oversees operations abroad. Iran's state-run IRNA news agency described his role on Monday as "managing the advisory activities” of the Quds Force in the Levant region, without elaborating.

While Iran has yet to offer any definitive biographic information on Khodaei, Israeli media on Sunday night ran simultaneous stories alleging Khodaei had organized plots against Israeli diplomats, businesspeople and other foreign officials abroad.

The news reports, all of which ran without attribution, suggest Israeli intelligence officials briefed journalists on the Iranian colonel. There was no official comment from the Israeli government.

While Tehran has reacted with condemnation, officials have not acknowledged Khodaei's particular loss to the Guard. Iran will hold a funeral ceremony on Tuesday, local media reported.

Two of Khodaei’s neighbors jolted on Sunday by the sound of gunshots told state TV they had no idea he was a military man. One of them, an unidentified woman, told reporters she had suspected a brutal robbery as she caught a glimpse of the assailant speeding away from Khodaei’s shattered car windows.

The killing of Khodaei comes at a fraught time for the country. Negotiations with the Biden administration aimed at restoring the tattered nuclear agreement remain deadlocked, apparently over whether to lift the U.S. terrorism designation on the Guard. The European Union’s envoy for the nuclear talks visited Tehran earlier this month in hopes of finding a compromise, apparently without result.

With Israel’s support, former President Donald Trump withdrew America from Tehran’s nuclear accord with world powers in 2018 and re-imposed sanctions.

The stranglehold of U.S. sanctions along with government mismanagement has led to soaring inflation, high youth unemployment and rising poverty. Raisi's administration has struggled to halt the economic tailspin.

With pressures mounting in the wake of Russia's war on Ukraine and global supply chain snarls, the Iranian government last month slashed subsidies for imported wheat and raised prices as much as 300% for other food staples.

As the Iranian currency, the rial, shrivels in value and people watch their incomes diminish with surging prices, strikes over salary disputes among bus drivers and teachers have gained traction. Security forces have arrested protesters and officials have downplayed the unrest, with Raisi over the weekend saying that “hard decisions” needed to be taken even if people disagreed.

The sultanate of Oman, where American and Iranian diplomats quietly drew up Tehran's 2015 nuclear deal with world powers, gave Raisi a royal welcome on Monday as he touched down in Muscat.

Officials signed a raft of preliminary deals in the oil and gas sector, as well as agriculture and transportation. Ahead of the visit, the countries agreed to revive an undersea gas pipeline project to carry Iranian gas to the sultanate, long hamstrung by sanctions and other disputes, Iranian media reported.

As Iran’s global isolation deepens, Raisi has stressed the importance of shifting the country's foreign policy focus away from the West and toward its regional neighbors.