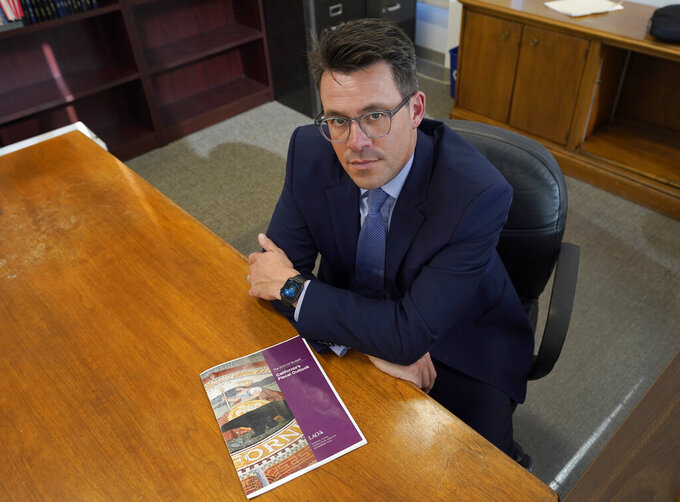 Rich Pedroncelli, ASSOCIATED PRESS
Legislative Analyst Gabriel Petek, is seen with a copy of his office's analysis of the state's fiscal outlook for 2023-24, that was released on Wednesday, Nov. 16, 2022, in Sacramento, Calif. California will likely have a $25 billion budget deficit next year, ending a run of historic surpluses. (AP Photo/Rich Pedroncelli)

SACRAMENTO, Calif. (AP) — California will likely have a $25 billion budget deficit next year, state officials announced Wednesday, ending a run of historic surpluses and acting as a warning to other states about a potential recession.

Democratic-controlled California taxes rich people more than other states, meaning most of its drop in revenue is because the uber-wealthy aren't making as much money as they used to. That's why California is often one of the first states to have budget problems when the economy starts to falter.

The S&P 500, a key indicator of the health of the stock market that drives the income of the superrich, has fallen more than 17% since its peak in January. State revenues are now $41 billion below expectations, according to an outlook published Wednesday by the nonpartisan Legislative Analyst's Office. The estimated deficit is lower because some of those revenue losses were offset by lower spending in other parts of the budget.

The shortfall won't endanger some of California's major expansions of government services, including free kindergarten for 4-year-olds and free health care for low-income immigrants living in the country without legal permission.

“While we’re in fact better prepared, that doesn’t mean that the decisions to close the coming budget gap won’t be difficult — particularly if the economic conditions that have slowed the economy continue, or get worse,” California Department of Finance spokesman H.D. Palmer said.

Despite the gloomy outlook, California is in a better position to weather an economic downturn than it has been in the past. The state has $37.2 billion stored in its various savings accounts. And it has plenty of cash available to meet its obligations this year.

“It’s not insignificant, but it’s also manageable,” Legislative Analyst Gabriel Petek said of the deficit. “We don’t think of this as a budget crisis.”

California's revenues are famous for their volatility, peaking and plummeting quickly at the whims of the stock market. Just two years ago, state officials predicted a $54 billion deficit because of the pandemic — a shortfall that never happened because the economy remained strong.

But this latest deficit prediction is more likely to stick. Soaring inflation has made everything more expensive. The Federal Reserve has tried to rein in inflation by raising a key interest rate. A higher interest rate makes it more expensive to borrow money, which eventually causes people to spend less. Although that would control price increases, it also cuts demand for goods and services. That leads to layoffs, meaning people pay less in taxes.

“The chances that the Federal Reserve can tame inflation without inducing a recession are narrow," the LAO said in its report.

Although employment in California remains strong — the 3.9% unemployment rate for September is tied for the lowest since 1976 — the high-wage tech industry has been roiled by a series of recent job cuts. Facebook parent Meta announced last week that it would layoff 11,000 people, or 13% of its workforce.

The report did not surprise Republicans, who said they have been warning against California's massive increase in public spending for years, with Republican Assembly member Vince Fong calling it “unsustainable.”

“Today’s report is another wake-up call to those warnings. We must refocus on fiscal responsibility,” said Fong, who is vice chair of the Assembly Budget Committee.

“The good news is that as we prepare to close a budget shortfall, the state is in its best-ever position to manage a downturn, by having built strong reserves and focusing on one-time commitments,” said Palmer, the Department of Finance spokesman.

California lawmakers could conceivably cover all of the deficit with the money it has in its savings accounts, but the Legislative Analyst's Office warned them not to do that. Their outlook predicts deficits not just for this year, but the next three years — although the size of the deficit decreases each year.

Instead, the Legislative Analyst's Office says lawmakers should delay some of the $75 billion in one-time spending they approved over the past two years. As an example, they pointed to a $500 million program to clean up homeless encampments across the state.

“That's a very good example of the type of pause we had in mind,” Petek said.

Palmer said the Newsom administration will begin making budget decisions next month. A change in statewide homelessness funding appears to be unlikely, given Newsom's commitment to addressing the issue. Newsom did pause $1 billion in homelessness spending earlier this month, but that decision wasn't related to sinking revenues.

Toni Atkins, the Democratic president pro tempore of the California Senate, said she is confident the state can pass a budget this year “without ongoing cuts to schools and other core programs or taxing middle class families.”

“In particular, the Assembly will protect California’s historic school funding gains, as districts must continue to invest in retaining and recruiting staff to help kids advance and recover from the pandemic," Rendon said.