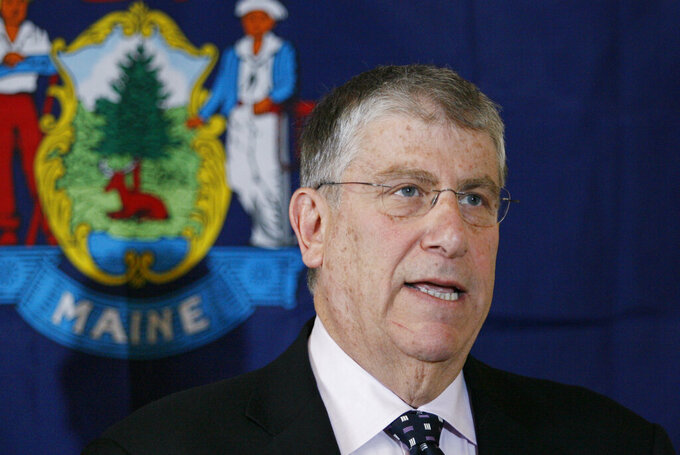 ELLSWORTH, Maine (AP) — A former Maine gubernatorial candidate charged with possession of child pornography can get back online, a judge ruled Tuesday, even as an affidavit was unsealed indicating the defendant possessed thousands of videos of young children being sexually abused.

The affidavit indicated law enforcement began investigating Eliot Cutler upon learning of a video showing child exploitation that was allegedly linked to the IP address of Cutler's home in Brooklin.

That was the tip of the iceberg.

A search of the home yielded flash drives, USB drives and external hard drives, and investigators found more videos of children being sexually assaulted, according to the affidavit by Glenn Lang, special agent with the Maine State Police Computer Crimes Task Force. The affidavit didn’t indicate Cutler was involved in making or distributing child pornography — just that he possessed it.

The court documents were unsealed Tuesday as a defense attorney attended an initial court appearance on behalf of Cutler.

During the hearing, Hancock County Deputy District Attorney Toff Toffolon described the defendant as having “a longstanding, untreated and severe addiction to child pornography.”

Defense attorney Walter McKee used the hearing as an opportunity to ask the judge to modify bail conditions so Cutler could have access to the internet for banking and other legal activities.

Justice Robert Murray granted Cutler access to an internet-connected laptop and smartphone under a monitoring plan with special software that produces alerts if sexually explicit images are accessed.

It was the first court appearance since Cutler, 75, was arrested on March 25, two days after the search of the Brooklin home and another home in Portland. No plea was entered Tuesday.

Cutler was released on $50,000 bail after his arrest on four counts of possession of sexually explicit material of a child under 12.

The charges were a shock. Cutler ran for governor twice as an independent and used his personal wealth to bankroll both campaigns. In his first campaign, he lost by less than 2 percentage points to Republican Paul LePage in a multi-candidate race in 2010. He lost again four years later.

Years ago, Cutler served as an aide to the late Democratic U.S. Sen. Edmund Muskie and later as former Democratic President Jimmy Carter’s top adviser for environmental and energy issues. Cutler went on to serve as an environmental attorney and helped found a law firm in Washington.

The arrest followed a two-month investigation that started with a tip from the National Center for Missing and Exploited Children.