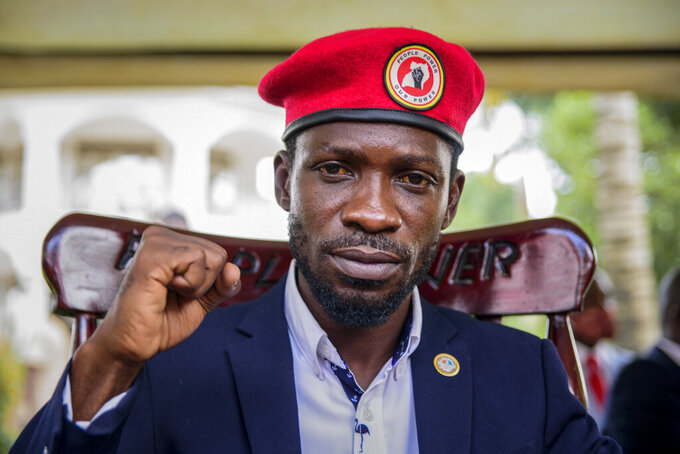 Nicholas Bamulanzeki, ASSOCIATED PRESS
FILE - In this Tuesday, Jan. 26, 2021 file photo, opposition presidential challenger Bobi Wine, whose real name is Kyagulanyi Ssentamu, gestures as he speaks to the media outside his house after government soldiers withdrew from it, in Magere, near Kampala, in Uganda. Ugandan opposition figure Bobi Wine has been arrested Monday, March 15, 2021 while leading a protest in the capital Kampala against the detention of many of his supporters before, during and after presidential elections in January that were won by long-time leader Yoweri Museveni. (AP Photo/Nicholas Bamulanzeki, File)

KAMPALA, Uganda (AP) — Ugandan opposition figure Bobi Wine was arrested Monday while leading a protest against the detention of many of his supporters in the aftermath of a presidential election.

Police arrested Wine near a public square in the capital and then drove him back to his home outside Kampala. “His home is now surrounded by police and the military,” said Wine's Twitter account.

The Daily Monitor newspaper published a photo of Wine being taken away by police while he held a poster saying “BRING BACK OUR PEOPLE."

“Don't fight,” Wine told his supporters when armed police grabbed him and his associates while a charging crowd in the background repeatedly shouted his name, according to footage from the scene in downtown Kampala. “Don't give them a reason.”

Wine has called on authorities to free hundreds of his supporters arrested before, during and after January's presidential election in which he challenged longtime leader Yoweri Museveni.

Museveni was declared the winner of the Jan. 14 elections with 58% of the vote while Wine had 35%. Wine called those results fraudulent, citing cases of soldiers allegedly stuffing ballot boxes, casting ballots for people and chasing voters away from polling stations.

Authorities accuse Wine, a 39-year-old singer and lawmaker whose real name is Kyagulanyi Ssentamu, of trying to lead violent protests that could cause the collapse of Museveni's government. Wine says he is leading a nonviolent movement.

Museveni, a 76-year-old former guerilla leader who took power by force in 1986 and has since been elected six times, is popular among many Ugandans for bringing relative stability and security. Museveni himself has castigated former leaders such as Idi Amin, whose regime was notorious for kidnappings and extrajudicial killings.

But opposition figures such as Wine accuse Museveni of increasingly ruling like his predecessors. They say corruption and alleged abuses by the security forces have become more widespread as Museveni tries to extend his rule.

Museveni recently dismissed allegations that his forces have illegally detained civilians, saying his army “is a disciplined force” and that his party “does not kill” its opponents. But he acknowledged that he had beefed up security ahead of the elections by deploying soldiers from a commando unit previously deployed in Somalia who “killed a few” people he described as terrorists.

Museveni warned in a televised address Sunday night that opposition supporters who allegedly plan to disrupt his inauguration in May face arrest.

Uganda has never seen a peaceful transfer of power, one reason why even some within Museveni’s party openly say he must groom a successor.