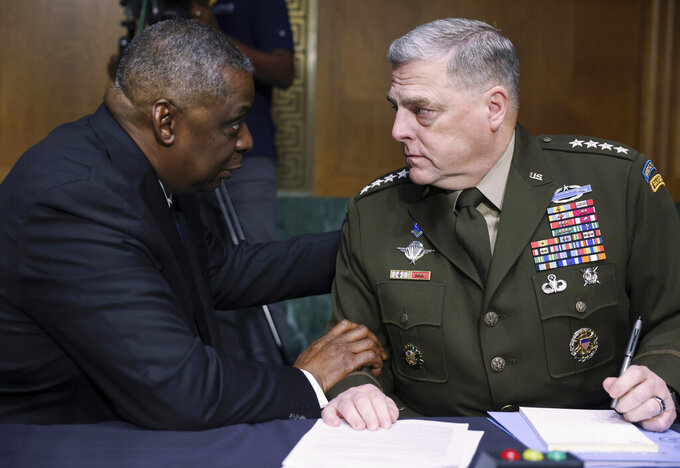 WASHINGTON (AP) — An extremist group like al-Qaida may be able to regenerate in Afghanistan and pose a threat to the U.S. homeland within two years of the American military's withdrawal from the country, the Pentagon's top leaders said Thursday.

It was the most specific public forecast of the prospects for a renewed international terrorist threat from Afghanistan since President Joe Biden announced in April that all U.S. troops would withdraw by Sept. 11.

At a Senate Appropriations Committee hearing, Sen. Lindsey Graham, R-S.C., asked Defense Secretary Lloyd Austin and Gen. Mark Milley whether they rated the likelihood of a regeneration of al-Qaida or the Islamic State group in Afghanistan as small, medium or large.

“I would assess it as medium," Austin replied. “I would also say, senator, that it would take possibly two years for them to develop that capability."

Milley, the chairman of the Joint Chiefs of Staff and a veteran of the war in Afghanistan, said he agreed.

“I think that if certain other things happen — if there was a collapse of the government or the dissolution of the Afghan security forces — that risk would obviously increase, but right now I would say ‘medium’ and about two years or so," Milley said.

Their responses underscored the overall military fears about the consequences of a complete, unconditional withdrawal. Military leaders over the past few years have pushed back against administration efforts — including at times by then-President Donald Trump — to pull out of Afghanistan by a certain date, rather than basing troop numbers on the security conditions on the ground.

Milley also acknowledged that a collapse of the government or takeover by the Taliban could have broader impacts on the strides women have made in Afghanistan. And the military has said it will be far more difficult to collect intelligence on terror groups in the country, if there is no American presence there.

Once the withdrawal is completed, U.S. military and intelligence agencies' ability to monitor and counter extremist groups inside Afghanistan will be limited, but the Pentagon says it will use “over-the-horizon" forces to keep a lid on the threat. The hope is to place surveillance aircraft and other assets in one or more neighboring countries, but no such arrangements have yet been made. That means the counterterrorism effort will have to be conducted from bases farther away, in the Persian Gulf area.

A related concern is that the Taliban, which are seeking greater political leverage in Kabul and could attempt to take power, may retain its associations with al-Qaida, whose presence in Afghanistan was the reason the U.S. invaded in the first place. U.S. officials have questioned whether the Taliban will fulfill a promise made in a February 2020 agreement with the Trump administration to disassociate itself from al-Qaida and to prevent any extremist group from launching attacks on the U.S. from Afghan soil.

The Biden administration has acknowledged that a full U.S. troop withdrawal is not without risks, but argued that waiting for a better time to end U.S. involvement in the war is a recipe for never leaving, while extremist threats fester elsewhere.

“We cannot continue the cycle of extending or expanding our military presence in Afghanistan, hoping to create ideal conditions for the withdrawal, and expecting a different result,” Biden said, when announcing the withdrawal plan in April. He added, "It's time to end America’s longest war.”

The U.S. invaded Afghanistan after the Sept. 11, 2001, terror attacks on America, when the Taliban allowed al-Qaida safe haven in the country. The key goal of U.S and coalition troops in Afghanistan since then has been to prevent a resurgence and another attack against America or other allies.

Military leaders have consistently said that combat operations in Afghanistan have greatly reduced the number of al-Qaida there. But they say that both al-Qaida and IS continue to aspire to attack America.

Austin and Milley's warnings about a possible resurgence of terrorist groups in Afghanistan echo those of some outside analysts.

A group of experts on Afghanistan, including retired Gen. Joseph Dunford, who served as the top commander in Afghanistan before becoming chairman of the Joint Chiefs of Staff in 2015, said in a report published in February that a “precipitous withdrawal” from Afghanistan could lead to a reconstitution of the terrorist threat to the U.S. homeland within 18 months to three years. The group, whose study was mandated by Congress, said the U.S. should keep troops in Afghanistan until tangible progress is made toward a peace settlement between the Taliban and the Afghan government.

The Pentagon has said the U.S. withdrawal after nearly 20 years in Afghanistan is a little more than half completed, and U.S.-led coalition partners also are leaving.