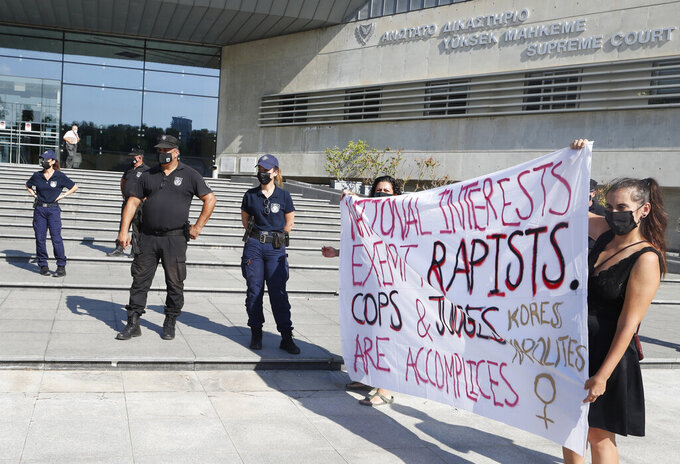 Philippos Christou, ASSOCIATED PRESS
Protesters hold a banner in support of a British woman who is appealing her conviction for making false claims that she was gang raped by as many as a dozen Israelis, as police officers stand guard in front of Cyprus' Supreme Court in the capital Nicosia on Thursday, Sept. 16, 2021. Lawyers for the British woman sentenced to a four-month suspended sentence for making up the gang rape claims during a 2019 Cyprus holiday are appealing to the country's Supreme Court to overturn the conviction. (AP Photo/Philippos Christou)

NICOSIA, Cyprus (AP) — Lawyers for a British woman sentenced to a four-month suspended sentence for making up claims that she was gang raped by as many as a dozen Israelis during a vacation in Cyprus in 2019 are appealing to the country’s Supreme Court to overturn the conviction.

A legal team is arguing at Thursday’s hearing that the lower court shouldn’t have admitted the woman’s written retraction of the rape claims as evidence because investigators obtained it after she sat in a police station for seven hours without a lawyer or an interpreter present.

The team headed by British lawyer Lewis Power said that the woman — whose identity hasn't been formally released and was 19 at the time of her trial — was suffering from a stress disorder and had been pressured into making an “unreliable” retraction.

Moreover, the team said the “discourteous” lower court judge failed to provide the woman with a “fair hearing,” because he didn’t give defense lawyers the chance to put forward evidence supporting the woman’s claims.

Lewis said in a written statement that the legal team believes that “ultimately justice will be achieved” so that the woman “can free herself from the shackles of an unjust conviction which has tarnished her young life.”

Lead prosecutor Adamos Demosthenous told The Associated Press that the state would “support the correctness of the original ruling” and stands by it.

A group of around 30 activists from the Network Fighting Violence Against Women held banners and chanted slogans in support of the woman, including “national interests absolve rapists, police and judges are also guilty” and “rapists are to blame for rape, not short blouses and miniskirts.”

Judge Michalis Papathanasiou said in his original ruling that he would give the woman a “second chance” and not send her to jail, because she admitted through her lawyers during mitigation that she made a mistake in making the false rape claim.

Papathanasiou said the defendant didn’t tell the truth and tried to deceive the court with “evasive” statements in her testimony. He said the woman had admitted to investigators that she made up the claims because she was “ashamed” after finding out that some of the Israelis had videoed her having consensual sex with her Israeli boyfriend on their cellphones. He had also said her admission was “the only time the defendant told the truth.”

The case drew widespread interest in the U.K. and Israel after initial reports that the woman was the victim of a gang rape evolved into her being charged with making up claims of rape. The guilty verdict also triggered strong reaction from activist groups.

The woman insisted that she was raped in a hotel room at a coastal resort town in July 2019 and that she was forced to sign the retraction 10 days later while under police questioning. All of the Israelis, aged 15-20, were then released and allowed to return home.

The British government said it had raised “numerous concerns” with Cypriot authorities about the judicial process in the case and the woman’s right to a fair trial.