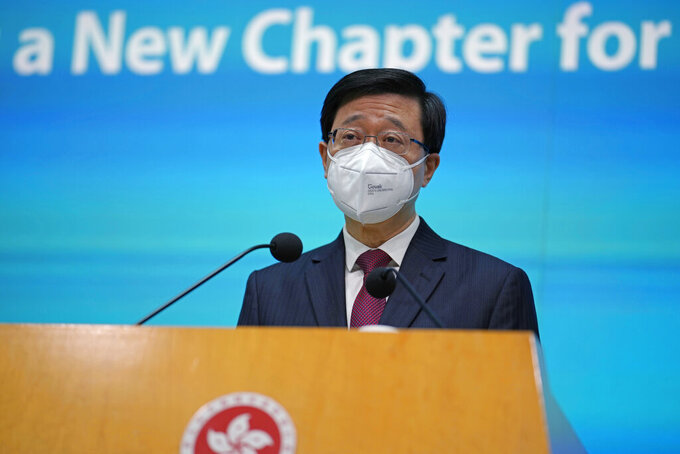 Kin Cheung, ASSOCIATED PRESS
Hong Kong Chief Executive John Lee speaks during a news conference in Hong Kong, Tuesday, July 5, 2022. Lee said Tuesday in his first news conference since taking the reins that he will work towards legislating easing restrictions for travelers, but that it must be balanced with limiting the spread of the coronavirus so as not to overwhelm the healthcare system. (AP Photo/Kin Cheung)

HONG KONG (AP) — Hong Kong’s new leader John Lee said Tuesday at his first news conference since taking office that he will work on easing restrictions for travelers while balancing the risks of a coronavirus outbreak overwhelming the health care system.

Hong Kong and mainland China are among the few places in the world that still quarantine arrivals to reduce the spread of the virus two and a half years in the pandemic. Most travelers coming to Hong Kong are required to serve a seven-day mandatory quarantine at designated hotels.

Lee, a former security official who was the only candidate in the election for Hong Kong's chief executive, took office Friday, succeeding Carrie Lam.

Speaking at his first news conference ahead of an Executive Council meeting Tuesday, Lee said Hong Kong is an “international city” and that he was “conscious” of the need for Hong Kong to remain open and convenient to travelers.

“But it is also important that we address the risks at the same time so that we will maintain good balance,” he said. Lee said the city's health minister was evaluating data to determine how the quarantine duration could be adjusted and would formulate options for Lee to consider.

COVID-19 cases have been rising in Hong Kong, with more than 1,000 daily since mid-June, compared to just over a hundred daily in early May. The city reported 1,841 new infections on Monday.

Lee also said Hong Kong had a “constitutional duty” to enact a new security law, in addition to the national security law imposed by Beijing in 2020 that has wiped out most political dissent and put many democracy supporters under arrest, in hiding or in exile.

Enacting Article 23 of the Basic Law, Hong Kong’s mini-constitution, has long been controversial. When the government first attempted to draft such laws in 2003, protesters took to the streets in a massive demonstration that prompted the government to shelve its plans.

The crackdown that followed 2019 protests included reshaping Hong Kong's legislature. Should Lee enact Article 23, the laws are likely to pass in the body now filled with pro-Beijing lawmakers.

Lee said Hong Kong’s situation and levels of security risks will be assessed before the legislation is enacted. “We’re very confident that we will be able to do it well,” he said.

Lee also pledged to work on housing issues in Hong Kong — the most expensive property market in the world — stating that he will try and “fix short-term issues as quickly as possible” and will look at how to turn available land into “spade-ready sites” to increase the speed and efficiency of housing production.