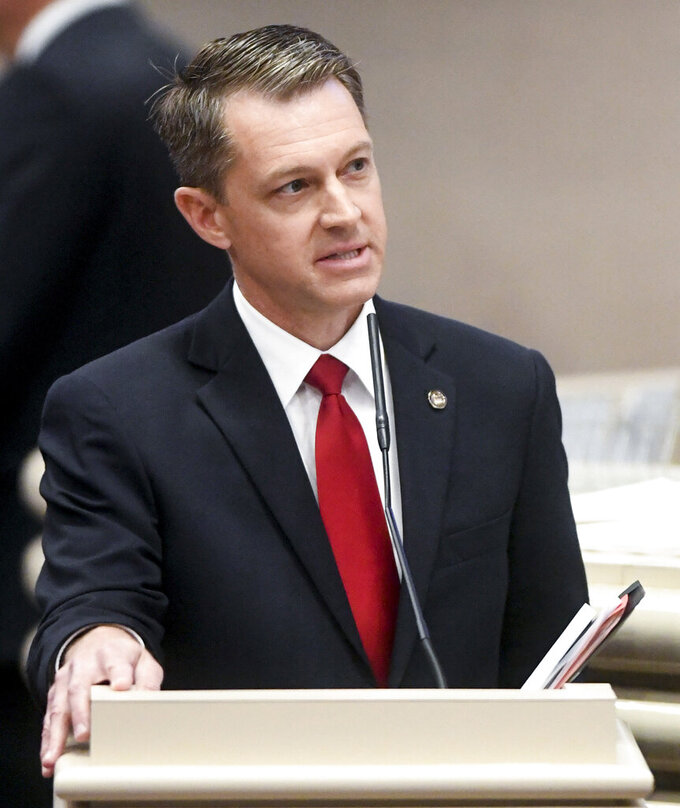 The party nominations for five statewide offices including secretary of state on the Republican side and governor on the Democratic ticket are on the ballot in Tuesday's primary runoff election in Alabama. The GOP nomination for a lone congressional seat also will be decided. Here is a look at the races:

Jim Zeigler, who was barred from seeking another four years as state auditor because of term limits, dubbed himself a “watchman” against ballot fraud, so-called “ballot harvesting” and voting by mail. Trump has blamed all those and more for his loss to Democratic President Joe Biden, and many GOP voters believe him despite a lack of evidence.

Rep. Wes Allen is a state representative from Troy who previously served as probate judge in Pike County. Citing the potential for fraud, he opposes early voting and no-excuse absentee balloting and sponsored a law that barred “curbside” voting meant in part to make it easier for people with disabilities to cast a ballot.

Either Yolanda Rochelle Flowers or state Sen. Malika Sanders Fortier will become the first Black person to win a major party's gubernatorial nomination in Alabama in the Democratic runoff for governor.

Flowers, a career educator from Birmingham, narrowly led a six-person field in the May primary. She ran on a platform of “reconstructing” Alabama by rebuilding its economy and systems for education, health care and criminal justice. Among other things, she has advocated for a state lottery and a state minimum wage of $15.

Fortier, a state lawmaker from Selma, campaigned on the theme of building the biblical “beloved community” promoted by the Rev. Martin Luther King Jr. by improving the state's economy, schools and health care. She is the daughter of former state Sen. Hank Sanders and attorney Faya Rose Toure.

The eventual winner face Gov. Kay Ivey, who vanquished eight challengers to win the GOP primary without a runoff. Nearly four times as many people voted in the Republican primary as the Democratic primary in May, and Republicans hold every statewide office.

Stan Cooke and Andrew Sorrell are vying for the Republican nomination to succeed Zeigler as state auditor.

Cooke, a pastor from the Jefferson County town of Kimberly, claims Alabama is at a crossroads where it could remain a conservative state or come under the control of liberal Democrats. Echoing former President Donald Trump's false claims of election theft, he is highlighting the auditor's role in appointing county election officials who can prevent Democrats from stealing elections.

Sorrell, a state representative from Colbert County who led balloting in the May primary, also tried to make election security a prime issue, saying a strong auditor is needed to appoint county registrars who will keep voter rolls clean.

The eventual nominee will not have a Democratic opponent in the fall.

North Alabama's 5th District features the only runoff for one of the state's seven U.S. House seats.

In the Tennessee Valley region, Madison County Commission chair Dale Strong and Casey Wardynski, a former Huntsville school superintendent, advanced to a runoff from a field of six candidates in May. Strong led easily with about 45% of the vote but couldn't avoid a runoff.

The winner will face Democrat Kathy Warner-Stanton of Decatur.

The 5th District seat is being given up by U.S. Rep. Mo Brooks, who is in a runoff with former business lobby leader Katie Britt for the seat being vacated by U.S. Sen. Richard Shelby.

Two Republican incumbents on the Alabama Public Service Commission face runoff challenges to keep their jobs on the utility-regulating board.

Jeremy Oden, a former state legislator from Cullman seeking his third term on the three-member commission, cast himself as a conservative bulwark against liberal environmental policies. He received the most votes in May in a four-way race for the Place 1 seat that saw attorney Brent Woodall, a PSC staffer and Republican activist, come in second.

First elected to the PSC in 2014, former Greene County Commissioner Chip Beeker also portrayed himself as an opponent of Democratic environmental policies in his campaign to retain the Place 2 seat. Beeker, who led the primary vote, is opposed by Robert L. McCollum, a small business owner from Tallapoosa County who contends the commission is too close to Alabama Power Co.

No Democrat qualified for either position, making a victory in the Republican runoff tantamount to election.